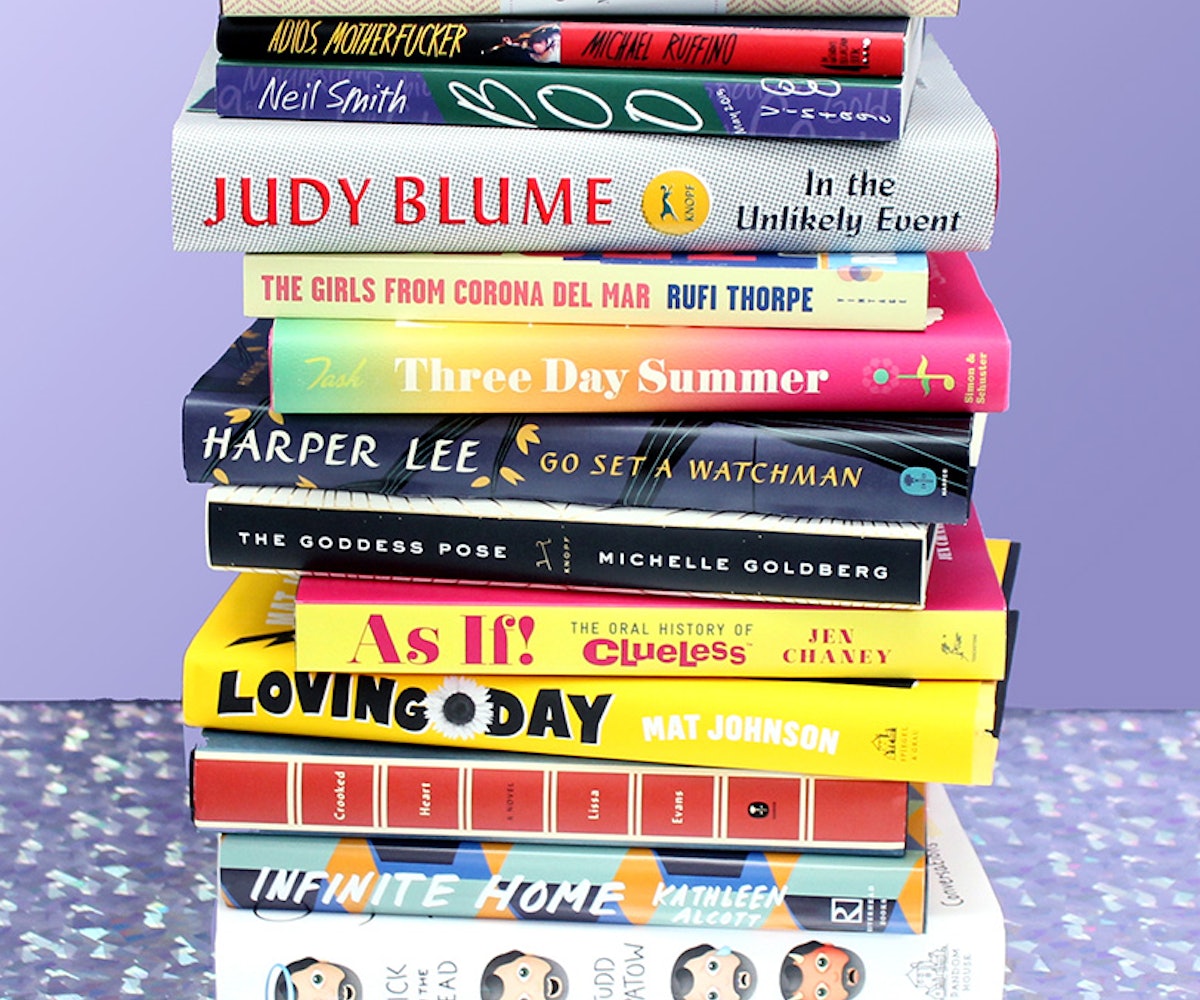 We can all appreciate the comfort of cuddling up with a book through long, dreary winter nights, but—just like everything else—summer offers a better version of that (cue the calming rustle of leaves in the wind).

Be it sand-speckled beach hangs by the ocean, spending time at the park on a lazy Sunday, or escaping to your room for an hour of sanity and personal space during an overwhelming family vacation, your summer book is there for you. Click through to check out the new and upcoming releases that we're obsessed with—we’ve got you covered from right now till August.

Life can be pretty weird at 13, and it turns out the afterlife gets even weirder: When Oliver “Boo” Dalrymple, a gangly, eighth grade bookworm, dies of a hole in his heart just before first period one day, he finds himself in Town, a Burton-esque resting place reserved exclusively for those who die at thirteen. Soon after Boo's arrival, Johnny, a former classmate, appears in Town and brings with him some grim news about the circumstances surrounding their premature passing. Together, the boys form an unlikely alliance to embark on a mission to find more answers. A breakout debut from Smith, Boo is a quirky page-turner that takes readers on a poignant, and at times dark, journey. If you liked early 2000s indie Wristcutters, you're going to love this. JUSTIN REIS

In Three Day Summer, millennial author Sarvenaz Tash takes the well-known event of Woodstock and transforms it into an intimate summer love story. With music like Jimi Hendrix, psychedelic drugs, and the Vietnam War serving as the backdrop, this fun read tackles the confusion of stepping into adulthood—and makes you feel like a time traveller. SOPHIA PAPPAS

Mat Johnson's latest novel manages to seamlessly intertwine the biracial struggle with romance, comedy, and a ghost story all in one. Warren Duffy, a recent divorcee, returns to Philadelphia to finish his late father's labor of love; the Sisyphean renovation of an old mansion in a rough part of town. Broke, alone, and thinking things couldn't possibly get worse, Duffy learns that he has a 16-year-old daughter from a long-forgotten teenage rendezvous. Duffy must grapple with newfound fatherhood, an identity crisis, and the strange apparitions that keep showing up on his front lawn. Dotted with moments of Junot Diaz-like extreme-nerdism, Loving Day is unmistakably honest and American. KATHERINE MARTINEZ

Anyone who hears the name Judy Blume and immediately thinks of the adventures of Fudge, Margaret, or one of Blume’s other timeless characters will be sad to hear that In the Unlikely Event may be her last work of fiction. The first book Blume has published for adults in the past two decades (and one of the most anticipated novels of this summer), it tells the story of a mysterious succession of 1950s airplane crashes that leave Blume’s hometown of Elizabeth, NJ in tatters. Thirty-five years later, Miri Ammerman returns home to Elizabeth only to relive the tragedy and hardship she faced during the crashes when she was fifteen and discovering love for the first time. Blume writes from experience as she takes the readers back to suburban life in the '50s, complete with Communist rumors, young love, and the common thread between friends and family—a disaster that changed their lives. CAITLIN GREENHO

Yoga inspires people in endless ways, and for Michelle Goldberg, the inspiration came in the form of a mission to unravel the intriguing life story of Indra Devi, the woman who brought yoga to the West. Goldberg’s account of Devi takes the reader through three chronicled, influential centuries of the yogi, actress, and fearless voyager's life which will leave you with a better understanding of how westernized Yoga differs from its roots—plus a deep respect for the iconic Devi’s ruthless dedication, and a major dose of inspiration to get you on the way to your next blissed-out savasana. CAHLEIGH SEREDA

Remember that girl from high school who just had everything? She was smart, nice, and beautiful, and, as far as you could tell, her family actually seemed to love each other. That girl is Lori Anne, and her cynical best friend, Mia, can’t seem to wrap her head around her enigmatically pure existence. Lori Anne would never think to make the juvenile mistakes Mia ends up getting entangled in. However, later in life, when Lori Anne is faced with tragedy after tragedy, she becomes tied to a past that Mia was able to leave behind. As the valley girls attempt to maintain their decaying friendship, Mia is forced to wonder if they ever really were friends. Thorpe’s debut novel is a practice in painful female friendships, and proof that growing pains do not just stop at adolescence. SUSANNA HELLER

Mia Alvar’s In the Country consists of nine stories, all told from the perspectives of men and women in the Filipino diaspora. Emigration and escape from a place, a secret, or reality itself is a common theme. In "Legends of the White Lady," a model past her prime ventures to the Philippines in an effort to relive the moments she spent there with her closest friend, who had passed away. During the trip, she encounters the same haunting tale over and over, to the point that it starts giving her perspective on her own life. In "A Contract Overseas," a young man finds a job on the Saudi Pipeline and finds himself in a forbidden love affair. Raveling around the world, what Alvar’s stories have in common is the boldness and sincerity of heart that lie in the center of all of them. SIMONE ARCHER

Although Long Island may not be geographically distant from New York City, socially speaking, it may as well be light years away. So what's a comedy-obsessed kid stuck in suburbia to do? Well, for Judd Apatow, he knew that he had to create his own opportunities. He got a job as a dishwasher at a local comedy club just to hear traveling performers' stand-up acts—and, perhaps most importantly, he took on a "DJ" job at his Syosset High School radio station. It was there where he set up interviews with his favorite comedians like Jerry Seinfeld and Rodney Dangerfield, never telling their agents that he was only 15 years old. Most of these conversations, centered around how to become a successful comedian (how to write jokes, how to book gigs), were never aired. Now, though, Apatow is compiling all of his best transcribed conversations (Amy Schumer, Roseanne Barr, Louis C.K., Chris Rock, and more) in Sick in the Head. If you're an aspiring comedian, consider it a guide. If you're a comedy nerd, consider it your ultimate dream. And if you're just a fan, consider it a character study of your favorite television and filmmakers. YASMEEN GHARNIT

Fact: Few films were as groundbreaking and influential as Clueless. If the popularity of plaid skirts in the ‘90s and the video for a particularly catchy rap song haven’t convinced you of this, then Jen Chaney’s As If!: An Oral History of Clueless surely will. Chaney arranges quotes from the cast and crew to document the creation of the low-budget film (with equally low expectations) that turned out to be the voice of a generation, and the best adaptation of a Jane Austen novel–well, ever. The book itself feels like sitting front-row at a Clueless reunion, giving an insider’s account of everything from the production details of Dionne’s freak out on the freeway to the etymology of “surfing the crimson wave.” Set to hit shelves 20 years after the movie premiered, As If! is the perfect celebration of Clueless’s anniversary, and the one party you won’t have to R.S.V.P. for. KERYCE CHELSI HENRY

Penned by a Brooklynite by way of Northern California, Infinite Home tells the story of an eclectic group of personalities, and the separate-yet-collective lives that they lead (as one does in New York), all brought together by fading matriarch Edith, the aging landlady of their Brooklyn townhouse. When Owen, Edith’s estranged son, shakes the tender home the tenants have built, the residents—a comic, a disabled man and his sister, an agoraphobe, and an artist—are forced to explore the limits of love, failure, togetherness, and community while testing the bonds of their shared experiences. Alcott’s sophomore effort does wonders in building a fragile web of familiarity, and compels the reader to become an extended part of it. JUSTIN REIS

Harper Lee's only novel—To Kill a Mockingbird—may be one of the most-read books of all time in America. This summer, as an array of new fiction that takes place in the ‘50s (Ivan Doig’s Last Bus to Wisdom) and/or focus on race (Mat Johnson’s Loving Day) come out, Lee will also release Go Set a Watchman, the first manuscript she brought to the publishers that later released To Kill a Mockingbird. Originally written in the mid-1950s, the novel is a sequel to Mockingbird, showcasing a dissection of the lives of Maycombers, twenty years later. Advanced copies are not available, however, we look forward to devouring the new Lee title as much as the next, well, everyone. BUSRA ERKARA

Crooked Heart follows ten-year-old Noel Bostock, a bright, unusual child who finds an unlikely ally in his con artist foster mother, Vera Sedge, during the London Blitz. Submerged in debt, Vera comes up with a foolproof plan that takes them pilfering the unassuming residents of London, who believe Noel and Vera are simply an ill-fated widow and a crippled orphan. Amidst their crooked ways and tongue-in-cheek Victorian undertones, there arises a heartwarming tale about a lonely young boy and a cunning middle-aged woman who find solace in each other. JESSICA KARL

Before Michael Ruffino was the composer for Anthony Bourdain’s riffy travel show, Parts Unknown, and before he contributed no-frills writing to publications like Playboy and Maxim, he was the bassist for ‘90s-era hard rock firebrands, The Unband. In 2004, Ruffino published Gentlemanly Repose: Confessions Of A Debauched Rock 'n' Roller, a no-holds barred account about life on the road, and now he’s updated his own work with Adios, Motherfucker: A Gentleman’s Progress Through Rock and Roll. But unlike most cliched sex-drugs-and-rock-n-roll accounts, Ruffino takes his readers on a gonzo, did-this-really-happen journey through the underbelly of the rockstar life. Don’t expect tales of drug-fueled hotel parties on the Sunset Strip—instead of California girls, his groupies were mute Christians—because the world of The Unband was strange and surreal, and utterly fascinating. BEN BARNA

NEXT UP
Life
Rachael Finley Never Got A Guide To Life, So She Wrote Her Own
Life
Read An Exclusive Excerpt From I’ve Had To Think Up A Way To Survive: On Trauma, Persistence, and Dolly Parton
Life
October 2022's Must-Read Book Releases
Life
Gabi Abrão's Notes On Shapeshifting Will Soothe Your Existential Woes