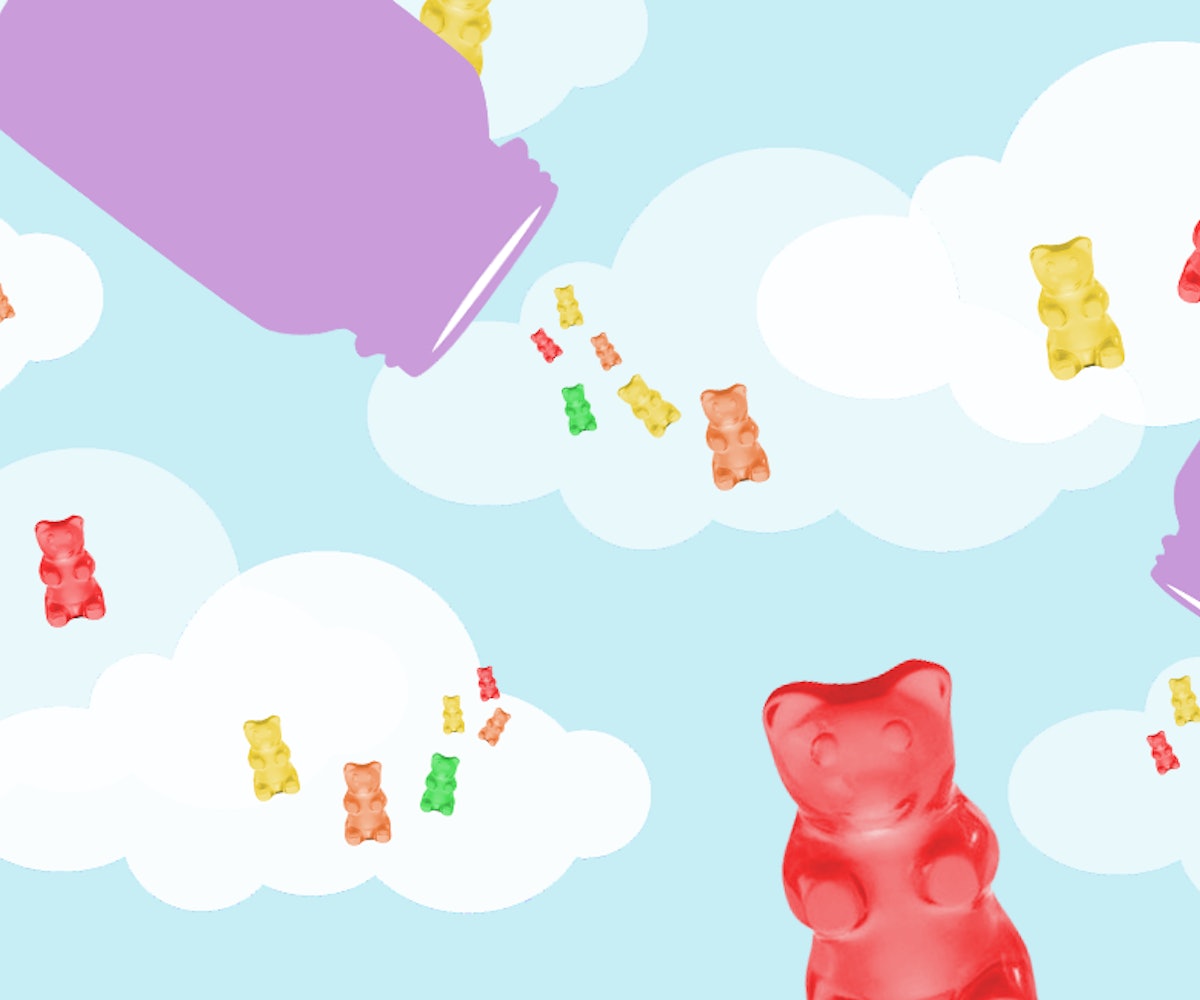 If you’ve scrolled through your social feeds lately, you don’t need me to tell you just how much of a moment anything and everything CBD is having. From bar soaps and body washes to healing balms and suppositories, the cannabis-derived ingredient is trending hard. Whether it’s because CBD has legit soothing properties or because we're all just really into weed—well, who's to say? The answer might just be that both reasons apply. To find out more about CBD, and specifically about how it can help get rid of that awful end-of-weekend malaise, we talked to the founders of Sunday Scaries, a new CBD gummy that's now a staple in my routine.

First Things First, What Is CBD?

Okay, before going into all things Sunday Scaries, let’s talk CBD. The tri-lettered abbreviation stands for cannabidiol. Many researchers have linked CBD to some seriously therapeutic benefits in medicine, hence the notable popularity in recent months. Until recently, THC was the most well-known compound in cannabis—it’s the component of the plant that leads to a mind- and body-altering high depending on the strand you introduce into your system. Unlike THC, CBD isn’t psychoactive, so if you’re worried about walking into work high as a kite, no worries, because adding CBD to your routine won’t result in that. Instead, it’s proven to deliver the body with ultra-soothing feelings of overall peace and calm. And, it’s those very feelings that have led to CBD becoming a must-try for anyone looking to soothe aches and pains—whether physical or mental, covering everything from period cramps to anxiety—without introducing chemically derived pharmaceuticals into the system. Cool? Cool. Now let’s move on.

We all have them. The weekend comes to an end and, despite how much we may love our job, the idea of going back to work is less than thrilling. It’s that idea of negative anticipation, stress, and dread that led Mike Sill and Beau Schmitt, two guys from legalized states of California and Washington, to create Sunday Scaries, a brand of CBD gummies that aim to deal with daily anxieties. As co-owners of a bar called The Brew Project in San Diego that focuses on an elevated bar experience, the duo knows a thing or two about stress. This was especially true when they were deciding to open another brick-and-mortar business in the hospitality industry, the stress of which led them both to consistently take CBD in different forms in order to deal with the daily anxieties of running one business while starting a new one. And so, in an attempt to take their Sundays back, not to mention to create a chill weekend feeling any day of the week, they started to dive deep into the cannabis industry to develop a new product.

“CBD is a miracle compound, it does everything,” Sill says. “I personally take it as a workout recovery, for sleep aid, for blemish control, skin care, as an anti-inflammatory, and, most notably, for anxiety. CBD is a natural compound derived from hemp and marijuana plants.” In other words, it just made sense. And so, Sunday Scaries was born.

Since the launch, there’s been a common misconception that gummies equate to edibles, causing some people to keep their distance. “One of the biggest challenges with educating the consumer is letting them know that it WILL NOT get you high,” Sill elaborates. “Many people associate all cannabinoids with being like THC and often overlook all the other attributes.” It’s that idea that also leads people to sometimes think that CBD gummies are only for "potheads" who want a less intense way to enjoy their favorite green. However, that’s not the case. “The Sunday Scaries customers are the socialites, party-goers, college students, and young professionals who want a natural and healthy alternative for anxiety relief,” Sill says. “They want to have an edge over the daily anxieties that intrude their lives, so they can focus on what they are passionate about and being happy.”

Now that you have a better idea of the gummies, perhaps you’re more willing to give them a try. I know that’s how it was for me—though, if we’re being honest (and I always am), I was onboard from the get-go. Nevertheless, it’s worth noting that, while there are many CBD products on the market these days, Sunday Scaries are specifically formulated for anxiety, making them an absolute dream for me, and the other 40 million people in the U.S. living with anxiety. “We incorporate vitamins B-12 and D-3 as mood boosters and to increase the bio-availability of the 10mg of CBD per gummy,” Sill says. Where B-12 is the most promising of all the B vitamins in terms of anxiety relief thanks to its major influence on neuron function, D-3 can affect the proteins in the brain, influencing mood, memory, motor control, and even social behavior. So when these two power-packed vitamins team up with CBD, you can only imagine the result: good vibes only.

When asked why they like to consume their own product, the answer was simple: to not deal with the daily bullshit of anxiety. “Life is hard enough, and I’d rather not deal with obsessing over hypothetical situations,” Sill says. “I sometimes find myself manifesting worries that don't actually exist, and CBD not only helps eliminate these from starting but also helps me focus on what really matters and not paying attention to them.” And, with that, I twisted open my own bottle of Sunday Scaries, popped a red gummy bear, and eagerly awaited what I hoped to be the be-all and end-all to consuming chemical solutions for my anxiety.

Okay, so, a couple things. First, I can attest that, no, Sunday Scaries will not get you high, so, yes, you can take them without fear of being up in the clouds while sitting behind your desk. Second, since taking Sunday Scaries, I haven’t reached for my Xanax once. As someone with a generalized anxiety disorder, with the bi-yearly panic attack thrown in for good measure (so fun, right?), that’s a pretty big deal. Now, to be real with you, my anxiety has seriously dwindled over the past year due to a pretty big change in my life, however there are still those underlying moments where I feel drowned out by Impostor Syndrome—the psychological pattern in which people doubt their accomplishments and feel like a fraud—or where I’m totally convinced someone hates me for no good reason at all, that I look ridiculous, that I’m not where I should be in my career, or something so very fun of that nature. When those moments have gotten the better of me, Sunday Scaries have been there to restore the calmed state of mind that I so badly crave on the reg. It’s worth noting, however, that I haven’t had any serious panic attacks—of which I’ve only had a handful in my entire lift, all within the past three years—since getting my Sunday Scaries and I imagine that, if I were to ever reach that point, I would still reach for my prescribed rescue med. What’s pretty cool though is that, with continued consumption, I’ve felt less anxious overall, so it’s likely that taking Sunday Scaries daily can actually reduce my chance of ever reaching that sheer panic state. So, I think we can all agree that that’s pretty rad. Plus, who doesn’t love gummy bears?

You can get yours for just $39 a bottle, with subscription options available for even better deals, here.