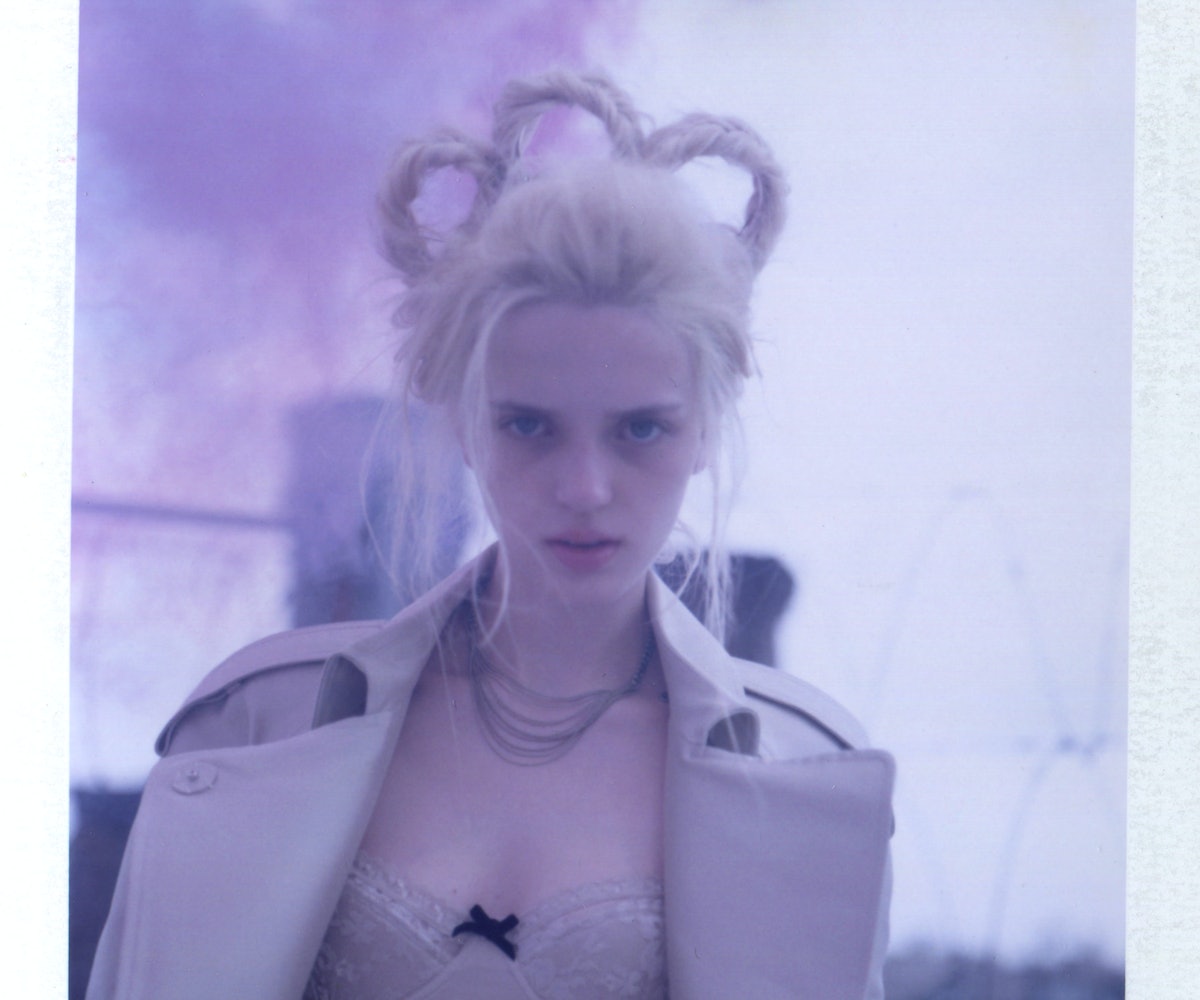 Living in New York City, you see a lot of incredible art every day--so much so that you become sort of desensitized or jaded about it. Sometimes I go to the MoMA just for lunch, not even to see the Picassos or Duchamps housed inside. (Sorry, art history professors! But really, the sandwiches are quite good.)

When I was introduced to the art of Myla Dalbesio, Ira Chernova, and Susannah Liguori, however, my eyes perked up. Each of these artists have a uniquely emotional and interesting perspective that makes their photos, illustrations, collages, and performances worth taking the time to see and study. Oh, and they also happen to be models represented by some of the most famous agencies in the world. No biggie.

Myla Dalbesio, represented by JAG Models, is the former Teen Miss Wisconsin who traded a pageant life for the life of an artist in New York. She's performed in her knickers, traveled with Ryan McGinley, worked with major artists like Jonah Freeman and Justin Lowe, and is basically a mobile ray of sunlight. (I know this because she also happens to be my friend/life inspiration.) Ira Chernova hails from Russia and works primarily as a photographer. Her haunting Poloroids of Teresa Oman and other model friends are prime wall collage material, but so are images of the tattooed Chernova herself, represented by Re:Quest models. Then there's Susannah Liguori, the model whose first shoot was with Hedi Slimane, who is currently studying art in New York while being represented by IMG. Her illustrations can be spied on her Tumblr, while her Instagram served as the home for her witty snaps of items on New York sidewalks.

We asked each model artist to tell us about themselves in their own words, and of course you can spy their creations in the gallery below.

I got started as an artist... as a kid! I can't remember a time in my life when I wasn't making things.

If I had to explain to a stranger about my work, I'd say... collage, video, performance, installation, drawings, photos, sculpture and text focusing on transcendent ecstasy, femininity, interaction between multiple planes of reality, rituals, excess, the spirituality of sexuality and the power and mysticism of the natural world.

Three things that have inspired me this week are: listening to Bauhaus while walking my dog through the park, sexting, and watching a beautiful girlfriend of mine smoke a cigarette at a party

My ultimate muse is: Strippers

The weirdest thing that's ever happened to me on the job was... probably the time that Stevie Dance and Tung Walsh (and Steff Yotka!) made me run around New York City flashing people on the street for a shoot. Also, I broke my foot a couple summers ago helping Justin Lowe and Jonah Freeman in their studio while they were getting ready for a show. We were moving giant slabs of slat-walling to the gallery from the studio, and someone dropped one on my foot. It was crushed. I had to fly to London two days later for a shoot and spent the next month trying to squeeze my swollen foot into high heels and pretend to balance my weight for photos.

My favorite artist is: Strippers

The best art book is: Doppleganger: Images of the Human Being by by Robert Klanten, Sven Ehmann, and Floyd Schulze

If I had to explain my work to a stranger, I'd say... it's haunting, raw, emotional, and changing.

Three things that have inspired me this week are:

My ultimate muse is:

more of a state of mind. when whole team works as one.

The weirdest thing that's ever happened to me on the job was:

There are no weird things, just different and new, which is always refreshing.

My favorite artist is:

I tend to not claim anybody as my favorite; it puts borders on your vision.

The best art book is:

I would say books where you can get an overview of an exhibit are quite brilliant. I love Vrubel paintings; you can see his work at Tretyakov Gallery in my hometown of Moscow. I also like Vasnetzov.

I got started as an artist...

when my hands started working.

don't think I would try to explain my work to a stranger, I would just have to show them!

Three things that have inspired me this week are:

latex cat suits, the bottom of girls' purses, and puppies.

My ultimate muse is:

Miley Cyrus and my mom.

The weirdest thing that's ever happened to me on the job was...

having my sculpture teacher help me make a mold of my naked body. I was sixteen. No eye contact was made.

My favorite artist is:

The best art book is:

NEXT UP
Culture
For The Girls Of Forever Magazine, What's Forever Is Friendship
Culture
Marie Faustin Loves To Waste Men’s Time
Culture
Puma Releases Art Book Who’s Who: New York Local Edition
It Girl
Madison Bailey Is Embracing The "Elegance" of Being in Her Mid-20s
Style + Culture, delivered straight to your inbox.