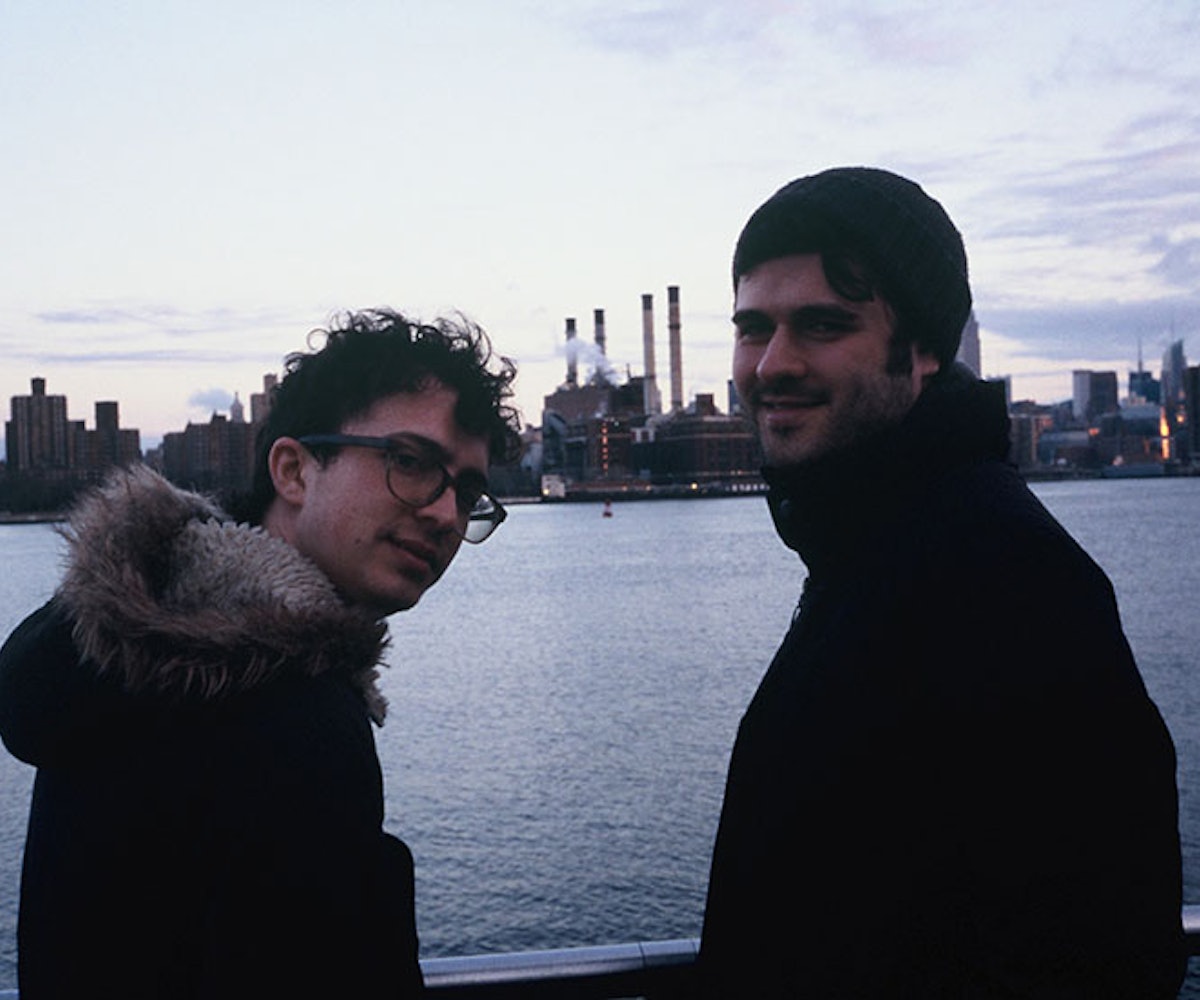 Grab your headphones. Press play on the Teen Commandments playlist below. And then close your eyes. Go ahead, do it. I'll give you a sec.

OK, ready to talk now? Good. Because as you probably noticed from the trance-inducing tunes below, Teen Commandments' music is awesome. Their synth-laden tunes will transport you to another, more fun world full of late nights and dance parties--more like an '80s-meets-2014 dream world more rainbow and groovy than anything that could exist IRL.

After finding the Brookyln-based four piece on Spotify (pro tip: Future Islands radio is full of gems), I found myself playing their 2013 track "Dancer" every morning for a week straight while I got dressed and walked to the subway. Then I caught the band playing at Mercury lounge an cemented my fandom.

If you're as crazy for their joyous pop as I am, read on for a Q&A about thier musicial origins, inspirations, and what the Teen Commandments would be.

Can you talk a little bit about your origin as a band and what inspired you all to collaborate together to make music?

Nick: Brett and I met on Craigslist like four years ago. I joined a band that Brett was playing with. It was based out of Austin, called the Frontier Brothers, and I was playing bass with them. After about a year of doing that Brett had some songs of his own and I had some songs of my own, and when we both left that band we started writing together. We played for a duo for a little while. We won this Brooklyn Brewery songwriting contest a couple of summers ago and played our first shows in Europe. Then after that we came back to New York and expanded the duo into a quartet.

Brett: I think the real conceptual origin of Teen Commandments is that Nick and I wanted to start making music that feels like you’re in sort of a movie, some sort of world that we’re imagining. We had never heard anything else like what we wanted to make, so we felt like it was sort of our obligation to start making the music ourselves.

That’s really weird that you said that. I feel like every time I listen to your music it sounds like the soundtrack to a really good movie that I want to see. I can imagine it.  It definitely makes walking from my apartment to the subway feel very important.

Brett: And what Nick and I are very conscious about throughout the composition process is creating a vocabulary and a grammar of sounds and lyrics that we use throughout the song so that the listener is really in a world.

Nick: You’re hearing these references come up again and again, whether it’s a musical motif or it’s something that we’re talking about--a girl, a party, or a place--so that you start to have a picture in your mind.

How did you guys land on your sound, which is very synth-y?

Nick: It was kind of funny because I don’t really necessarily listen to a lot of ‘80s music, or at least didn’t until after we started doing this. But when I was growing up my dad listened to a lot of the ’80s jams like Bruce Springsteen and Prince, and I would always hear those sounds. When we decided to start making this electronic, or synth-pop dance music…once we started kicking the sounds and defending what we both liked I started to remember all those sounds from when I was a little kid. It just evolved from there.

Brett: It’s extremely challenging because in New York City there are a million things that people could do before they want to go out to a dirty rock and roll club and see a show, so you really have to sort of fight against those tides and you do that by just creating a momentum of pure exuberance, so that when people come to the show they are overtaken with positive emotions and they want to do it again and again. It’s not easy. Anybody who says it is is confused.

If you guys could write a soundtrack to any movie, or even if it’s a movie that doesn’t exist yet what would you want it to be about?

Brett: I think it would be cool to do a soundtrack for like a David Lynch Apocalypse movie.

Nick: I think before we even landed on Teen Commandments as a name, weren’t we calling it Twin Peaks for like a week?

Nick: So, yeah that would be appropriate.

If you guys could collaborate with any musician who would you want it to be?

Nick: I think Brett and I would both agree that David Byrne would be our dream collaborator.

Brett: No question about it.

How did you guys pick the name Teen Commandments?

Nick: I think it was in Brett’s brain from a long time ago.

Brett: My last name is Moses, so people always made Ten Commandments jokes when I was growing up, and I just thought Teen Commandments was really funny. And then came the idea of writing music that’s about just having fun. What would the teen commandments be? They would be the complete opposite of the Ten Commandments, like, "Thou shall party into the after hours of thy heart." That sort of thing. It’s just sort of tongue-in-cheek. There’s no great tale.

In terms of getting news and your shows out there, I’m looking at your Facebook page now, and you have cool handdrawn stuff and bright posters. What works the best?

Brett: We’re still experimenting with aesthetic kind of stuff, but I think we’re really in favor of the handdrawn kind of thing right now. It’ll look like a letter or something that’s from a different time period, or another world.

Nick: We want to be the exact opposite of anything that seems corporate or marketing material because otherwise people aren’t going to click on your e-mail or look at your thing. So we try to keep it really whimsical and human. Hopefully it’ll always feel human and always feel like we have a relationship with the people that listen to our music. That’s very important to us.

Do you feel like as a band that uses a lot of synth in the current vibes of the music industry, it’s especially hard to differentiate youself from the crowd? Because every pop song has a bunch of synths in it nowadays.

Nick: The way we try to do that to be a little different from most people is blending the synthetic sounds that you would either get from an analog synthesizer or sequence in the computer with organic elements of real drums, real guitar, and real bass. It’s all about trying to find some kind of balance between the synthetic stuff and the real stuff that we actually play.

Brett: It’s a scary situation when you listen to a song on the radio and you recognize the patch from Pro Tools or Ableton Live that there using.