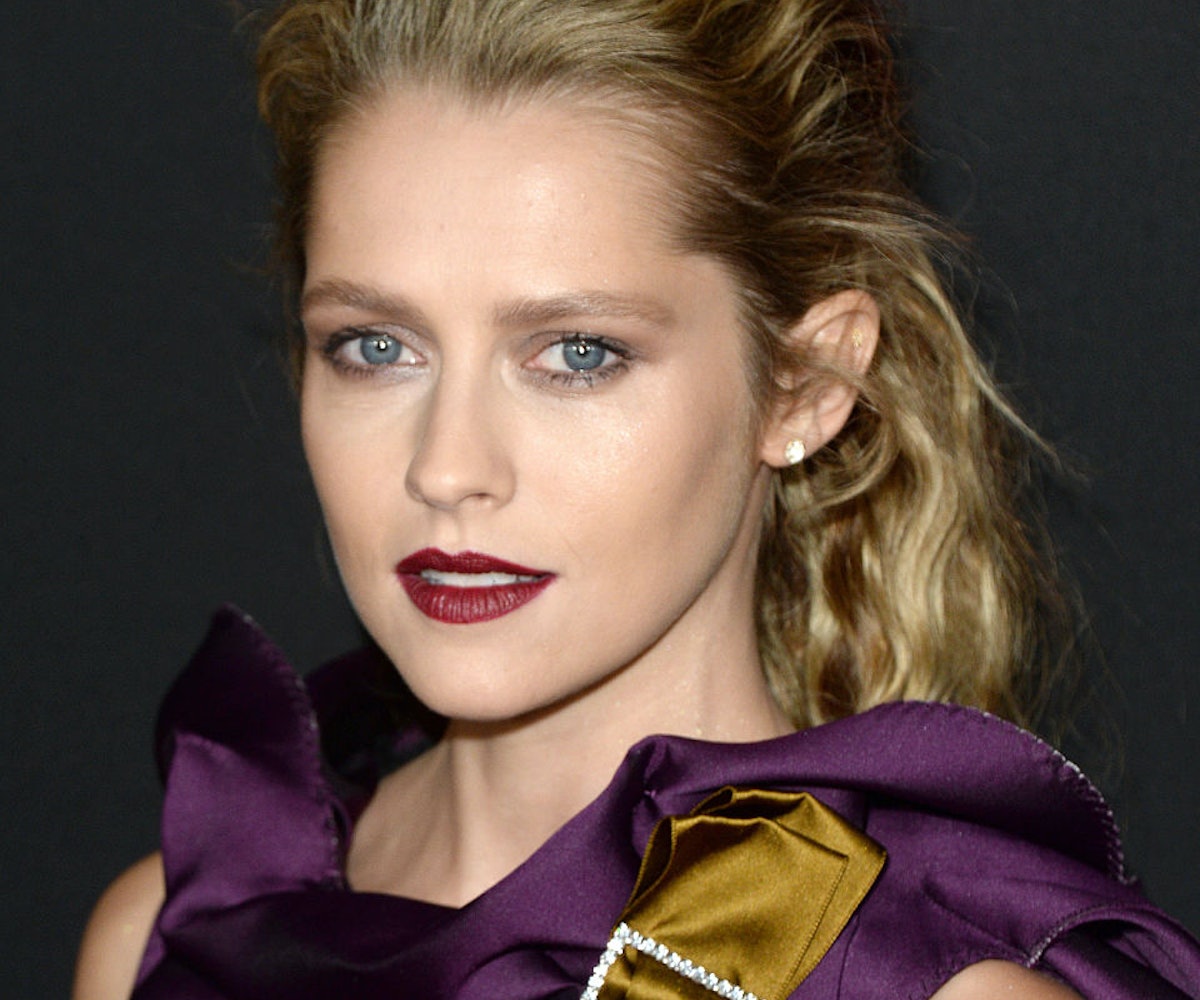 Every actor wants the chance to work with Terrence Malick, and Teresa Palmer was no exception. So when the Australian-born starlet got a call from the elusive and legendary director, whose past credits include The Thin Red Line and The Tree of Life, asking her to partake in his experimental drama, Knight of Cups, she jumped at the chance. In true Malick fashion, however, zero details were given about the role, and Palmer was cast at 10pm on the evening before the shoot began. Arriving on set, the eager actress learned that she would be portraying a stripper. Having none of the stripper-centric skills in her acting wheelhouse, she quickly enlisted the help of her real-life exotic dancer scene mates to give her an impromptu tutorial on how to work the pole. Before she knew it, Palmer was off on an improvisational journey to forever impact the life of Christian Bale’s character, Rick—a set experience she describes as being on a playground.

Knight of Cups is just one of eight films that Palmer is busy promoting this year. The 30-year-old beauty has been on a cinematic roll, appearing in everything from last year’s Point Break remake to joining an all-star cast in last weekend's gritty crime thriller, Triple 9. And though she’s busy running a blog, Your Zen Life, with her actress friend Phoebe Tonkin, parenting an energetic two-year-old, and attempting to grow her family, the motivated star has no plans to slow down. Each year, Palmer puts together a manifest board of what she wants to achieve in both her personal and professional life (working with Malick was on it!), and two months into the year, she’s already smashing through her goals.

We caught up with Palmer to discuss what she learned from working with Malick, how she was apparently so good at stripping on-screen that it took Bale two months post-filming to figure out she was an actress, and how motherhood has changed every aspect of her life.

You had eight movies released this year. When do you sleep?

I don’t really. I have like little periods of three-hour sleeps, and then get woken up for the usage of my breasts, since my son’s breastfeeding still. But yeah, I mean, the last two years of my life, it’s been really hectic. Last year, I shot five films. The year before that, I shot four, and so they’re all coming out now, which is exciting, and I’m promoting them all and it’s wonderful. But I also am trying to cultivate some self-care and stay close to my family. That’s why I bring my son with me to work.

Does he do the press tours with you and all the movie promo stuff?

I’ve actually never spent a night away from him yet since he’s been born. He was born two years ago, last week. We just travel everywhere together.

I know! I am doing like baby-led weaning, so you know, I don’t think you’ll see me with a child of five breastfeeding. There will be some stop to it at some point. But, yeah, for right now, he really feels like he still needs his momma’s milk.

Is it true that when you took this role, you had no idea what you were in store for until you got to set?

Yeah, I had no idea. I found out at 10pm the night before that I was gonna be in his film, Terrence’s movie. I begged to know anything. I asked my agent what’s my character’s name, what does she do, who is she? And he said, “All I know is that her name is Karen and she’s a stripper, and what she says to Christian Bale changes the course of his life forever.” And then they said, “There’s no script, so you’re going to have to come up with what it is she says.” And, obviously, it was a lot of self-inflicted pressure, but then once I got on set, and I recognized the dynamic between everyone and how it is such a self-discovery and we’re all on this journey of figuring it out as it comes, that was very liberating. Sometimes they would work, sometimes they wouldn’t, but that’s okay and that’s all a part of it. It’s a playground.

What did you think about going from not knowing whom you were playing to boom, you’re a stripper?

I was very much thrown in the deep end. And then when I arrived on set, I had a moment of seeing other women who were what I thought actresses pretending to be strippers, but they were real-life strippers. So I was like, “Help me! You need to tell me, like, how do I move my body?” So they would take me over to the pole and they would show me what to do with the pole and how to move my body. I kept forgetting that I was playing a stripper. I would just be in the scene with Christian and then I’d hear one of them say, “Keep moving your body!” I’m like, “Oh my gosh! I have to keep moving my body. That’s what strippers do. They don’t just like sit and have a conversation. They’re moving; they’re very sexual beings and that’s very alluring.” I just kept on forgetting to move. So, yeah, apparently it works because Christian Bale thought I was a real stripper for the longest time.

So he just thought he was filming a scene with an actual stripper?

Yeah! He just thought I was a real stripper. He didn’t know that I was an actress. I also didn’t help the situation because I thought that he was testing me because he was staying in his American accent. So I was like, “Oh, he’s a method actor. He’s testing to see if I’m a method actor. I’m gonna be a method actor!” So I made up some elaborate backstory about being a stripper and how I have a daughter. I made up some fabricated story, and so that didn’t help the situation. He truly thought I was all these things that I said that I was.

At what point did he realize you weren’t a stripper?

Apparently when he was driving along Sunset Boulevard, he saw my poster for Warm Bodies when it was out. He was like, “Hang on a second. That’s that stripper!” So that was funny. And Terrence Malick doesn’t tell you who’s an actor and who’s not an actor. So, a lot of people in the film are non-actors; they’re just real-life people being themselves.

It was incredible. He was on my manifest board, actually, he was smack-bang in the middle of my manifest board for 2012, and I would walk past him every day and be like, “Oh! One day I’ll be able to work with him.” And then, sure enough, a couple months later, I’m on a film set with Terrence Malick. He just really embraces you as a performer, just your spirit and your essence, and who you are.

I just heard a crazy story about a filmmaker, I forget his name, and he has his actors actually having sex, and actually doing these things. So, I would draw the line there. I’m not actually going to be having sex on screen for my sex scenes. But he’s this really well-respected director, and he just thinks it’s more natural for them to really be having sex. I wouldn’t strip for just anybody, and I didn’t take my clothes off in this movie. Only if the role really asks for it, would I do it.

Are you having fun being a new mom? How has motherhood affected you?

It’s the best thing in all the land. It’s my favorite part of my life. It’s affected me in that the world just feels different to me now. Everything’s more vibrant. I have so many more feelings in every aspect. I feel such a greater fear because I’m now a mother. I’m fearful that something could happen to this child that I love so much. But then I feel so much empathy for everyone, and I feel greater love. So it’s like the world in every aspect is richer. I want so many children. I want to get pregnant again this year. I wanna just keep having babies!

This film portrays Hollywood as a land of excess and self-destruction. Does seeing that play out on screen make you hesitant to want to raise your child here?

I am hesitant to raise my child solely in Los Angeles, however, I will say that L.A. gets a really bad rap. The excess side to L.A. is very much here, just the overindulgence, the abundance, the focus on the physical is here. And it’s this machine-like nature in Hollywood. However, on the flip side, it’s the most beautifully creative environment, and I find that it’s a really conscious place to live; there’s such a movement toward mindfulness and meditation and self-discovery and exploration. And that’s what I’m really excited about. So I want my son to be around that aspect of it but we also just bought a house in Australia for that very reason. I need him to feel both cultures, and the differences between the two. We’re gonna start hoping back and forth.

You run a website called Zen Life. Give us some of your go-to tips for living a balanced and Zen lifestyle.

If you’re ever feeling any sort of anxiety or fear, anxiety and fear come from dwelling in a place of the future—thinking about this thing coming up or “I’m nervous about this flight.” That is living in the future. Any sadness or feeling low or depression—that is dwelling [on] past thoughts. So, it’s really interesting, because they’re the main scary emotions that people have: either sadness, fear, anxiety. And really it’s just not being present. It’s not being in the present moment. If you’re in the present moment and you’re feeling those things, that’s great, delve into that, that’s beautiful. But trying to figure out how you can be here in the moment is integral to a healthy balanced lifestyle.

What’s on your current manifest board

I have lots of pictures of mommas with pregna

nt bellies and their little two-

year-olds nearby. So, this year is very much

a year of growing my family. Then,

I actually have a lot of philanthropic stuff on the mind. I r

eally want to start moving further into my philanthropy, and so I have a lot of women I am inspired by, like Christy Turlington who I think really uses her profile to affect positive change in the world.

nardo DiCaprio does that

using his profile to raise awareness in that way. And

arion Cotillard. I love her career, and how she goes back to France, and she really represents. She works with her husband constantly

who is a filmmaker and actor, and I do that with my husband. So she’s a huge source of inspiration. Jessica Chastain is on there. Brie Larson is on there because

’s such a beautiful human being; she does great work.

I have the left side that is acting and work, and then it moves into philanthropy and Your Zen Life, an

d then all the baby momma stuff

Do you hang that in a place where you see it all the time?

Yeah. It’s in my bedroom. I think when you fixate on your manifest board, you’re trying to control the outcome. So I like to put it away where it’s not so obvious all the time, so I can forget about it and it sort of just goes into the background. But it’s there and it’s very alive. It’s a constant reminder of my goals and my wishes and my desires, so it’s also something to work towards too.