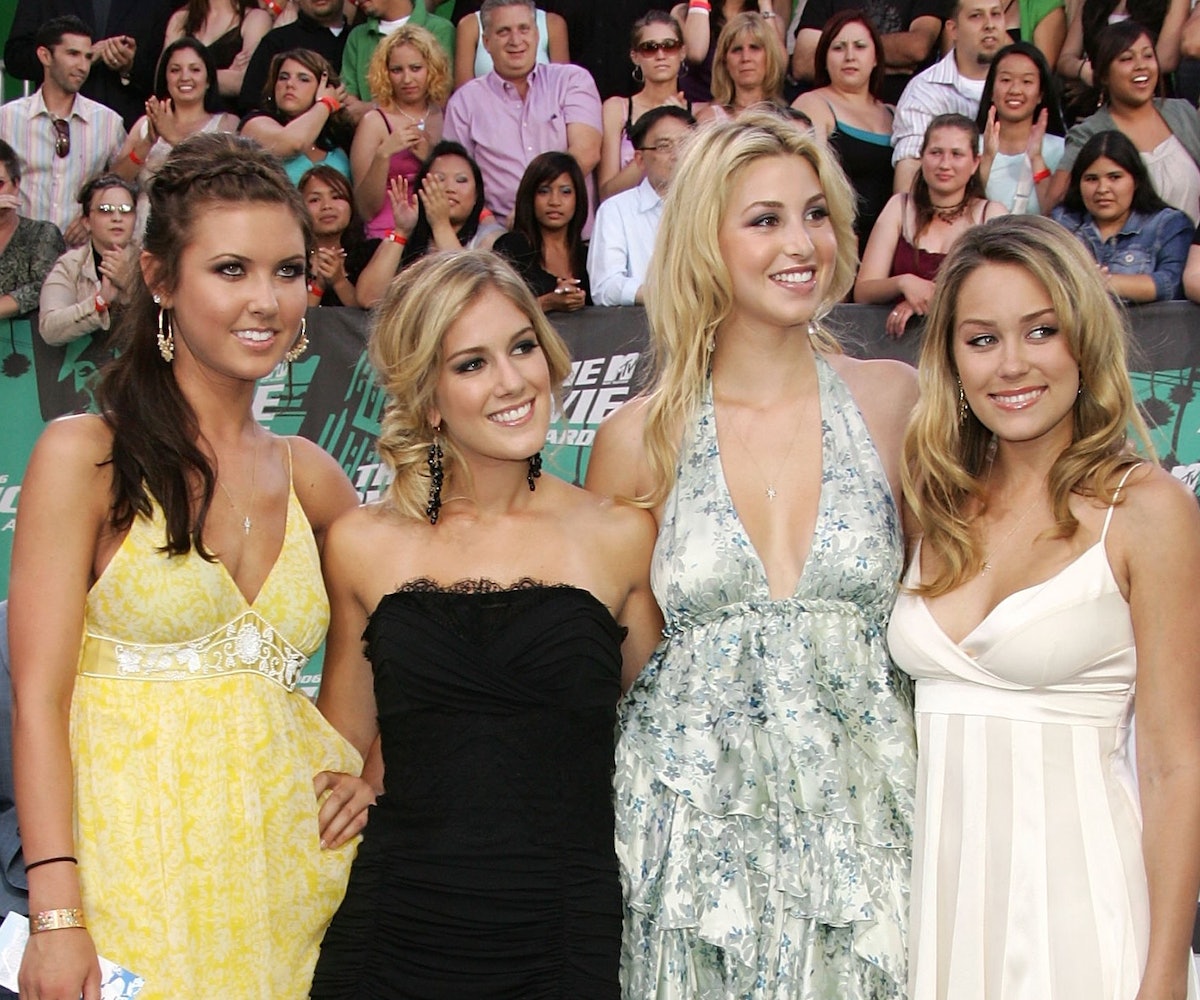 Eleven years ago today, the world of reality television was blessed with the MTV premiere of The Hills. A lot has happened since we first saw LC driving up to her condo in West Hollywood, but the content of the show stands the test of time. Admit it: Your pulse still quickens when you hear “Unwritten” by Natasha Bedingfield, and every time you meet a guy named Justin you resist the urge to say, “Justin Bobby?” Don't worry, though. You’re not alone.

While some are skeptical of the degree to which reality television is actually televising reality—even The Hills acknowledges that some aspects of the show were contrived; self-awareness is key—it doesn’t change the widespread influence the show had in the 2000s. Here, we look back on some of the show's most iconic moments in celebration of the headband-wearing, Le Deux-frequenting, Blackberry-messaging part of all of us.

The lesson here is obvious: When offered the opportunity to intern for Teen Vogue in Paris all summer or spend a few months at the beach with your boyfriend, always go to Paris! I think that if he'd really wanted, Lauren's boyfriend Jason could have scrounged up some money to buy a plane ticket and visit while she was there. She did get that cool nickname courtesy of Lisa Love, though. So there's that.

Regardless of whether Spencer was actually a sucky person IRL (we caught up with him recently, and it was pretty chill), the image of Lauren shouting this at Heidi is an iconic one that makes me temporarily fear ever asking my friends for their opinions on anything.

3) When Whitney Fell Down The Stairs On Good Morning America (Season 2, Episode 11)

This is one of those moments that can’t be unseen. One minute everything is going fine, and then next minute we see Whitney stumble down a flight of stairs in Hilary Swank’s very swanky (sorry) dress in front of a viewing audience of hundreds of thousands of people. All things considered, Whitney handled the fall with grace—even Amy Astley told her so.

4) When Lauren Allegedly Made A Sex Tape And Heidi Allegedly Told Everyone About It (Season 3, Episode 1)

An already tumultuous friendship is further dramatized at a nightclub when Lauren runs into Heidi after the latter had allegedly spread rumors about a sex tape of Lauren and her ex-boyfriend Jason. The only thing missing from the infamous “You know what you did” moment is Lauren throwing her drink in Heidi’s face.

It physically pains me to think about this for too long, so I’m just going to leave this GIF here:

6) When Lauren Informs Lo She Wasn’t Being Oversensitive (Season 3, Episode 5)

Can we bring this phrase back? Thank you, Lauren, for validating your friend’s feelings and also coming up with a great way to compliment a friend while dismissing the existence of a boy who’s not worth her time.

Oh LC, always putting your own spin on classic sayings. When Lauren tells Heidi that after their falling out all that is left to do is forgive and forget—which usually means move on—she clarifies that she wants to forgive Heidi and also wipe her existence from her memory. See what she did there?

8) When Justin Bobby Was So Great He Needed Two Names (Season 4, Episode 10)

Or not so great, depending on how you look at it. The noncommittal enigma that is Justin Bobby still leaves me with some unanswered questions to this day, although most of them revolve around his hair and what his profession is other than existing.

9) When Spencer Kept His Anger In His Crystals (Season 6, Episode 2)

Admittedly, the later seasons of the show are lacking in truly iconic moments, but Spencer and his crystals keep the show afloat. After not only his sister but also Heidi’s sister get under his skin, Spencer gets ~spiritual~ on us, and we see him breathing deeply while pressing a crystal to his temples. Not pictured below: His friend Charlie (who?) saying, “You’re crazy, you lost it.”

10) When The Producers Made Us Question Literally Everything (Season 6, Episode 13)

When Brody says goodbye to Kristin in the series finale, he is left standing in the street watching her drive away, and we see the Hollywood Hills in the distance. Only it’s not the Hollywood Hills, it’s just a backdrop and it is yanked out from behind Brody as lights, cameras, wires, and everything that is needed on the set of a television show are revealed, leaving the audience to wonder, Was any of it real???

NEXT UP
Fashion
13 Of The Buzziest, Can’t-Miss Moments From NYFW
Fashion
The Best Denim Moments On The Street At Paris Fashion Week
Beauty
An Ode To BLACKPINK’s Coolest Manicures
Entertainment
On ‘Cool It Down,’ A Spitfire Band Matures