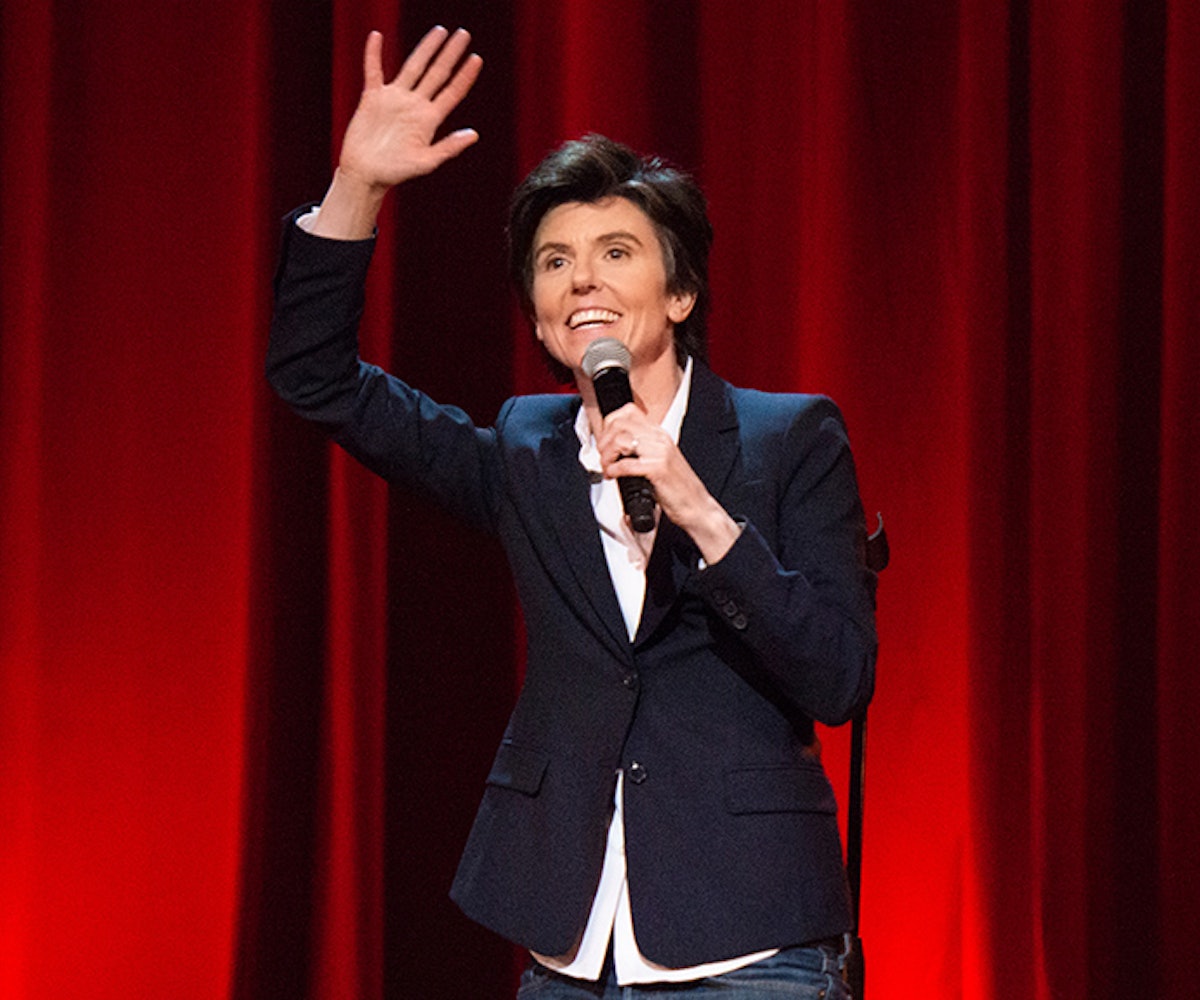 Tig Notaro’s new HBO comedy special, Tig Notaro: Boyish Girl Interrupted, proves that the comedian shines the brightest when her humor is the darkest—though the vast majority of her jokes here are silly and very PG. Between a situationally hilarious story about being an adult who is excited to see a man who looks like Santa ("OH MY GOD! DO YOU THINK HE'LL TALK TO US??") and another about accidentally doing standup with an ice-cream mustache, she throws in a quick joke about being “gay buried” next to her fiancée. There are only a few truly dark moments like this one throughout the special, but they stand out: And it’s this mixture of silliness and seriousness that makes Tig such a unique performer.

But there’s also this sense that Tig the performer and Tig The Person are two very different people. “I’m just a person,” she repeats, but the Tig we get onstage is serious, measured, soft-spoken, and nearly solemn in her delivery, with an endearing silliness that seems to only sneak out at certain moments. When she occasionally breaks out into a grin, it’s practically a relief.

Nowhere is this dichotomy more relevant than in the moment Tig takes her shirt off to reveal her double-mastectomy scars. This is an important statement for her individually and for breast cancer survivors at large: But it’s also comedy. After all, there is no topic that is more ripe for comedic discussion than our own mortality. The suggestion that Tig's boobs tried to kill her after a lifetime of being insulted by her is brutal, depressing, and funny. And there’s just something intrinsically silly about a half-naked standup comic. That the nudity shows how her illness changed her body, forcing us to visually confront what that actually looks like, is testament to her brilliance. She’s making light of something serious while also calling attention to it in a serious way. She’s challenging us to look at her post-cancer body while we laugh at her jokes. She’s not trying to put the audience at ease, but by being so comfortable with her body, she does.

Tig’s special is groundbreaking for women—especially for breast cancer survivors and queer people. After all, here’s this smart, attractive (honestly, I think she’s super hot but that’s besides the point), funny lesbian on the masculine spectrum who survived cancer and got an HBO special, and then showed her surgery scars without so much as flinching. She appears just as comfortable in her post-cancer body as she was before she had her breasts removed, showing that cancer may have interrupted her life, but it didn't silence her.