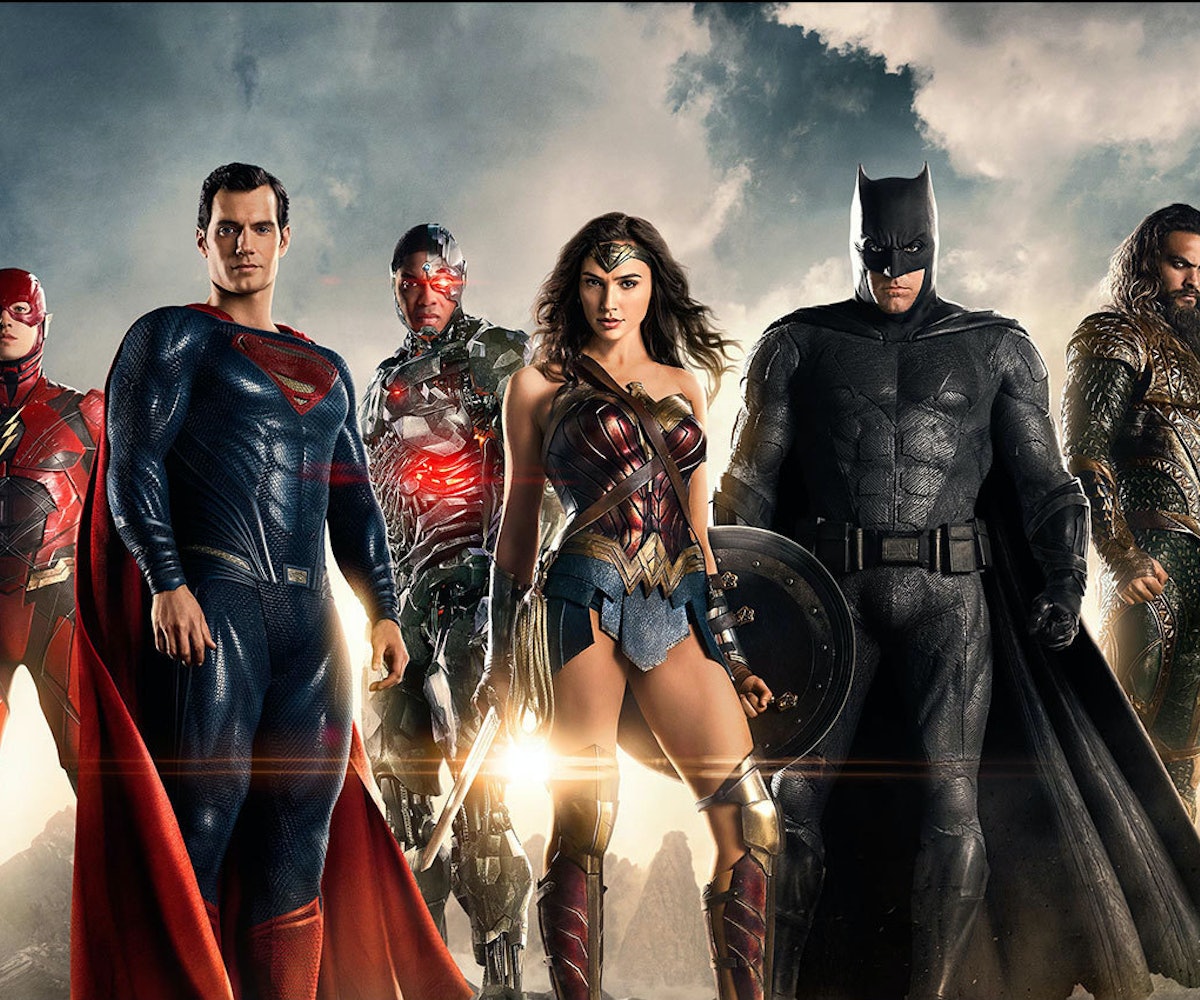 With The Avengers, Marvel Studios pulled off a remarkable feat of storytelling, world-building, and fan service, teaming up some of the world’s most iconic superheroes in one extravaganza. The Avengers marked the culmination of a series of standalone movies featuring heroes like Thor and Captain America that began with 2008’s Iron Man, and it set the standard for the so-called “cinematic universes” that every major studio is in the process of trying to recreate. But before Marvel proved that teaming up individual superheroes in one movie could be done, and be done well, Warner Bros. had the audacious idea of uniting the biggest heroes on the DC Comics roster—Batman, Superman, and Wonder Woman among them—in a single movie based on the Justice League comic books. That was back in 2007, one year before Iron Man and The Dark Knight changed the course of comic movies for the next decade.

Now, 10 years later, Justice League is finally storming theaters, albeit a very different version from the one first given the green light back in 2007. So why did it take 10 years for this movie to finally reach audiences? And what happened along the way? Below is a rough timeline of the events that finally brought Justice League to the big screen.

Christopher Nolan’s Batman Begins starring Christian Bale is released, rebooting the character after the disaster that was Batman and Robin and repositioning him in a more realistic and grittier world than the pop-art universes of recent superhero movies like Spider-Man and X-Men.

Warner Bros. releases Bryan Singer’s Superman Returns, which was simultaneously being billed as a reboot and a sequel to the Christopher Reeves-era Superman movies. The movie, which received a lukewarm reception, starred newcomer Brandon Routh in the title role.

Warner Bros. hires Kieran and Michele Mulroney to write a script for a movie called Justice League Mortal. The husband-and-wife writing duo had no major screenwriting credits to its name (the two have since contributed to blockbusters like Sherlock Holmes: Game of Shadows), but apparently, WB liked their initial draft.

George Miller is hired to direct the Justice League movie, which will not involve Bale or Routh and instead recast those characters, along with Wonder Woman, Aquaman, The Flash, and The Green Lantern. Miller, who created Mad Max (and went on to direct Mad Max: Fury Road) struck some as an odd choice, given that, at the time, his last two movies were the animated penguin yarn Happy Feet and its sequel. Suddenly, the studio found itself in a race to begin shooting before the looming Writer’s Strike, and casting for the movie was underway.

To beat the strike, Warner Bros. casts Justice League Mortal very quickly, opting for a mix of younger actors and newcomers to don some pretty iconic tights. A then-unknown Armie Hammer was cast to play Batman. D.J. Cotrona was cast as Superman. The O.C.’s Adam Brody was cast as The Flash. Megan Gale was cast to play Wonder Woman. Common was cast as Green Lantern. And finally, Jay Baruchel and Teresa Palmer were cast in villain roles.

This was a murky, difficult year for Justice League Mortal, filled with delays, dashed hopes, and false starts. Sets and costumes had been created. (The only one that was ever released to the public was Gale in her Wonder Woman costume, which you can see here.) But the script needed work, and WB had to wait until after the Writer’s Strike for that to happen. Once the Writer’s Strike ended in February 2008, production on the movie was pushed back. Eventually, the production offices were moved from Australia to Vancouver after the production was denied Australian filming tax revenue, a bad sign of things to come.

Around this time, reports began to circulate online that Justice League Mortal was “dead.” There was no official conversation from the studio or cast, with Warner Bros. focusing on releasing what would become the gold standard of superhero movies.

Brody all but confirms that Justice League Mortal is not happening anymore, and it, at least partly, has to do with WB’s other DC franchises: "I probably shouldn't be commenting on it, but who cares. I don't really know. I still feel like an outsider on that somehow. I know there was a tax credit thing and I know that the strike was a hindrance. Also, you've got Batman coming out and Singer wants to do another Superman. This is only speculation on my part, I have no inside knowledge of this, but, as a fan, I think there's controversy about going off and trying to [show a different Superman and Batman]... I think maybe it will still happen, but I truly don't know any more than you do."

Nolan’s The Dark Knight arrives in theaters like an atom bomb, detonating expectations of what a sequel and comic book movie can be. The movie went on to gross a staggering one billion dollars worldwide and was in the conversation of one of the year’s best films. Epic in scope, The Dark Knight balanced blockbuster theatrics with dramatic weight in a way no movie of this genre had before. This posed a problem for Warner Bros., who were still looking to begin production on Justice League Mortal. Suddenly, Nolan’s Batman was iconic, and the idea of another Batman in a separate cinematic universe risked confusing audiences. Bale made it clear that he felt the same way. "It’d be better if it doesn’t tread on the toes of what we’re doing," he said at the time. "It would be better if it comes out after Batman 3."

The effects of The Dark Knight’s success and the failure of Superman Returns are made clear by Warner Bros. Pictures Group President Jeff Robinov, who tells The Wall Street Journal that the studio will reboot Superman from scratch to match the darker tone set by Nolan’s Batman films. He also outlines a plan to release movies for individual DC characters, eventually building to a team-up movie featuring all of them, presumably Justice League. Miller’s Justice League Mortal is officially dead.

Warner Bros. hires Zack Snyder to direct its Superman reboot. Snyder is a director known for his macho, operatic, and, yes, dark, imagery. A visual virtuoso who gave the studio a massive surprise hit with 300, Snyder’s storytelling skills were questionable. His last two films, Sucker Punch and Watchmen, were uneven at best, incomprehensible at worst.

Marvel releases The Avengers to critical acclaim and record-breaking numbers, adding to Warner Bros.’ urgency to create its own superhero universe based on DC characters.

Man of Steel, Snyder’s Superman reboot, hits theaters. The movie features a brooding Superman that divides audiences, setting the stage for Justice League’s rocky development process. “It’s setting the tone for what the movies are going to be like going forward. In that, it’s definitely a first step,” Robinov told EW at the time. “[Nolan’s] Batman was deliberately and smartly positioned as a stand-alone. The world they lived in was very isolated without any knowledge of any other superheroes. What Zack and Chris have done with this film is allow you to really introduce other characters into the same world.”

Just a month after Man of Steel’s release, Snyder shocked audiences at San Diego Comic-Con when he announced that the movie’s sequel would feature none other than Batman, uniting the characters on the big screen for the first time and signaling that Justice League is imminent.

Ben Affleck is cast as the Caped Crusader in what will soon be known as Batman v. Superman.

Gal Gadot is cast as Wonder Woman, who is confirmed to appear in Batman v. Superman. This marks the first time Princess Diana of Themyscira will appear on the big screen after everyone from Angelina Jolie to Beyoncé had at one point been rumored to play the iconic character.

Snyder is chosen by Warner Bros. to direct Justice League before anyone has seen Batman v. Superman. The studio’s confidence in the director is questioned, given the mixed response to Man of Steel.

Snyder confirms that Justice League finally begins shooting on April 11. Filling out the main cast are Jason Momoa as Aquaman, Ezra Miller as The Flash, and Ray Fisher as Cyborg.

Batman v. Superman is released to huge box office numbers but is a critical debacle. The movie is derided for its joyless and dour tone, incomprehensible plot, and misrepresentation of its titular heroes. The only awesome thing that everyone can agree on: Wonder Woman. With Justice League only weeks away from production, both fans and studio execs hit the panic button.

Damage control. Warner Bros. invites a small group of journalists to the Justice League set in London, beginning a PR campaign meant to convince the public that this movie will be nothing like Batman v. Superman. Namely, it will have jokes. On June 21, multiple outlets publish their reports from the set with many reporters focusing on a scene between Miller and Affleck that’s heavy on the banter.

Snyder stuns Hollywood when he announces he is stepping away from Justice League to cope with the sudden death of his daughter. Joss Whedon, who directed the first two Avengers movies, steps in to rewrite and reshoot scenes.

With only months to go until the film’s release, stories of extensive, last-second, and very expensive reshoots are pervasive. There are reports that the movie is drastically changing in tone under Whedon’s stewardship. Henry Cavill, who is shooting the sixth Mission: Impossible movie simultaneously, is forced to keep the mustache he grew for that character while reshooting scenes as Superman, making it the first mustache in movie history to be removed in post-production.

With a week to go until its release, the first reactions to Justice League hit social media. Gizmodo’s Germain Lussier sums up the general feedback: “Narratively it's a mess, the stakes don't work & the villain isn't great. HOWEVER, the heroes ARE great, it's funny, & there's some surprisingly effective character work. I didn't love it, but there are enough good pieces to excite me for the future.”

Here’s to the future.