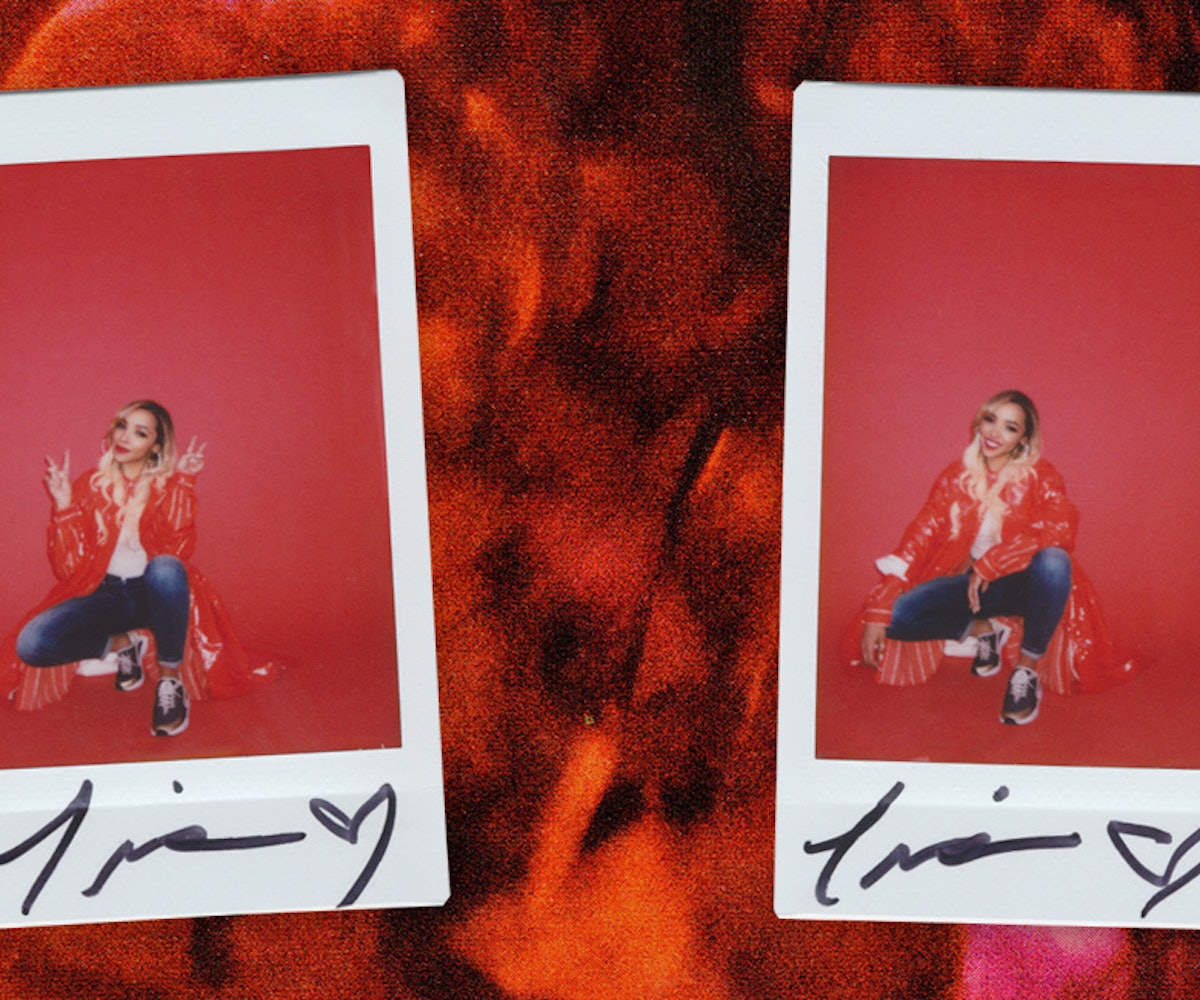 Tinashe is tired. By the time she's reached our office in downtown Manhattan, she's already completed a day's worth of back-to-back press interviews surrounding her long-awaited album, Joyride, and would very much like just to eat and relax.

"I'll go easy on you," I tell her, while she munches on a bag of potato chips. And as we got to talking, I realized that Tinashe's not only tired from rigorous traveling and interviews all day, but also from the past three years, in general, which have been a bumpy ride for the singer.

Fans of Tinashe, born Tinashe Jorgensen Kachingwe, know that the process of putting out her album, Joyride, has been anything but a joy. After a series of failed rollouts, the artist ended up releasing everything but the record, including a series of one-off singles and a mixtape, Nightride. The frustration was evident in her voice when I asked her to take me back to the time when she first announced the project. "When I initially announced the album, I had gotten back from the studio and made a big, new chunk of music, and I was just very excited about it and anxious to put out. I kind of jumped the gun in that sense in telling people about the project. It started off with a lot of excitement and giving people a date that was way too soon, and then when it didn't come out at that date, then there was, like, a down period where I felt pretty embarrassed—like, that I'd said that, and it didn't happen."

Though she spoke of that time with a sense of exasperation, she also noted that the entire ordeal ended up being beneficial to her growth as an artist and as a person. "I had a third change of mentality, and that was when I kind of got the studio house, the summer I got a house in the hills, and turned it into, like, a creative sanctuary. That was a real big turning point for me because that was when I just felt the most self-assured. I felt like, okay, I'm really going to home in on this project, I just had a great vibe all summer, with producers, writers, people coming through, throwing Taco Tuesdays. I created a lot of the best songs on the project in that era. I think I was just in a better state of mind, and I was creating it much more purposefully and more confident and everything."

And that's exactly what people are going to get when they hear Joyride—Tinashe at her most confident. Fans have already heard it in the Offset-assisted, party-ready anthem, "No Drama," when she sang, "Said I'm falling off but they won't JFK me/ Tried to be myself but they won't aka me." That same energy appears again, this time, by the grace in Tinashe's strut in the bright visual for "Me So Bad."

"That's how I feel now, confident—and it feels good. And it's the energy that I'm projecting into the future. I feel like we're so inundated with so much negativity when it comes to just the news and the media, and everything that we see all the time, that it is important for me to give people something that they can just turn on, sing along to, and feel good for that day, you know?"

By the time we've wrapped our conversation, Tinashe's energy is soaring. She joins me in our studio space, where we laugh, snap Polaroids, and record Instagram stories. Before I know it, she's gone, preparing to head back to her home in L.A. to do more work. It was inspiring to be next to this person who continues to stand tall, with her two feet planted firmly into the ground, despite it shaking around her. Most people who embark on a joyride are in it in order to feel the rush from the ride itself. And though Tinashe's Joyride was full of massive roadblocks and risky bumps, she's gained so much more than just the ephemeral thrill of that one trip. Her future is wide open.

What did the album's setbacks teach you as a person and artist?

It taught me that setbacks are very much just that—setbacks. You can overcome them. It also taught me that your expectations probably won't happen, and to never set too crazy expectations for yourself and to let life be, and the universe will work itself out. I also honed in on my skills during that time as well. Like, I really took upon myself to just improve in all aspects including my visuals. I wanted everyone on my team to be extremely talented, from the people working my social media to my graphic designers to my video directors—like, everything was much more curated and more focused. I feel like I also just improved as a singer, as a dancer, as a writer. I was just trying to get better, and I think it paid off.

Your fans were very supportive during this time. How did that feel, to be backed by such a strong fan base?

That's really what it's all about at the end of the day; they are the thing that keeps me going, because, I mean, that's what's fulfilling as an artist, is when your music is loved and accepted, or makes people feel something, it means something to people. So, to have that kind of support system is everything.

When we last caught up with you for our 2016 October issue, you talked about the music industry’s gross misogyny. Obviously, the music and entertainment industries still have a long way to go, but given all that’s happening lately with the #MeToo and Time’s Up movements, what changes have you seen or not seen within the music industry? Has there been a shift from your standpoint as a singer and woman of color?

I think, if anything, I feel like it's nice that people feel that they, more than ever, have a safe space to share those feelings, because it is a reality of many businesses, many industries, not just the movie industry, not just the music industry. I think a lot of women have those feelings. So, it just all adds to that dialogue and to that narrative, which is important. But I think that there's still a lot to be touched on, as far as the misogyny within this industry, for sure. It's a long way to go still.

Cardi B echoed this sentiment in an interview with Cosmopolitan, stating that women in hip-hop or women whose sexuality is at the forefront of their appeal won’t have their reckoning in the same way that women in Hollywood have. Do you agree with that?

I think it's just important that we keep having these conversations. I think it's just important that we don't marginalize each other, and that we continue to support each other and have these discussions, ask these questions. Like, why is there such a lopsided number between female artists and male artists, black female artists, black male artists, why is hip-hop so lopsided, why is the music industry, in general, so lopsided? Even, like, the voting academy, the Grammy Academy, all these things are incredibly lopsided in terms of gender equality. To just bring those points up, and to have these discussions, I think, are steps in the right direction. It makes me hopeful for the future, for sure.

Who are you addressing in the “Go Easy On Me” interlude?

I think it's just a note to the tone of the political climate that we find ourselves in. In this day and age, I think it's important to know that there are still things going on in the world that may make us feel a variety of emotions, but at the same time I think the album is a certain amount of escapism, and that's important as well.

“Salt” and “Fires And Flames” are two standout songs on the album because of how much softer they are in comparison and in vibe from the rest. What do they mean to you?

"Salt," I think, is a really interesting song, because it touches on feelings of heartbreak, but, at the same time, it comes from a stronger perspective, as much as I have vulnerability in my tracks. "Salt" is just really about, like, when you wind up in one of these situations where the relationship or whatever you had is falling through the cracks, but you just want to go about things in the best way possible, and maybe the other person isn't so reciprocative of those feelings. Because a lot of times, in a breakup situation, people aren't on the same page.

"Fires And Flames" was a really personal song because I wrote that about a situation that I'd been in, just feeling like you want to help someone that you can't help, and those feelings of wanting to... not because, like, you still want to be with them, but because you still care. It's hard to just turn off caring about someone, whether or not you like them or not... Like, I fully, hated this guy at the time, but still gave a shit, and that was confusing to me, and so I wrote this song about that.

With the album finally out, what's next?

I mean, the biggest thing that I'm gonna avoid in the future is talking about my album before it's definitely coming out [Laughs]. Because that was a big, big, big thing that I could've avoided, that I dropped on myself by setting those dates early. So, I won't do that again. But, I mean, I just hope that, moving forward, as far as when I create my next project, it's with the same purpose that I created with this last version of the project. So I hope that it becomes easier and easier for me in that sense. But, you never know, the creative process is always weird, and it has its ebbs and flows. My biggest thing that I'm most looking forward to is touring. I fully never got to do the Joyride tour being that the album wasn't out. So, I'm really excited to revamp the tour and do the Joyride tour justice.

What advice can you offer artists who are currently going through what you have gone through?

You have to be your greatest motivator, you have to continue to make art. You can't let the outside forces kill your creativity, first and foremost, because it's easy to get discouraged. But it's another thing when it affects your output of material, so you have to keep going.