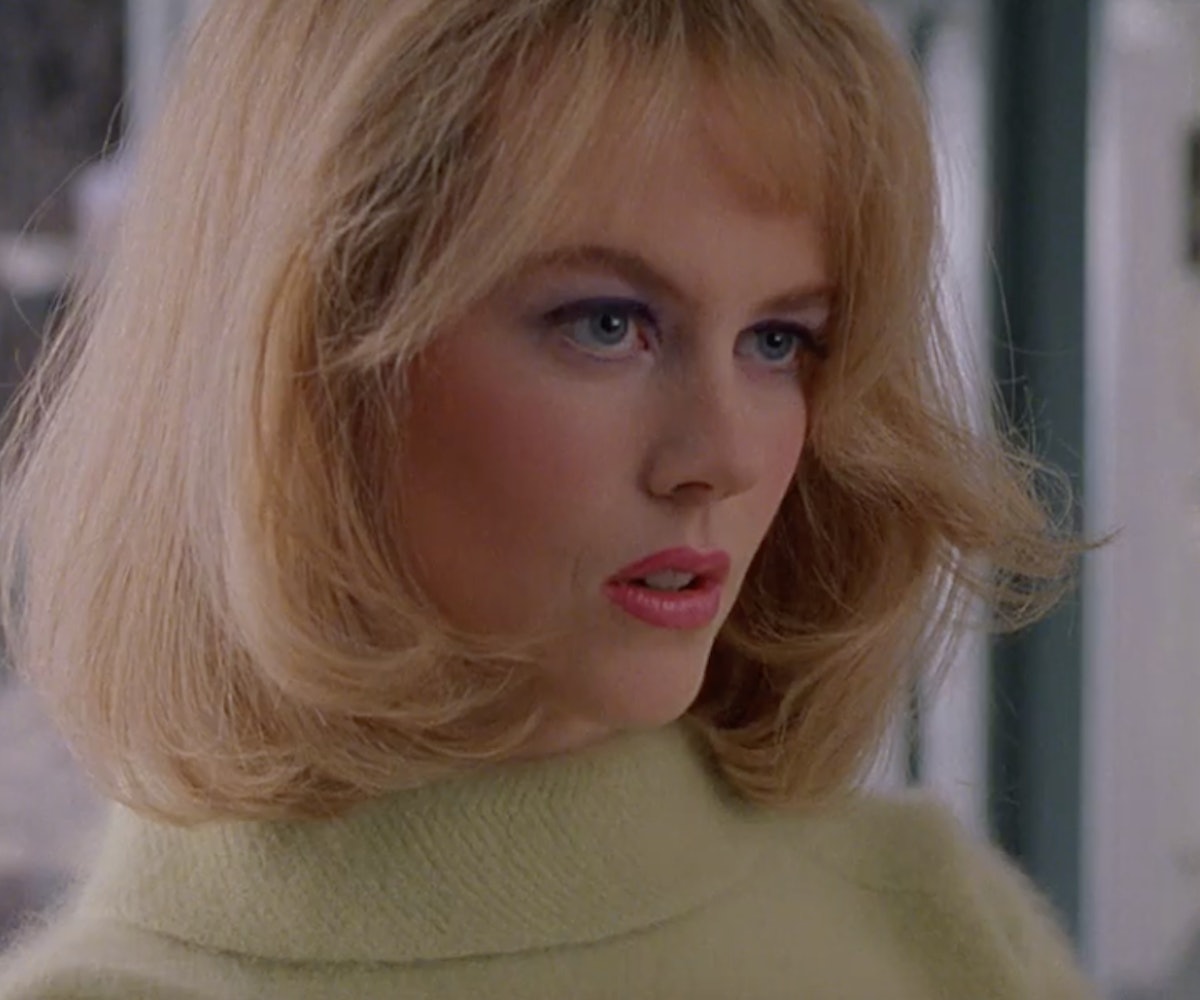 "It's nice to live in a country where life, liberty, and all the rest of it still stand for something." —Suzanne Stone Maretto, To Die For

There's a scene about halfway through Gus Van Sant's 1995 film To Die For, in which Suzanne Stone Maretto (Nicole Kidman) stands in the center of her lavishly appointed living room (she has never met a floral pattern, or a table skirt, she didn't love), and, stretching her endless arms over her messily coiffed head, turns around in a circle, surveying her domain.

Though only a couple of seconds elapse during this rotation, the natural light coming in from the windows fades, and the sconces on the wall start to glow; night has fallen, darkness reigns, and Suzanne—an icy blonde in impeccably fitting high-waisted gingham pants; a cropped, acid green, three-quarter-length-sleeved, mohair, funnel-neck sweater; and a slick of pearlescent, pale purple eyeshadow that I'd swear was Glossier's Lidstar in Lily, if only it had been invented back then—walks languorously to her front door. She has company.

Suzanne was hailed as a particularly delicious, if depraved, villain when To Die For came out, an amoral product of a world in which fame was synonymous with the American Dream; the kind of person who firmly believed that "you're not anybody in America if you're not on TV," and who wonders, "What's the point in doing something good if nobody's watching?"

Centered around Suzanne's enlistment of three grungy teenagers, whose assistance in murdering her husband will, she hopes, allow her to achieve stardom, To Die For is based on a novel by Joyce Maynard, and loosely inspired by a real-life crime, in which a New Hampshire woman conspired with her 15-year-old lover to kill her husband. It is a film inescapably of its time, an era when television fame was still mostly elusive for the masses, before we were inundated with reality shows and a seemingly endless flood of new scripted releases. And yet its message—and its costumes, which are as iconic as another famous film from that year, Clueless—remains ever relevant, revealing the ways in which our manipulation of reality becomes its own kind of truth, and how the quest for fame corrodes everything in our path to get there.

Of course, fame means something different in 2018. Now, we measure success in terms of followers and faves, not network ratings or column inches. But it's all the same anyway, there's little difference between the way in which Suzanne curates her life—from her clothes to her home decor to the handsome husband she acquires and then disposes of—and the ways in which other aspirational people do the same things on Instagram. The shared bond is that they all view fame as being redemptive, social status as being indicative of morality. It is a particularly apolitical way of living, the Ivanka Trump philosophy of life.

The ethical bankruptcy of a culture that cares more about the appearance of greatness, of happiness, of liberty, and all the rest of it, than the realization of those things, is on full display in this film. But what is perhaps most remarkable is how easy it is to see why the Suzannes of the world are still so seductive, how all it takes to garner followers is a carefully presented appearance of beauty and success. To Die For is a cautionary tale, one that should still be paid attention to today—particularly as other conniving blondes try to convince us of their morality, try to convince us that they are fundamentally good, but have just been led astray.

Dazzling as Suzanne might be, perfect as her pout is, it's important to resist the temptation to buy into the image that she's created. There's nothing particularly exceptional about being able to model your home in the style of what you see on TV or on Instagram, nothing that special about getting a haircut like your idol's. And, in fact, that's why it's all the more important to call out the Suzannes of this world on all their bullshit, to remind them, for example, that they're not self-made, that they're just constructs—and not even very original ones at that.

Or, as Suzanne's sister-in-law, Janice (Illeana Douglas), points out when marveling at how Suzanne used to brag about designing her wedding ring: "It was round... and gold... I mean, big fucking deal!"