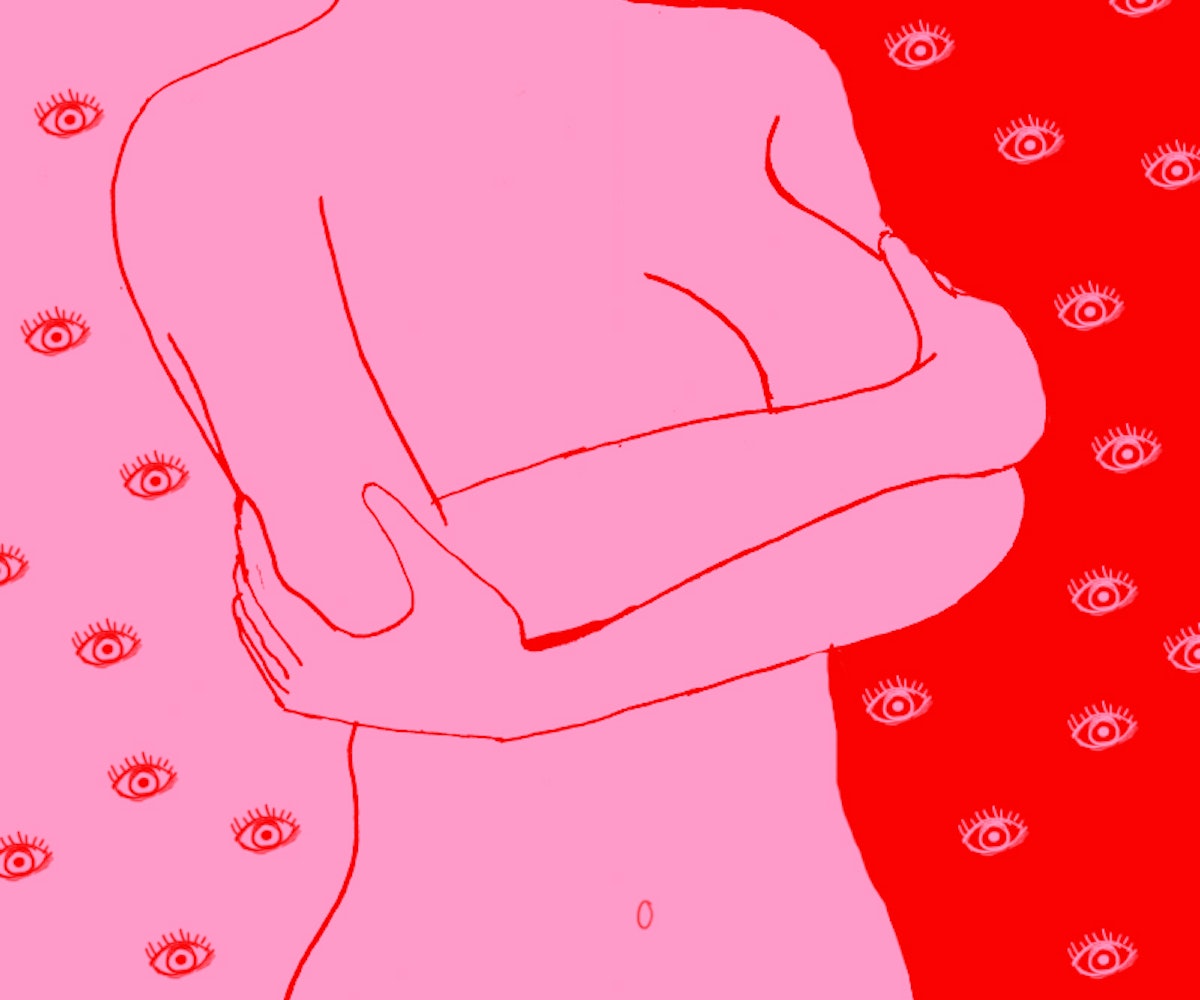 Illustrated by Ricky Michiels
by Devan Diaz
May 13, 2016

With a watchful eye hanging above every interaction, life takes place outside of my body. Protection fashioned through performance as a way to interrupt my viewer: this is my trans womanhood in public. Adopting foreign movements—shoulders pulled back, a permanent smile—to accompany the self-inflicted inflections in my voice, just to be perceived as cisgender. I anticipate their movements in response to my body, so I can calculate if their intentions are rooted in violence or ambivalence. The start of a life of self-preservation is an education of the self behind the lens of the spectator. Eyes pausing on a feature that testosterone left its mark upon is the catalyst for future hours of examination. Hours later, I study this feature and strain myself to recall how it looked before it was muddied by their gaze. By this time, there are twelve hours before I’m due at work, and only three of those hours will be spent sleeping. Distraction for my wounds, I repeat the same questions that arose the last time this happened.

“If they knew, how did they know? If they didn’t know, why did they stare?”

I assess my capital in femininity. Here is the perfume I was wearing when a boy who didn’t know my gender history asked me out. There is the outfit that shows the dip in my waist. Whether these creations were innate or acquired didn’t matter. This was survival. In my bedroom was where my womanhood existed without these patriarchal devices. In the mornings when I construct this presentation, it is for the purpose of its deconstruction in the evenings. In my bedroom is where retaliation lives.

Enclosed by bookshelves of words that were written and read in search of communion, the unraveling began. I listened to the hum of the words "safety" and "woman," each time they traveled across any book and journal in my possession. Coated by women of cisgender experience, the only sign of trans womanhood on these shelves could be found in my own writings. As formative as the cisgender writers had been for me, there was a stopping point for our relationship. My transness began where their cisgender identity ended. From a fountainhead for redemption flowed streams of the responsibility to place a trans experience on the shelf that took a hold of me. I began to write. I wrote for my immigrant grandmother, who learned how to read at the age of 30, when she could no longer be silenced. The bite of my pen was the break of this generational curse. I pressed my pen harder into the paper. Both familial and cultural, the commitment to heal was my ancestral blueprint. Phantoms of stories untold were my only suitors.

Candy Darling, a transgender actress of the '70s exploited by Andy Warhol, sat atop my bookshelf. Smoking her cigarette, she oversaw the continuation of our history. Rachel, a Mexican trans woman and the inspiration to many of Lou Reed’s greatest hits, stood by my window as a watchtower. Just as people of the past never dreamed it would be possible to fly, the documentation of our lives wasn't meant to stand on firm ground. Bypassing the men that have historically spoken for us, we stepped around our assigned role of muse. Men were no longer the intermediaries of our narrative.

The first time the role of the muse was handed me to, I was told that I spoke like an artist. Not that I was one.

I was 21 years old, one year into my medical transition. My womanhood was an infant. The man before me was 31 years old, a decade of experience ahead of me. Beyond that, as a cis person, he’d spent a much longer time in his gender. His compliments were carefully selected so that when I began to inform his work and thought process, it would appear to be my idea. He was an artist, and his art paid his bills. Dazzled by this New York City myth come to life, I tailored myself to his desires. Pushing my best ideas forward, I twisted and turned around every corner of his mind. Taken by his Lower East Side uniform of a beard and tattooed arms, I became addicted to the adjectives he stuck to me. Underneath him, I was mature for my age, wise, and unlike any other trans girl he’d ever met. To express my gratitude, I nourished him with my own brilliance. When he extended an invite to a hotel that cost the amount of one of my paychecks, I considered myself lucky.

I entered a room with panoramic views of the city. Our windows were eye level with the skyscrapers, no longer making me feel inconsequential. That night I was on par with the Empire State Building. Sitting on our temporary bed, I watched his eyes appraising me. Finishing his drink, he asked me to stand in front of him.

“God, you’re so pretty. I’ve never seen a trans girl like you.”

I smiled on command, ignoring his disdain for my sisters. I didn’t want him to know that I was just like them. When my clothing crumbled into a pile around my feet, it was my last act in shedding all that tied me to the other women who weren’t deemed worthy of being here. All that mattered was the continuation of his admiration, and my body would pay the price. Lying down, my limbs and developing breasts were my only offerings. He began to draw, reinterpreting every curve of my body to serve his agenda. When he revealed his work, I wondered whom he’d just spent his evening with. There on the page was a woman who could’ve been any of the women he’d discarded in the past. All that was recognizable was his attention to what was between my legs. The part of my body that had caused so much trouble in my life was all that he was interested in.

Unwilling to sever our ties, I opened my body as my response. Taking him into me, I hoped his praises would register in body and become true. I winced to expand myself as he entered with ease. Finding pleasure in my struggle to accommodate him, he told me it would be over soon. Stepping away after his release, he began to get dressed. He had a flight the next morning, but I was welcome to stay in the hotel room by myself. This was his token of appreciation. On a bed that only belonged to temporary lovers, I watched him leave. The next morning, the view's stark concrete in sunlight replaced the lights of the city. Flaws were visible, their presence no longer welcoming. My stay in this life was over. The text on my phone alerted me that he was headed to Europe. He didn’t know when he would be back. He never came back. What did come back was the news of his art show. The conversation was set around a single drawing of a faceless trans woman exposing her penis. There was no mention of a name or of the evening that produced this work. My purpose had been served.

In his absence I found creativity. There was an erotic satisfaction in keeping my charms all to myself, and guarding them through my writing. For fashion designer Gogo Graham, her trans experience gave birth to her creativity. I first discovered her while the world slept, at 2am during an endless Tumblr scroll. The first image was of a trans woman in control of the way clothing hung from her body. Each girl that walks in one of Gogo’s shows works closely with her, ensuring that the clothes fit their body to their liking. Confronting the audience with the beauty and reality of the trans femme experience has become a hallmark of this brand that disregards the fashion system. When I asked her to speak with me, she replied within an hour of my email. Hearing her voice over the phone for the first time, I recognized something familiar in her tone. We both wanted to get our stories right. Both of us are from the South, and I was comforted by the slow cadence in her voice.

“I was in denial about my gender identity. When I came out, everything else came with it, including the creativity” —Gogo Graham

An ex-Biology major, she had dreams of New York. While she dreamt of the city in Texas, I was forging my path from Tennessee. Arriving in New York City, she found a community where she could construct her identity freely. “There’s something excellent about everything a trans girl does,” she said with a smile in her voice. We agree that by existing on the margins of the cisgender narrative, creative trans women have the ability to look at the world objectively. Allowing this to be her guide, every garment she creates is made with the woman in mind. Gogo creates clothing that echoes the voice of the wearer in its seams. In her latest show, the models appear drenched in fake blood, mirroring '70s horror films. In a language the audience can understand, Gogo handed the cisgender viewer the weight of our politicized existence.

“I wanted people to feel how we feel” —Gogo Graham

The effect was haunting, although not free from the artist’s own critique. For future shows, she is committed to making a political stance that is true for her. Although all trans women experience violence, black trans women experience the bulk of that violence. Gogo, from her experiences as a mixed-race Japanese person, is aware of the danger in telling a story that's not her own . Nonetheless, the resourcefulness of her work is palpable and directly learned from her own trans experience. Without mass production and large corporations financially backing her, once a season she gathers trans women across race, size, and identities. For an evening, she creates a trans-centric space in the middle of a fashion week that often turns trans people into a trend.  Here is where trans creativity in New York comes to thrive, and all the women can be seen as they see themselves.

“We need to hold onto these things – this is what makes us who we are, and it’s all we have” —Gogo Graham

Alone in my bedroom the day after our conversation, the sun was my only visitor. It was the time of day where the sunlight reached every plant, book, and painting in my home. Life was greeting me, beckoning me to write this piece. To create something as a trans woman is to extend oneself beyond the carnal. As our ideas of gender shift, the creativity of trans women is making this change known and felt. As cis people at large begin to feel this shift, they are already reacting to us. We are being kept out of bathrooms, shelters, and history. A trans woman defending herself through creativity is a way to ensure the cisgender gaze no longer controls us. This control must be confronted, and our creations are the evidence that we deserve to expand and place our history on the shelf. We are survived by our will to create.