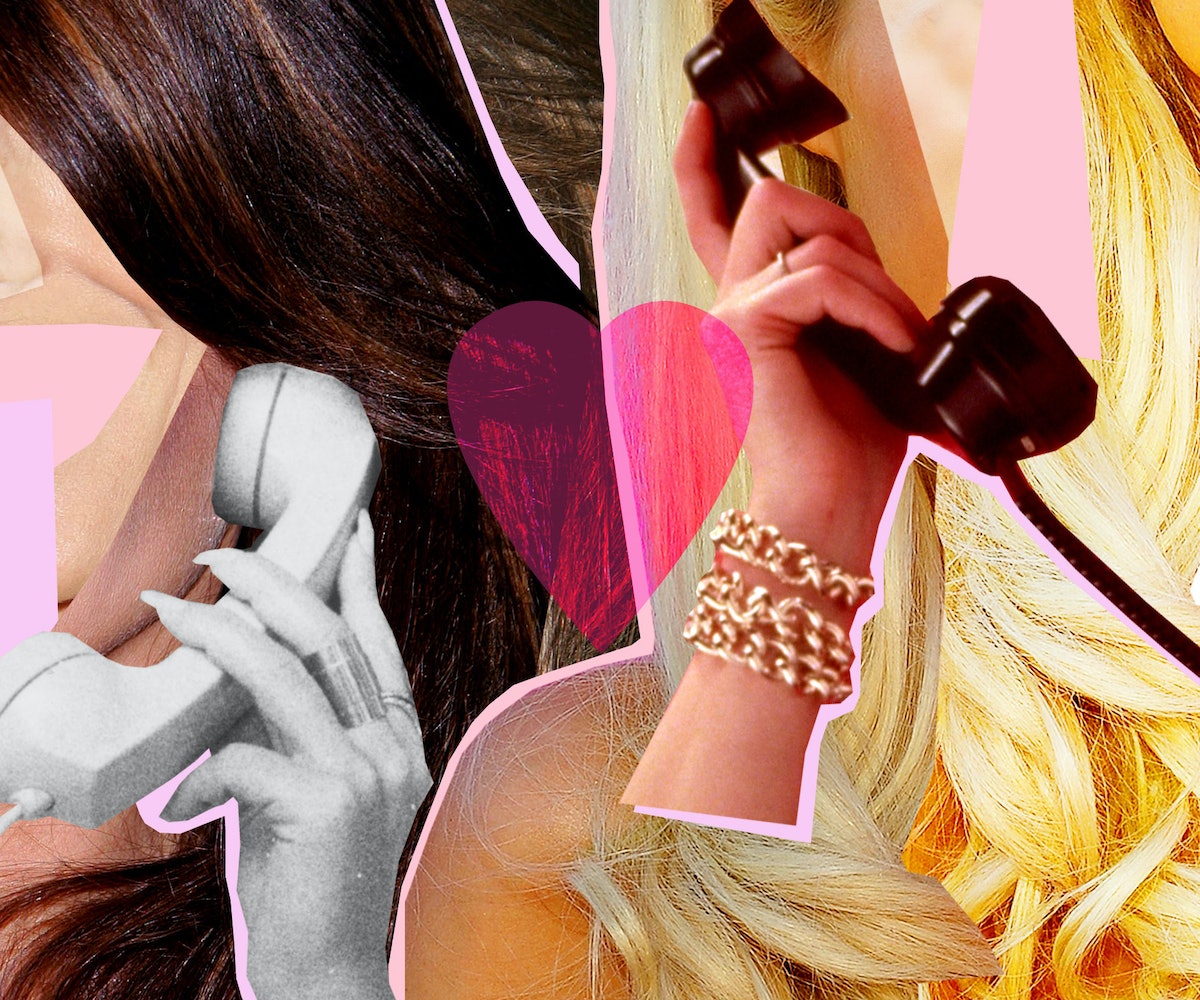 Loving a man can be brief; knowing a woman happens with time, it matures. Existing with my trans womanhood on the margins of romantic and familial love, I became accustomed to the embrace of my own hand. Bearing the untapped resource of love that was reserved for other people, I attempted to pour it back onto myself. This solitary baptism took place parallel to the lives around me. I watched relationships begin and end, babies being born, and I was nearly finished with love. That is, until I felt the presence of a home being built next to mine. A collection of stories, laughs, and heartbreak came together in the form of a woman.

She materialized from a haze of curly hair, with strands in dialogue framing her face. Her eyes echoed my own story of a trans womanhood that had been earned. Love that exists somewhere between platonic and romantic had found me, just as my sights had been set on the opposite direction. She was someone to transcend sisterhood with and share the responsibilities of motherhood. A hand to grasp that was not my own. Sisterhood assembled itself as we assembled our bodies. We met in the region of the Internet that was designated for girls like us. Both of us were still using the names that were given to us without our consent. While everyone slept, we coaxed the girlhood of our shared childhood dreams into reality.

We purchased illegal hormones online. We reintroduced ourselves to each other in new hairstyles and shades of lipstick. The physical world wouldn’t make room for our growing breasts and expanding hips, so we ventured into each other’s hearts. Our delayed puberties took place as we shared the stories of watching our two older sisters develop into themselves. We were both the unacknowledged third daughters of our mothers. Having never lived in the same city together, our world was created over the phone. In the evenings we could cast away our fears and retrieve them in the morning.

Our flourishing bodies demanded new names. Jasmine chose her own name, and she unknowingly became the embodiment of the nocturnally blooming flower that grew outside of my childhood window in Tennessee. My new name was chosen out of necessity, when the doctor administering my first shot of legal hormone therapy asked me what I would like to be called. This accidental name fit easily into my life, as it was similar to my dead name. However, "Devan" didn’t mold itself to the mouth of my Spanish-speaking mother. Hoping she would undo the damage caused by the first name she gave me, I came to think of my new name as temporary; she promised to rename me, and I waited until well into my transition. When the reversal never took place, I consulted the only woman who had witnessed my second birth. I called Jasmine to ask her to give me a middle name that could accompany me when we were away from each other.

"Isabel" she said, after weeks of deliberation. "It means ‘Pledged to God.’" Somewhere between her rural Maryland and my concrete New York, the angels watched us pledge allegiance to each other as this ceremony took place.

We carried our love into the world like an amulet. Our phones were our gateways back into our alliance. However, the protection of our pledge had limits. Men quickly found us, and we were tempted by the allure of romantic love. Romance was a chance to prove to the world that trans women could be loved. Ignorant to the fact that we were being seen as temporary in their cisgender lives, we let ourselves be the sort of women who imagined having children and weddings. We told each other it would different this time, that we were destinations instead of detours. The shelf life of these sorts of relationships lay unexcavated as their expiration dates drew nearer. We weren’t meant to find the photos of them cheating on us with their real life girlfriends, but we did. The man I loved was scattered along every social media platform, with a smiling cisgender woman his mother had envisioned for him. Trying to give each other answers to the questions left in their absence, we repositioned ourselves back at the intersection of motherhood and sisterhood.

We reacquainted ourselves with the shelter of our friendship. Our voices filled the newly empty spaces beside us. We described our surroundings to one another to prove that we still existed. Through her descriptions I could smell the late summer of Maryland. Sitting on my fire escape, I described my clear view of the Empire State Building. I told her how its lights went out at 3am. Most nights, we clung to each other’s voice long after that. Although the ties of our bond thrived at night, sometimes it spilled into daylight. One day while at work, my phone tells me I have two missed calls. In the past she’s told me it’s because the call never goes through the first time, but I don’t believe her. I excuse myself to the bathroom and lock the door. The sound of water running adds a blanket of protection from the outside. She picks up after two rings, and we usher each other back into the world only we inhabit.

“Do you love me?” asks the voice that was with me before either of us fell in love. We abandoned formal greetings somewhere along the way, but this sort of emergency typically occured at 2am instead of 2pm.  “Of course I do, I love you the most,” I say with the confidence her voice is lacking. Being well-trained in the variations of her silence, I listen for signs of her breath stabilizing. A knock on the door tells me that our time has run out. “I get out of work soon, I’ll call you when I’m home okay?” I whisper, hoping this brief exchange is enough to tide her over. She exhales, “Okay. I love you the most, too.”

I stall the return of this phone call for as long as I can. Those who know, you can easily find traces of heartbreak. Jasmine can always tell I’ve been crying, no matter how much I practice speaking normally. For this reason, a Tinder date can be a diversion from the truth. Every calculated movement and inflection becomes part of the new disposition that’s been created for that evening. That night I go with a safe New York option, an investment banker from Connecticut. While running through the preliminary first date questions, I ignore that he drinks the same beer as the man I’m there to forget. I hold my tongue and try not to disclose my transgender status. Tonight, the spectacle that precedes my body can wait. I disregard the lust in his eyes when he invites me to see the roof of his apartment. As we get in a cab headed in the direction of his home, I allow him to kiss me. My cell phone buzzes with Jasmine calling me back to safety, but I ignore the call. I extend my stay in the world that I can never call home.

As we step onto his roof, the views of New York City feel like memories I can almost recall. They might as well be from famous photographs, or memories of previous summers in the city. I get close to the edge, looking anywhere but at him. I feel him behind me, kissing my neck inches away from the favorite spot of the man that left me. As his hands hold my newly formed hips, I see into the apartments of the building across the street. Manifestations of the life that had been taken from me come to life inside of those windows. I watch as a small family gathers around a television to watch a movie. Moving lights flash onto the smallest child who has fallen asleep in her father’s lap. In another window, I see a couple sharing a bottle of wine. They sit close together, their limbs falling in line to suit the existence of the other. The different styles of furniture in their home are a clear product of their lives merging together. As I place myself inside of their lives, a pair of unknown lips find their way to my wet cheek and ask, "Have you been crying?"

The dampness on my face is a signal that the truth can no longer be stalled. The mannerisms of the girl I had created fall away. Neither of us knows what to do with the presence of the woman that has orchestrated a false evening. Before being called to task, I plan to flee. I fix the neckline of my blouse and look at my phone. Two missed calls. I tell him that there was an emergency and I have to go back home. Home is waiting for me on the other end of my phone. Once I am in the elevator, I realize that my necklace is still with him. I hope he will use it as a souvenir of one of the worst dates of his life.  The doorman looks at my tear-stained face with concern and I realize I hadn’t stopped crying. I'm grateful that eight million people lived in this city, and I never have to see either of them again. Once outside, I hail a cab immediately. Crying girls must be high on the list of people who need a quick escape.

As the cab drives over potholes, the sudden movements remind me of the four gin and tonics I had consumed earlier. In an attempt to stabilize myself, I make a temporary bed out of the backseat. From here I can see the nape of my cab driver’s neck and the moon. This is the same moon that has kept a watchful eye on every conversation Jasmine and I have shared. I find her in the contacts of my phone and she picks up after two rings.

“Are you okay?” is the first thing she says, and I hear how annoyed she is. “Are you committed to me?” I ask, needing to know that someone wants to be there when I’m gone. “Of course. Of course I am. Are you home?” I can hear her trying to figure out where I am. “Nearly. Just in a cab, crossing the bridge. It’s a full moon tonight. What do you see?” I close my eyes and wait for her response. “The clouds are covering the moon here. This always happens. What else do you see?” she says slowly, probably realizing how intoxicated I am. “I see us decorating an apartment in the future, and I see you being the godmother of my babies.” We both pause to allow this visual the room it needs to expand. Finally, she says, “I love you the most, Devan.”

“I really love you the most, Jasmine,” I say.