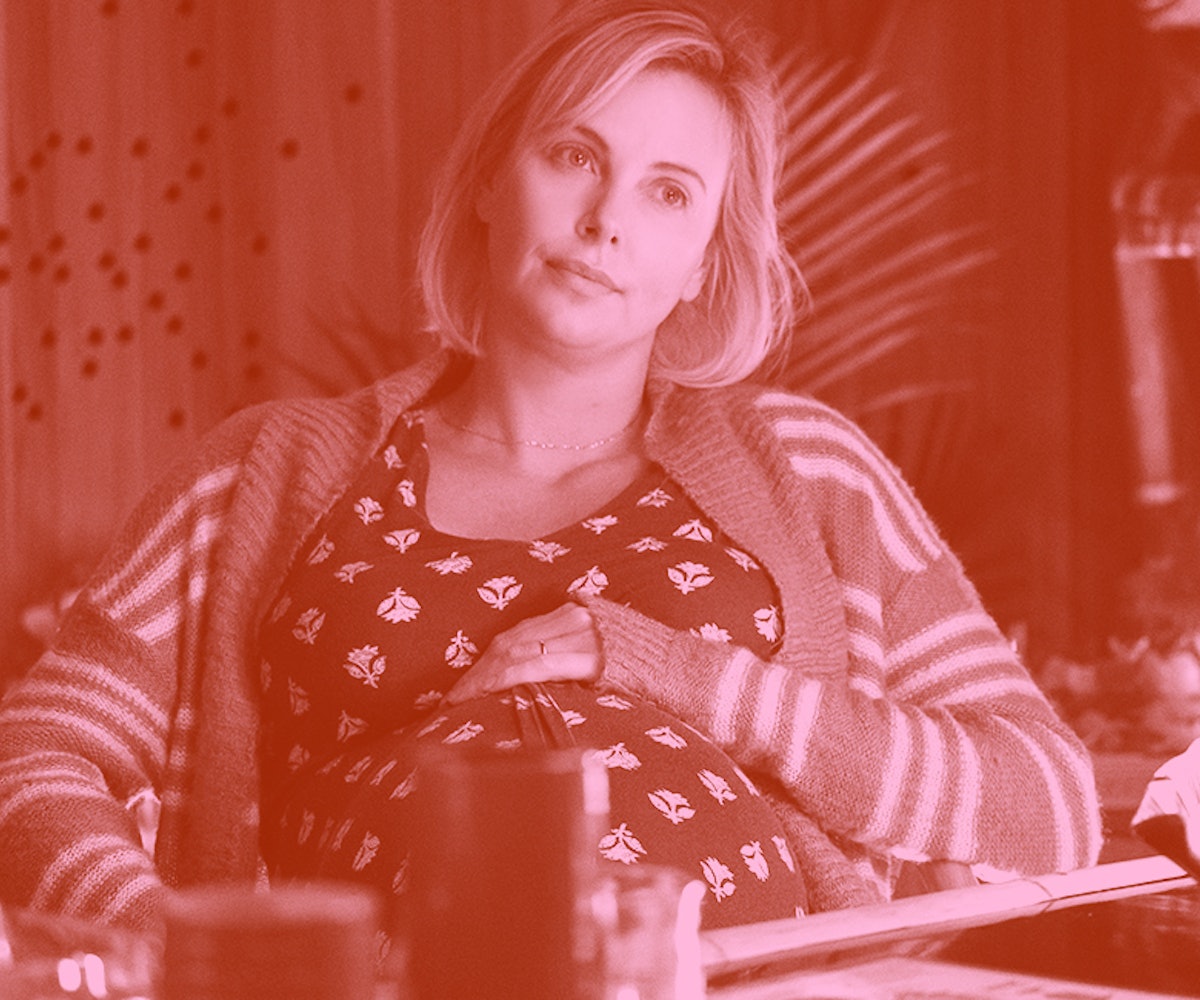 To be a mother, to give birth, is to welcome a foreigner. -Jacqueline Rose, Mothers: An Essay on Love and Cruelty

I used to look like that. -My mom, watching a beautiful young woman putting gas into her two-door coup, sometime in the 1990s

The first shot in Tully is of a full-term pregnant belly—director Jason Reitman initially keeps the camera’s gaze at fetus-level, so that the movie-star face of Charlize Theron, to whom the prosthetic bulge is attached, is cropped out of the frame. So you’ve won an Oscar and modeled for Dior? Who cares—when are you due?!? To be a mother, in Diablo Cody’s script, is to be threatened with the total effacement of your individuality. The movie isn’t even named after its protagonist. Theron plays a woman named Marlo; Tully is the name of the “night nanny” played by Mackenzie Davis, who shows up to help Marlo with her infant daughter and locate her lost self in increasingly magic-realist ways.

For much of its runtime, before and after Marlo and husband Drew (Ron Livingston) welcome baby number three in a very low-key we-got-this-down way, Tully is extraordinarily attentive to the labor, physical and emotional, of their parenting, from the daily battle stations of getting everyone ready for school on time to the mental red-alert vigilance required as their younger son’s sensory processing disorder endangers his place at a schmancy private school. There is a striking mid-movie montage of breast-pumping, midnight feedings, diaper-changing, clothes-staining, and stepping on left-out Legos—striking less for its moderate tactility than its sheer duration. (However fatigued, though, the characters still have access to Cody-esque one-liners. Told that her son is “quirky,” Marlo reaches back to the mid-to-late aughts to make a tartly timed ukulele joke.)

The film is good on the gendered division of labor, with Drew coming home from his deadly dull consulting job and accruing, in his mind, karma points for cameo appearances in Marlo’s constant homemaking; and on the mental exhaustion that leads to empty-calorie veg-outs. Marlo’s self-care is the Showtime reality show Gigolos, while Drew puts on headphones and plays video games—this is not a subtle movie, so someone even explains that Marlo likes the gigolo shows because she wants someone to take care of her, though if Drew’s preference for first-person shooters symbolizes repressed rage rather than childlike regression, it seems to have escaped everyone involved. One potential point of comparison for Tully is The Babadook, in which parenthood is likewise depicted as a life force-sapping minute-to-minute challenge, until a turning point arrives alongside a mysterious apparition. In this case, that would be Tully, who proves to be something akin to Marlo’s shadow-self.

Coming on via the recommendation, and payroll, of Marlo’s plot-device yuppie brother (Mark Duplass), Tully has a sort of dirtbag doula vibe, dispensing ineffably cool yet deeply hippy-dippy pearls of wisdom and sporting greasy hair, crop tops, and mom jeans showing off hips that no one could reasonably describe as “child-bearing.” Wittily played by Davis, who situates this millennial archetype along the disputed border of enviable and irritating, Tully appeals to Marlo by offering glimpses of a life and interest that aren’t totally child-dominated. Her vague stories of juggling boyfriends and roommate drama remind Marlo of her years living in Bushwick, before she had kids (the movie’s timeline suggests she lived there in the very early 2000s, which would make her a very advanced hipster), and, as in Noah Baumbach’s While We’re Young, that gentrifying Brooklyn ‘hood represents a Brooklyn of the mind, a place where the characters’ vanished possibilities and cultural cachet still thrive under blithely fortunate new stewards.

Tully is Marlo’s childless double, even before a late-movie twist telegraphed through dialogue and scenes that escalate awkwardly, but more than a stand-in for general anxieties about aging, she’s the fulcrum for a narrative in which to be a mother is to risk severing yourself entirely from the person you were pre-parenthood in ways that go beyond the skin-deep—or rather, given Theron’s well-publicized weight gain for the role, ways that go beyond the subcutaneous. Marlo and Tully talk about how cellular replacement means that the new baby will be “different in the morning,” and have a conversation that paraphrases the Ship of Theseus paradox; it is very clear that Cody has watched the Richard Dawkins TED Talk with the “you are not the stuff of which you are made” quote. Marlo initially resists bringing in someone to watch the baby at night because of her fear of having a “stranger” in the house with her kids, but the question the film wants us to consider is whether the stranger is Tully, the new baby, or Marlo herself.

I am the absolute last person in the world to speak about how incrementally or absolutely motherhood changes a woman, biologically or psychologically or metaphysically—though I do have a friend, a single mom in New York City, who has claimed semiseriously that, once her sons learned to feed themselves, her dog was a bigger hinderance to her dating life. Yet despite Tully’s welcome interest in the nitty-gritty of breastfeeding, its perspective on motherhood is at least as much metaphor as mimesis. For one thing, if having a third child would derail their lives so badly, why didn’t Marlo and Drew have an abortion?

Well, because if there’s no baby, there’s no movie; and god knows plenty of presumably pro-choice couples have made the choice not to terminate their own pregnancy. Yet the couple are in their early 40s and this pregnancy was a “surprise,” their pre-pubescent son and daughter appear to share a bedroom, Marlo has an apparent history of postpartum depression, and the extra care required by a special-needs children is beginning to tell on their well-being—surely the subject would have at least come up? (And it appears that Tully unfolds in the same Cody-Reitman Cinematic Universe as Juno: a place much like our own, except that in the C/RCU there are no condoms or, per this film, vasectomies.) It’s notable that this woman-authored film’s focus on the female experience does not extend to reproductive choice.

Still, Tully’s attention to the tribulations and rewards of motherhood is no small thing—it could even be a “movie of the moment” in that it depicts a woman’s struggle to maintain her autonomy. But the film also belongs in the tradition of resonant art made by and primarily for well-off white folks. (If you think this is necessarily a dismissal, remember that this writer referenced a Baumbach movie a few paragraphs up—and not even one of his better ones.) The film addresses the economic stress of parenthood, particularly via the belt-tightening required to bring on adequate childcare, and there’s a gratifying moment when Marlo mentions having held off on going on maternity leave through the last Friday before her due date. But these are the issues that specifically afflict a two-parent, two-income, home-owning family whose extended relations are even better off than they are. Tully features a late-movie car crash which brings about a moment of catharsis, and please don’t think I’m merely being pedantic when I say that you’d have to have incredibly good insurance for a near-fatal one-car accident to be a teachable moment and not the first step toward total financial oblivion. One in two Americans couldn’t come up with $400 in an emergency without going into debt, and while Tully’s attention to straitened middle-class circumstances is specific and relatable, it’s also the kind of thing that allows the crutch of “economic anxiety” to be used by people who look like Roseanne, at the expense of examining what real poverty looks like. This is even more true in a film about motherhood, which for many American women contending with inequality, abuse, and racism, contains the looming threat of an erasure of the self far more literal than in Tully.