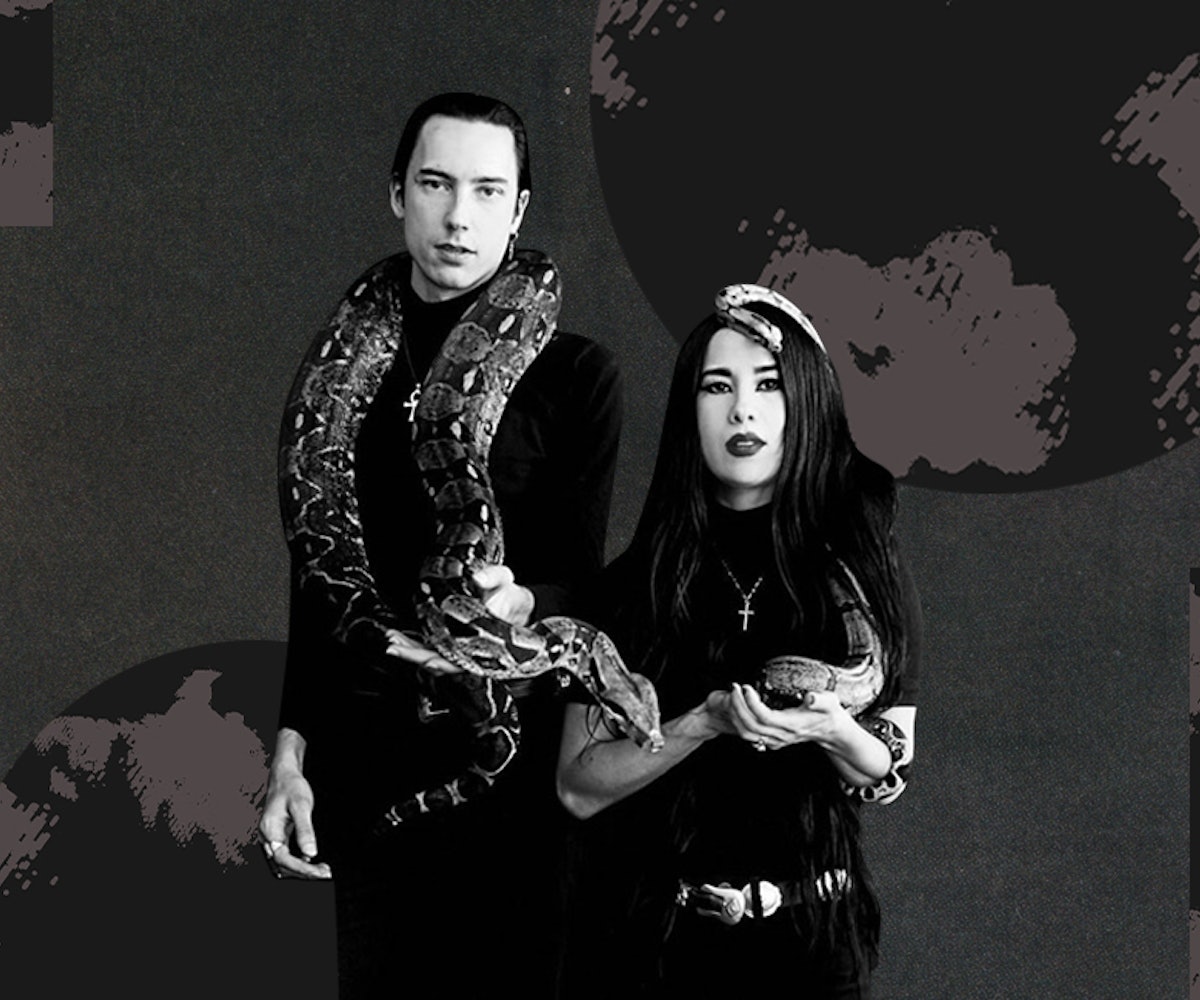 Red lights shined down on the stage, as an organ played a haunting melody fit for a vintage horror film. Echoes of “Hail Satan” and “Hail Babylon” ricocheted off of the walls of the Echoplex as a woman clad in black lace lifted a chalice to the sky, only to have an inverted cross thrust into the cup. She took a sip of what looked like blood, the red liquid dripping down her chin. The sacrament was done, and the offering closed.

This is the Satanic world of Twin Temple, and we’re just living in it.

Alexandra and Zachary James are the high priestess and priest of Twin Temple, a seven-piece Satanic doo-wop band hailing from the city of Angels. While many confine Satan to the likes of black metal, the duo is breaking the notion that Satan has a type. After all, who says Satan wouldn’t get down to some classic Americana-meets-occult Amy Winehouse tunes? Through their practice with Satanism both on and off stage, Twin Temple is challenging notions about what it means to free the oppressed, fight back against dated and binary ways of thinking, and doing it all while hailing the dark lord himself.

“Satanism, as a concept, was just a historical way of othering and oppressing groups of [already] typically oppressed people, from the genocide to indigenous people to the witch trials in America. All these people were lumped into the category of ‘devil worshippers,’” Alexandra explains. “Satan as we know it, as an archetype, is really born out of Christian mythology. It wasn’t until the Church of Satan and Anton LeVey in 1966 that people turned it around and embraced it.”

So no, Twin Temple doesn’t drink the blood of virgins or kill babies to sacrifice on the full moon. The church has always been threatened by outsiders who claim their power, and Satanists are no different. The Christian archetype of the devil being everything God is not is also a dualism that Twin Temple pays no mind to. Both their music and their practice of Satanism are rooted in the ideals of free will and giving space to those who are often not allowed any. “For us, [Satanism]’s a way of aligning ourselves with the adversary, with the outsider. Attempting to subvert social norms, exalt the individual, and understand that everyone has the right to their own free will and to do what they please,” the band says. “Ultimately, at its root, it’s a humanistic thing, it’s about recognizing that were just one humanity. At the end of the day, the point is to transcend it and transcend dualistic thinking like God versus the devil, or mother versus whore.

Though the goal of the band is to “empower the oppressed,” it also is worth noting that they’ll definitely make you rethink your definition of Satanists. Both Alexandra and Zachary are commanding in their presence. Alexandra’s often draped in layers of vintage black lace and leather, donning a veil and elbow-length gloves on stage to perform her rituals. Zachary is just as striking, in high-waisted trousers and vintage-inspired silhouettes often topped with an inverted pentacle necklace. While their sound is a striking blend of jazzy melodies and riffs coupled with classic Americana and jazz motifs, Twin Temple also knows the power of performance. Inspired by vintage horror flicks, performance art, gothic literature, and ceremonial magick, to see Twin Temple in their element is to feel their power. After all, the band was started on Halloween (a witch’s sabbath) in 2016 when a destruction ritual was performed, and Alexandra and Zachary stepped into their power as Twin Temple, energetically killing all their previous incarnations up until that point.

Although you may expect heavy guitar riffs and a thumping bass to accompany cries of “Hail Babylon,” if there’s anything to expect with Twin Temple, it’s the unexpected. Instead, you’ll hear old-school, classic Americana-style riffs and Alexandra’s crooning voice that sounds straight out of the ‘60s. Inspired by old-school recording studios, Motown, and doo-wop bands, Twin Temple rejects conformity of any kind, whether it’s through their magick, performance, or sound. “We’ve always loved classic American music and rock and roll, but Satanism and the occult have always been this thing relegated to metal and black metal,” they say. “And one day, we were like, 'What the fuck? This is part of our life, this is part of our identity, this is something we’re truly passionate and interested in, why can’t we listen to Roy Orbison and hail Satan?'”

And while a lot of “Satanic” metal bands begin and end their worship of Satan on stage, the same can’t be said for Twin Temple. “We’re kind of different because I think a lot of the Satanic movements that are happening today, like The Satanic Temple, are this rational, political atheist organizations, where we’re actually practicing magicians and students of the occult. We’re a paradox, we honor the philosophy and we also walk the path of believing. We practice ceremonial magick,” the band says. And, as they point out, they’re “hella left-hand path,” meaning they use music, sex magick, and ritual to create their own Satanic paradise that they share with their audience via music and performance.

Though Twin Temple’s music and performances are both striking and haunting in the most glamorous of ways, the duo still has more up its sleeve. Besides their first full-length album, which should be released later this year, Twin Temple is also using their practice to help inform and empower others, namely about what it means to be Satanic and a witch. They hope to incorporate a panel on Satanism, high magick, and witchcraft before their shows, with their next being on June 22 at the Ace Theatre in L.A. Until then, you can find them on Spotify and Instagram, igniting the world with a Satanic flame with the voices of fallen angels.