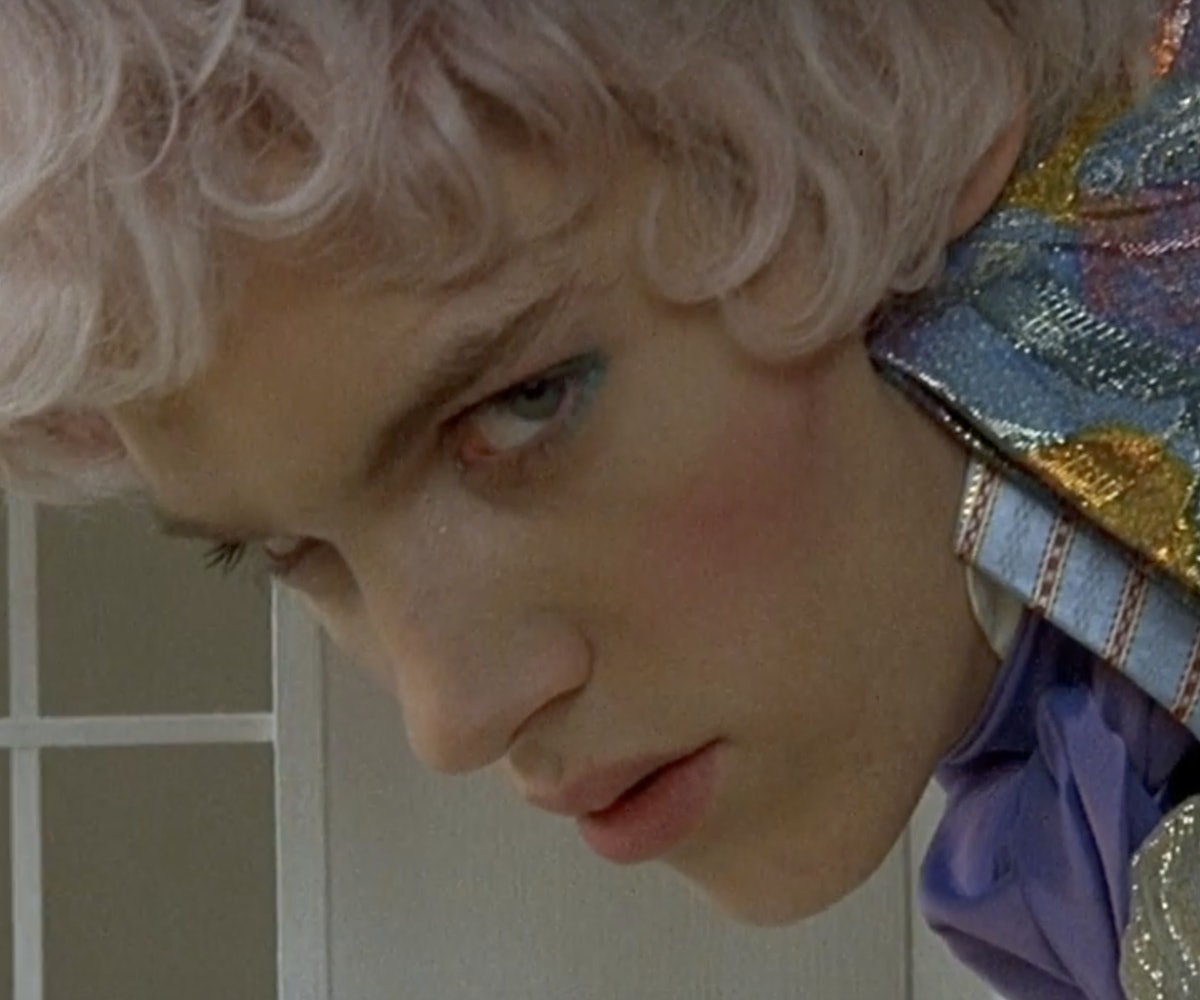 "The hallmark of Camp is the spirit of extravagance," wrote Susan Sontag in her 1964 essay, "Notes on 'Camp,'" which, as it happens, is the basis for the 2019 Met Gala's theme.

Velvet Goldmine, Todd Haynes’ 1998 glam rock epic (and thinly veiled Bowie biopic) is animated by extravagance. The film became a cult classic due to its Citizen Kane-esque fallen icon narrative, vibrant cinematography, overtly queer themes, and a soundtrack featuring the likes of Brian Eno and Thom Yorke. It oscillates between a dreary dystopian reimagining of New York in 1984 and flashbacks to the musical wellspring of London in the '70s, featuring a motley cast of characters whose wardrobes are at once distinctly dated and timeless even 20 years later.

The looks in the film won acclaimed costume designer and power suit goddess Sandy Powell a BAFTA Award for Best Costume Design in 1999, and seem to have prophesied the current revival of vintage. The inherent camp of Velvet Goldmine's '90s-does-'70s styling, with its ultra-saturated colors and fantastical silhouettes, lends itself to an exaggeratedness that feel suddenly chic in the era of UNIF and Dolls Kill.

Sontag argues that an important part of the camp sensibility is "the ambition on the part of one man to do what it takes a generation, a whole culture to accomplish." Velvet Goldmine was a lofty undertaking by Haynes, who approached the film as a sort of period piece of the glam subculture. Haynes, who is known for consistently doing right by fringe narratives, was conscious of the over-the-top artifice of the film's cinematography, saying, "I took [the glam] tenets—dressing up and being fantastical and non-authentic—and tried to apply them to a film." At the core of this movie is a decidedly authentic story about coming to terms with one's past in order to embrace the future, all cloaked in heaps of pleather and faux fur. Regardless of the apparent superficiality of the aesthetics, they're worth re-examining, especially from the vantage point of the age of social media. As Andrew Bolton, curator of the Metropolitan Museum of Art's Costume Institute, said in a statement regarding the Met Gala, "We are going through an extreme camp moment."

Below, we compiled some of the most memorable characters and their aesthetics, in honor of the film's 20th anniversary this month.

The dandy virtuoso Brian Slade (played by Jonathan Rhys Myers) is the focal point of the film. Slade’s ever-evolving wardrobe draws from a hodgepodge of influences, ranging from rococo opulence and raggedy bohemianism to sleek androgyny and space-age technicolor palettes. As the spearhead of the glam rock movement whose mysterious disappearance from the public eye drives the plot, Slade cycles through numerous subcultures and styles before settling on his ubiquitous glittery decadence as he transforms into Maxwell Demon, his alien alter ego. As his fame crescendos, Slade's looks seem to get more and more post-human, integrating body paint, reptilian prosthetics, and wigs. He quickly becomes a style icon and is emulated obsessively by his teenage fanatics.

In the opening credits,

The film’s protagonist, Arthur Stuart (Christian Bale), is a journalist who must reckon with his past involvement in the London music scene of the '70s as he investigates the disappearance of Slade. Having come to terms with his queerness through his adolescent idolatry of the singer, one of Arthur’s early flashbacks poignantly captures the reality of coming of age in a conservative, homophobic environment: He sneaks past his parents wearing a bulky coat, which he ditches in the bushes outside his house to reveal a flamboyant cropped T-shirt before going cruising. To piece together the musician's elusive past, he relies on the flashbacks of those close to Slade, namely his American ex-wife, Mandy.

As the (alleged) likeness of Angela Bowie, Mandy (played by Toni Collette) undergoes a style metamorphosis that reflects that of her husband in the early years of his career. Over the course of the film, she shifts from vaudevillian frills to Stevie Nicks-type caftans before she reaches her full, most colorful potential as the reigning first lady of glam. “It’s funny how beautiful people look when they’re walking out the door,” she laments, recounting her marriage's dissolution. Appropriately, Mandy’s fierce, unhinged beauty is perhaps at its most refined when she serves Slade divorce papers in a fabulous multicolor cheetah trench coat, having been pushed to her breaking point by his excessive drug use and infidelity.

Slade’s primary extramarital lover, Curt Wild (played by Ewan McGregor), represents the grimier side of the rock lifestyle, with his feral energy and a more in-your-face approach to androgyny by way of chipped black nail polish, body glitter, and smeared eyeliner. After he eventually falls out with Slade, it is revealed that Wild hooked up with a younger Arthur after a show, a formative moment in his self-discovery. Wild is both the fulcrum of the journalist's acceptance of his own queerness and also the embodiment of the subversion inherent to being loudly, openly gay in a time like the '70s. Prior to their breakup, Wild's very public affair with Slade causes a media frenzy, making him one of the most salient members of his entourage.

When Slade’s career explodes, his manager (played by Eddie Izzard) hires a curated, hedonistic group of sycophants, essentially just to hang around and look cool. “I’m not really myself except in the midst of elegant crowds,” purrs one of the women flanking the singer during an elaborate press conference. "Elegant," is a choice word here; draped in gold lamé and pearls, the group of hanger-ons is kitsch. The artful haughtiness, coupled with ridiculous fashions, evades any standards of tastefulness. The entourage is a testament to the superficiality of the subculture; any vestige of substance is veiled in absurd spectacle.

Critical reception of Velvet Goldmine was mixed, and often perplexed. CNN's review following its initial release dismissed the film as "a bunch of fey lip-smacking and film student in-jokes." A success by camp standards, the reaction to Haynes's work perpetuates Sontag's definition of the style: "Art that proposes itself seriously, but cannot be taken altogether seriously because it is 'too much.'" In its excess, Velvet Goldmine has carved out a place for itself in the cult canon of cinema for years to come.