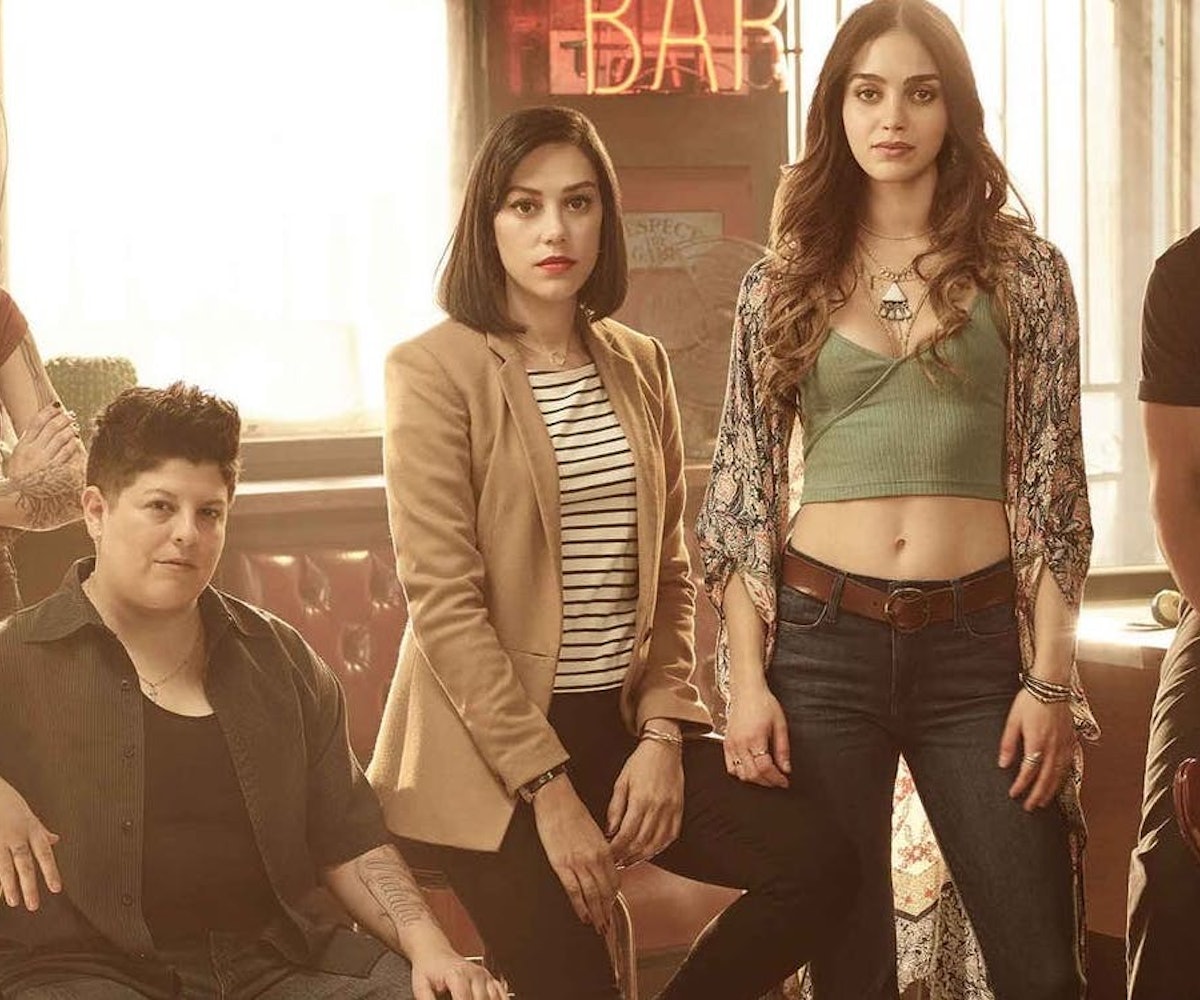 Tanya Saracho may have cut her teeth as a playwright, but she’s proven herself a formidable showrunner with STARZ’s new show, Vida.

The show follows two estranged Hernandez sisters, Emma and Lyn, who come back home to East L.A.’s Boyle Heights after their mother dies, leaving the family bar to them and her wife, Eddy. And while that makeshift family dynamic provides ample story line flexibility, Saracho also incorporated the larger question of "gentefication" into the show. "Gentefication" is the gentrification of a neighborhood by a younger generation of Latinx people who come back to open up businesses like vegan bakeries and wine bars, and it has become a hot-button topic in places like Boyle Heights. And it’s this real-world conflict for many young Mexican-Americans that Saracho and STARZ wanted to explore. On one hand, you have Emma and Lyn, who aren’t quite sure what to do with their family’s bar. On the other, you have the community response, given voice by the character of Mari, a brazen anti-gentrification activist who may be the only person unafraid to match Emma’s withering stare. As Saracho says, it's "complicated," especially since many East L.A. residents weren't too happy with the premise, to begin with.

That said, gentefication isn’t the only thing Saracho was concerned with while writing and producing the series. Representation and ensuring that key parts of the crew were Latinx was paramount so that the story itself could be told properly. After watching the first few episodes, we wanted to talk to Saracho about her writers' room, the importance of diverse cinematography, and the work that went into researching the show. Read our Q&A, below.

Most of your experience lies in playwriting. How did you end up on Starz’s radar?

Honestly, I don't know. I went into a meeting, I thought, to staff one of their shows. And then [Starz senior vice president of original programming] Marta Fernandez was like, "Have you heard the term 'gentefication'?" So we had this amazing, lively discussion about the gentrification of a Latinx space by other Latinx [people], which is fascinating. So she was like, "Can you write a pilot about that? We want to do a show around this.”

It took over two years to get here, and in those dark months, with nothing happening and you're just working on the pilot, I just kept doing the work. I didn't have a name, I didn't have [the experience of writing an entire show], but these women who popped off the page were so interesting to me. It was a joy to do the background for them [and be like,] "What would their lives look like?"

Did you choose the setting?

They pitched the setting. They wanted a show that was about a millennial woman that took place in the east side of Los Angeles. But I'd lived in Chicago for most of my life, so I had to learn quickly about the east side. I think that Starz has the finger on the pulse in lots of ways, [and all the] conversations with them were just really educated. I didn't have to be a cultural ambassador at all. In other places, I've had to be the cultural ambassador and explain why this is important, and here I didn't need to do it. I mean, with a name like Marta Fernandez, I didn’t have to—so I think all of it aligned to bring us here.

How much of the current conversation surrounding gentrification influenced your writing for the show? Did you talk and consult with activists while writing?

Oh yes. We have a community consultant—a liaison. She connected us with housing organizations and she connected us with people who had been not happy that we exist as a TV show. We thought that was important to talk to them, and be like, “Oh, that [concern] makes sense. You're right, we are a little gentrifying ourselves." All this informed so much of what you see, especially sourcing Mari because she is that youth culture activism that's happening right now.

What exactly were the community’s concerns?

We did a pilot presentation in the summer, and we shot two days in Boyle Heights, and the community was not happy that we were there. We were writing about them without them. Because I am not from the east side, there was also a big reaction online. They called me "Whitina," they called me "coconut." I had never heard "Whitina," so I put it in the show. I was like, “That's right!” ...But respect, because they have a point. So we were very strategic about how and when we shot in the east side [so we wouldn’t get in the way].

We talked to so many people. And I have a couple of writers who are from the east side, and who have felt like gentefiers... So those conversations, we're living them in [real time]. But yes, we talked to a bunch of people and we read everything that's happening. There's a bunch of protests happening right now, all the time. So we really kept abreast of that. [But in the gentefication conversation, a] lot of these places are owned by Latinx people, so just the conversation is so not black and white—and that's a great reason to build a show, right? The two sisters are the embodiment of gentefication if they do anything different to the bar and it attracts a certain clientele. I'm excited to be exploring the theme, but never didactically.

Did you draw upon any of your own personal experience while writing the show?

The main characters all have something of me in them, so I can't say that they didn't! Emma's queerness is me. My 20s is Lyn now—I was a mess in my 20s. Eddy has a big heart and a willingness to compromise that I used to have... I didn't know that being a showrunner, you're the last “yes” or “no.” I was like, "Oh my gosh, you have to be really decisive.” Leading this motley crew was so many lessons.

Speaking of production, tell me about the crew you hired.

The cast is all Latinx, all the season regulars. My entire writers' room is Latinx, and it's mostly queer women. There's only one man, and the rest are women. I don’t think that you can build an intimate, detailed show like this one without a room [filled with people who know] what the theme and the content of the show is. That was really important to me. All of my department heads are women, my cinematographer is an Afro-Latina, and I think that is of the utmost importance because she understands our skin colors, our tones, and our brown skin. She knows how to bring out our olives, all of it. Oftentimes I see us on TV, and we're either blue-washed or even brown-faced—like when they saturate us too much. But I wanted us to look cinematic. I wanted our skin tones treated with respect.

Vida premieres May 6 on STARZ.