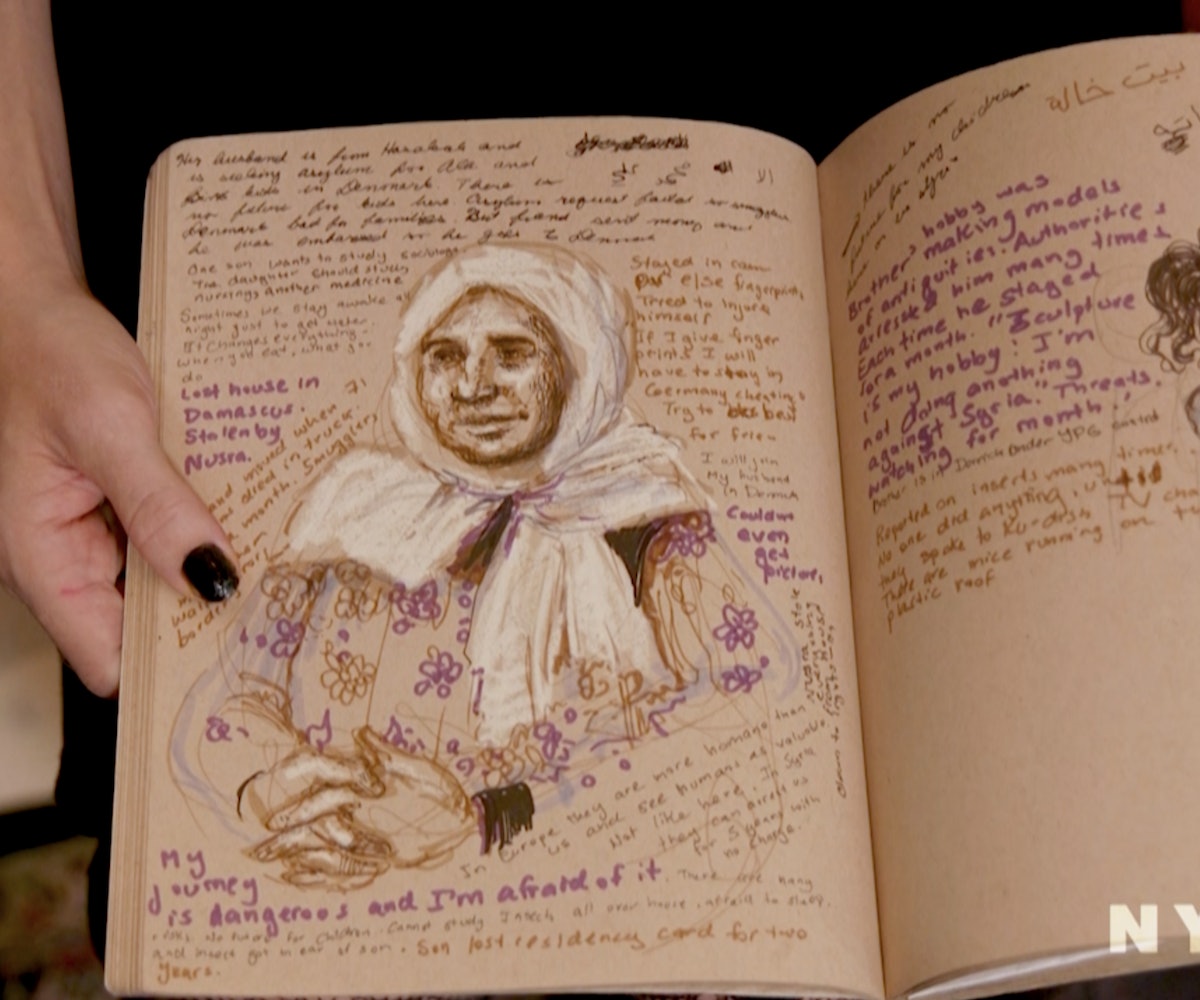 "You're just room meat," artist and writer Molly Crabapple tells me, explaining why she doesn't like to go to art openings. "Most openings, you don’t go for the art, you just go to be seen there. That’s all it is."

We're talking about the commodification of art and, really, the commodification of the artist, and how Crabapple specifically avoids that as best she can. Despite "never really relating to the art world," Crabapple has built a successful, fascinating creative career—one totally on her own terms. Having first gained wide notice for her art and journalism work during the Occupy movement in 2011, Crabapple has now covered everything from the trial of Martin Shkreli to political upheaval in Turkey, has been published in esteemed media outlets, and released a powerful memoir, Drawing Blood, in 2015. All of her work reveals how intimately intertwined Crabapple's politics are with her creations, and she has gone everywhere from Syria and Palestine to Guantanamo and, most recently, Puerto Rico, where she has been highly involved following the destructive advent of Hurricane Maria. Her art challenges the viewer and reader to rethink the way they view the world and their place in it.

You can watch as Crabapple takes us through her studio and talks about her career path and, below, read our conversation about the devastation in Puerto Rico, the problems with Democrats, and how George W. Bush ushered in the Trump era.

I would love to talk about your recent work in Puerto Rico, following the devastating hurricane. One of the most troubling things is there’s this othering of the Puerto Rican people as if they’re not a part of America.

It’s so galling. The Puerto Ricans pay taxes—it’s their tax money, too! At best, I feel like a lot of the American thing is, like, “Oh, it’s charity,” as opposed to, “People want the services that they paid money to their government for.” Only one-tenth of schools in Puerto Rico are open a month after the hurricane. Ninety percent of the schools are closed, and children have missed a month of school, and this is just not something of urgency. The lack of electricity means that there’s no refrigeration, which means that people don’t have fresh meat or milk or these very basic things... It’s so gross.

The language is so different than what existed in the national conversation about Houston after Hurricane Harvey.

It’s so gross. I have to say, New Yorkers are being really good. But I think that’s because there are so many Puerto Ricans in New York—it’s harder to other people here. It’s so disgusting, and there’s so much corruption. For instance, all these people [in New York] raised physical donations, do you remember, early on, and they brought them to the firehouses?

It’s just in FEMA and military warehouses... it’s not even government aid, it’s private aid that they basically stole, you know? I really think that if people want to do aid now, you have to do something where you’re bringing it down yourself, and that’s totally something that can be done. Or mailing it, too. Did you know mail delivery got to this town before FEMA did?

I think for some people, they have a hard time engaging with problems that exist outside of their immediate frame of reference. How do you work to be aware and active on issues that exist on a global level?

I think that if you’re a politically active person, but you’re dealing with issues that are very far from what you know about, sometimes it’s very easy not to understand the full context, so because of that, I don’t think it’s wrong to start on the basis of your own issues and oppression at all. Anyone should be very happy to do that.

I traveled a lot, I liked traveling, I liked having friends from around the world, I’m a more international person. But I don’t think that it’s wrong if people focus all of their efforts on the problems of their own communities.

Totally. It's so important for many people actually to be thinking locally that way. Sometimes, I can feel a little bit cynical about people who...

Who are super, super privileged.

Yeah, and who are now suddenly activists because they’re like, “Well now this might actually affect me where nothing affected me before.” Or the people who might hate Trump, but are now participating in this strange, grotesque rehabilitation of George W. Bush.

Yeah, what the fuck is that?! Where they’re like, “Well, he may have murdered hundreds of thousands of Muslims, but he didn’t say bad things!” He destroyed the Middle East! And Katrina! And I actually can’t think of a single good thing Bush did, at all.

I mean, there’s nothing. He was maybe a good dog owner? I don’t know.

I get really really disgusted by people who are now just kind of like, “Well you know, he didn’t actively court Nazis,” and I’m like, “Well actually, he kind of did.”

Yeah with the whole McCain thing.

Also, the other thing was, he was the one who opened up the idea in America that you could be a fucking idiot and run for president. He was our first fucking idiot.

John McCain, too, who ran with Sarah Palin, speaking of fucking idiots.

Exactly, he pried open the gate yet wider, on the fucking idiot gates.

There was recently some Democratic fundraiser or something in California, and I do think it was Nancy Pelosi who said something like, “Don’t we all wish Mitt Romney were president?”

What is wrong with Democrats is just a huge question?

Yeah, they just want to maintain their exact same level of power and their hyper-capitalist society that they’ve benefited from enormously, and so many other people are suffering under who are their constituents and who they take for granted. It’s so frustrating.

And it’s true, on one hand, I’m like, okay, at whatever point you start being politically cognizant, at whatever point you want to start protesting, taking action, good. Welcome. Nobody should ever be shamed, and be like, "Why weren’t you doing it before?" But on the other hand, these people who apparently had no problems with anything before, like the deportations or the mass incarceration...

I think that’s actually like what we’re seeing in Puerto Rico, really—how people are affected when nobody cares about them. What happens to people who are already marginalized within this system, but who pay taxes; who are citizens, but who don’t actually have all the rights of citizens. They’re who are going to get affected, and those people aren’t just in Puerto Rico, they’re in the 50 states, too.

I’m really worried about our world. This is the thing that I’m always ranting about, the sort of mass movement of people that happened in 2015 is not an anomaly. Once climate change really starts putting parts of Bangladesh under water, like, this movement is going to become exponentially greater. And if states don’t figure out how to give people human rights who don’t have the right passports, the alternative is going to be shooting people and concentration camps, and that’s already what they’re doing with people in some places. And I don’t think that the world is going to the no-borders utopia. I think that what climate change is going to lead to is serious fascism.