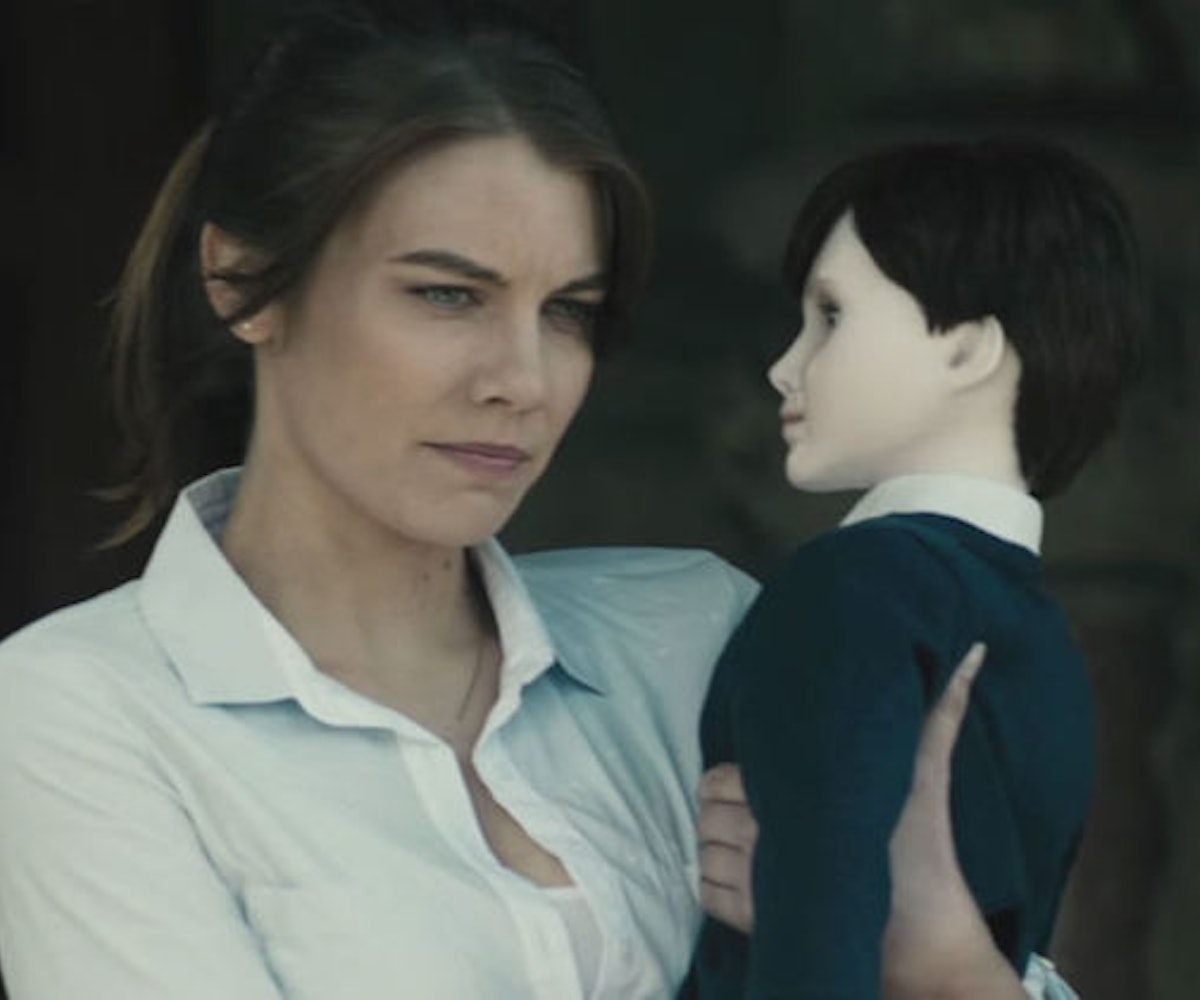 At this point we are very, very used to seeing The Walking Dead’s Lauren Cohan coated in blood and running from crowds of decomposing, undead, cannibalistic ghouls. It’s her average Sunday night (and ours!). What goes down in her new horror flick, The Boy, however, is just a bit off-center from all that.

First off, Cohan’s main co-star in the understated horror film is a tiny, somewhat creepy doll called “Brahms” who may or not be alive. Let that massive narrative leap sink in for a moment.

Yeah, we thought it was silly as hell, too, until we saw last act of the movie and were fully and truly shocked by what happened. Yes, you could look at a lot of The Boy as absurd—and it is—until it unspools and then you have quite a scary, sharp thing in your hands that is terrifying in a way completely different than The Walking Dead.

We talked to Cohan about the differences, her inanimate co-star, and what every TWD has been buzzing about, her hair.

I saw the movie last night and it was really fun. This is an unusual script with a rather large…leap...at the beginning. What made you say yes to this one?

The leap, I think. The leap, and we obviously have a couple of really good twists at the end. I read it and felt very spooked and very creeped out by it and just thought, 'I don’t know if my sanity should do this right now,’ and then I thought, ‘That’s why I should do it.’ It seemed really fun and a really fun twist, and good from a character perspective and good to do something that would give people those jump scares.

You’re only really acting against, what, four people the whole time? What was that like for you?

It was good! It was definitely challenging working with the doll because he’s inanimate, but as we progressed through it, it’s amazing—the pretend bond that you have that comes to feel like a real responsibility and a real bond. He had a lot of energy from the crew and from me and from everyone. We had a really good time doing it and it was definitely...it needed a lot of quiet to concentrate on this relationship with the doll. Does that make sense?

Sets are funny places. Can you think of anything particularly silly that happened with the doll on set?

Yeah…I sort of went off a couple of times on little riffs with him about changing his nappy and feeding him and his food preferences and just sort of had some fun with him there. But he’s not the biggest jokester, so I wasn’t getting a whole lot back.

Speaking of creepy, I assume you’re going to keep a Brahms doll.

Where are you going to keep him in your place? Like a steel box?

Yeah, maybe in the trunk? Just kidding (laughs). Yes…I don’t know that. I don’t keep a lot of stuff around. I think the office. I think the office is probably the funniest place to keep it. Just like, in a little corner. Maybe his own shelf. An alcove.

There’s something old-fashioned about this movie, in its scale and stuff like that. It’s very different from “The Walking Dead.” What other works were you channeling for it? What did you watch to prepare?

I found that this was a lot like The Others. I loved the way The Others had this sort of elegant, really peaceful…it was a beautiful film. Obviously so much of this I didn’t know until watching the film after—I just thought the scenery looked so incredibly rich and we really got to drink up the houses. And even the boy himself, for the costumes and the whole tapestry of the film. But it was different from The Walking Dead for me just in so many ways. Obviously they're both horror genre, essentially. But this was really a game of the mind, as opposed to a physical threat. The parts of this film that I loved doing the most were the bits where you were like, ‘You’d never go in there. Why are you going upstairs? Why? This is a bad idea!’ Because this is what I enjoy yelling at my screen when I watch a horror film. Just like, everybody knows you shouldn’t do this.

How would your character, Greta, fare in the zombie apocalypse?

I think she’s do pretty well, actually! I think the only thing missing for her in this situation is people that she can rely on and strategize with, and I think that’s a big part of her unraveling in this film, that she’s alone. I think that she has the guts, she just needs a bit of fortification.

Naturally, you’re on one of the biggest shows on television and it’s over analyzed almost to death. What’s it like dealing with the absurdity of even your hair choices becoming spoiler conversations?

I know, it’s so funny. Again, it’s the theme of my work life—without giving too much away—I knew that this was going to prompt some conversation, and the reasons behind this, everyone involved in the reasons behind my hair being cut, knew this, as well. We just of have to bite the bullet and go forth and smile and nod and wink and not say anything.

Speaking of spoilers, tell me everyone who dies and what order they die in.

Right? I know. We have a pretty testing second half of the season, I will say that. The most testing we have ever had.

The Boy is playing in theaters now and The Walking Dead returns February, 14 (Valentine’s Day!)