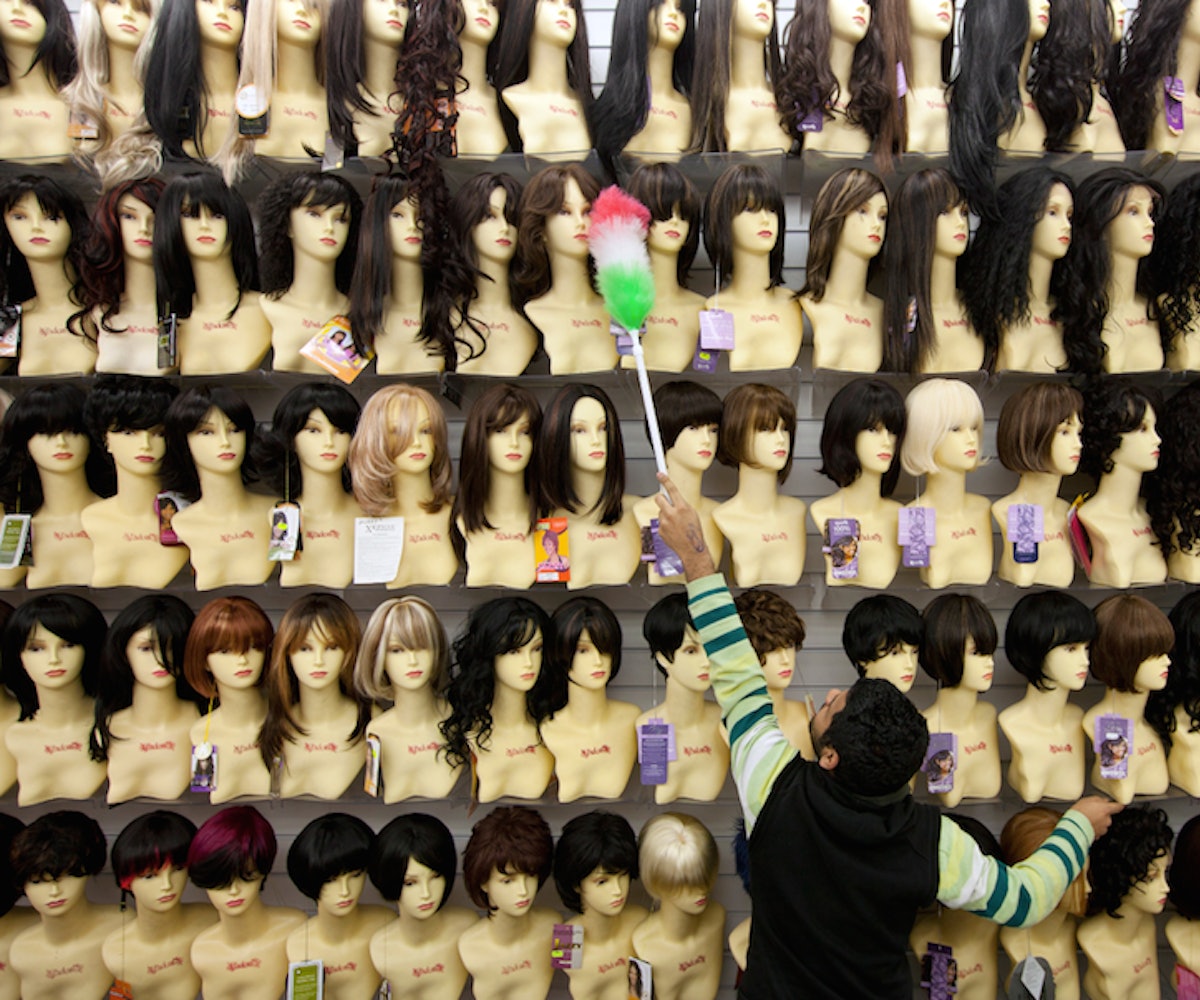 There are three thinning spots crowning my head, the hair so fine that I can feel the chill of my index finger against my scalp with a single tap. I conceal them with a side part, but behind closed doors, I desperately try to revitalize them. I swallow biotin and turmeric pills. I nudged my dermatologist for an acne medication that stimulates hair follicles. I eat apples, carrots, whole grains, and other things horses like. I use light shampoos. I mask my hair in coconut oil and cushion it with microfiber towels and braid it with tense fingers. I sleep on satin pillowcases. Little improves. I know there’s a problem not yet unearthed.

I wear this hair as is, but on days I want more “bounce” on my head or a protective style from the cold, I turn to my growing wig collection. Many are just fuller, healthier-looking versions of my natural brown curls. Others indulge more extravagant styles of my fantasies, like the ass-length ornament of silver barrel curls and black bangs that I found at a beauty shop last summer. I’m a woman of black, Arab, and Native American descent. My aunt made my very first wig as a graduation gift. I remember trimming the lace, fitting it properly, and falling in love with my face framed in thick, dark tresses.

Wigs afford me the confidence I’ve lost watching wads of my real hair swirl down the shower drain, but people don’t often know how to react to them. I once told a friend that my hair in a pretty Facebook photo was actually my newest purchase; he replied, “You aren’t supposed to tell me that!” Another time, an older colleague complimented my unusually weighted curls, then stood in amazement with her mouth half-open, the way people do when they want you to drop the words into their mouths. “Oh—it’s a wig,” I finally contributed. She quickly leaned in, and, giggling, whispered, “Okay, okay!” as if I’d divulged a horrifying secret. I twisted my embarrassment into a smile.

I’ve learned that my wigs don’t elicit the same approval as do other beauty enhancers like makeup or shapewear. In some hair forums, female wig-wearers spill into garrulous panic. Have they disqualified themselves from love if their suitor finds a wig cap in their purse? Should they out their hairpiece in a footnote on their dating profile? Abandon the wig altogether? Enter the dating pool with puritanical veracity? Their anxieties aren’t unfounded, they're just the consequence of the wig stigma.

It isn’t news that our society idolizes Eurocentric beauty standards. Hair is most admirable when it’s full, manageable, and naturally grown—particularly from a white woman’s head. This hair has long been a notable way for white women to perform femininity in our society. Performing femininity earns male praise (and isn’t that what we’re here for?). Further, such hair is one of many visual markers by which white womanhood is identified and distanced from black womanhood—which is perceived as inherently lesser than. Therefore, these Eurocentric beauty standards uphold both patriarchy and white supremacy, leaving non-white women particularly vulnerable at their intersection. Given society’s lust for white beauty principles, manufactured hair is (wrongly) viewed as a cheapened, a somehow unearned femininity. My well-meaning white colleague’s actions demonstrate the pervasiveness of this notion: By rushing to re-privatize my admission, she revealed how damaging my wig wearing is to the ideals of traditional white womanhood, which I, a woman of color, should be striving to achieve.

I doubt she considered that I belong to a culture that very comfortably embraces this hair. Wigs are in no way alien to black fashion. Whether worn out of personal affinity, convenience, and/or compliance with inequitable, racist dress codes, among other reasons, they’re a staple to many a black woman’s beauty routine. Only when I’m confronted with bizarre, misguided policing in the name of white beauty standards do I feel ashamed to wear one. At my most vulnerable, I’ve convinced myself that I can quietly continue doing so as long as I don’t love myself in it. I’m not entitled to my beauty and confidence unless I’m prepared to pin a disclaimer to it.

I pair morning walks to work with self-conscious prodding. Everyone on this sidewalk has suspended their existential panic about President-elect Donald Trump to figure out if that’s your real hairline. Maybe the strangers I talk to are challenging my wig’s authenticity as we speak. Maybe a tress will get snarled in my coat zipper and tug off the whole thing, or they’ll ask what products I use to control my curls (wig shampoos are milder). I try to beat them to the punch, whether or not they know there’s a punch. I blurt, "This is actually a wig." Yep, the cornerstone of my femininity is store-bought. They say, "oh," in a tone that drops off into nowhere. Maybe I don’t care to tell them about my wig in the first place, but I force it anyway. I tattle on myself because I’m afraid of being seen as a liar.

I recently wore my curliest wig to a concert in New York City. Under the red-pigmented lights in a large room, I still managed to fuss about its appearance. A person in front of me peered over their shoulder between sets, their gaze fixed on my curls, which were swelling in the heat. Finally, they wheeled around. “I can’t stop looking at your hair. It’s amazing.”

Startled by their friendliness, I managed to thank them, and then added, “It’s a wig, actually,” pursing my stupid lips.

Without a moment’s pause, they replied, “I don’t care what it is—you look fantastic.”

There was no disappointment in their tone. I hadn’t let them down, though I did feel silly for wedging my admission into our warm interaction. I hadn’t felt like telling them, so what spurred me?

Their sentiment was the simplest ever, yet struck me as if for the first time: It doesn’t matter. My wigs are tools of self-empowerment, not to be disavowed at the first innocent compliment to satisfy patriarchy and the white feminine ideals that emerged from it.

So, society, maybe we both have to work on this?

I get that unlearning my impulsivity is a nonlinear process. At my upcoming company holiday party, someone will acknowledge my silver curls, and, right on cue, I’ll aggressively volunteer, "Thanks! It’s a wig." That’s just how I’ve been conditioned to respond. I’m working towards the habit of acknowledging my wigs out of genuine candidness, on my own terms. In the meantime, I hope you have the tolerance to be comfortable with whatever I blurt. I hope that you resist the urge to usher the words back into my mouth. When I try to disown my beauty for the thousandth time, I hope you can piece me together with the reminder that it’s a wig, but it doesn’t matter.