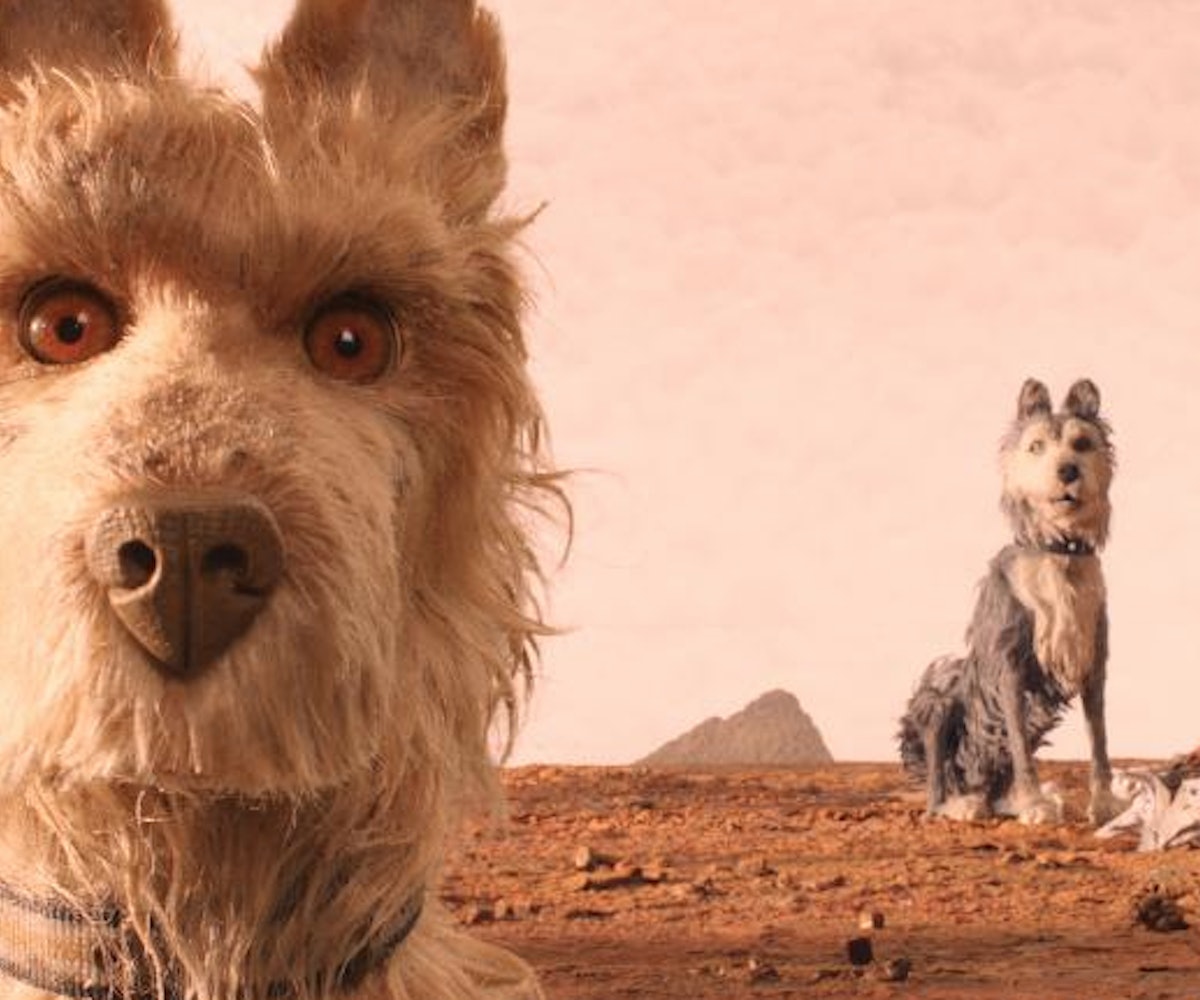 Of course, Wes Anderson is a dog person: Think of the scrappy, playful violence, with surprisingly deep bite marks, in Grand Budapest Hotel; or of Royal, Uzi, and Ari Tenenbaum hanging off the side of a garbage truck, feeling the wind on their dumb happy faces. Owen Wilson is such a sad-eyed stray puppy in that movie, as is Jason Schwartzman in Rushmore—they’re hyperactive, parentless runts, lashing out or quivering with need, desperate to join a family.

The most significant emotion bond in all Anderson films is between wayward boys and whoever will pet them—or allow themselves to be petted. Sometimes, overgrown adolescents like Royal Tenenbaum or Steve Zissou manage to reunite fractured families late in life by belatedly discovering the joys to be found in attending to the needs of others, like boys whose job it is to walk and feed the family dog. But in his last three films, Anderson’s given us actual peach-fuzzed orphans: Moonrise Kingdom’s Sam, Grand Budapest Hotel’s Zero, and now, in the stop-motion Isle of Dogs, Atari Kobayashi (voiced by Koyu Rankin), who pilots a stolen aircraft to Trash Island, where all Japan’s dogs have been quarantined, in the hopes of reuniting, like in a reverse Homeward Bound, with his beloved Spots.

Even more so than any previous Wes Anderson film, Isle of Dogs is concerned with the concept of goodness. Who’s a good boy? Who’s a good dog? These are the weighty ethical questions with which the film grapples, as Atari and a wild pack of family dogs traverse Trash Island. In particular, Atari and Chief (voiced by Bryan Cranston), a street dog prone to Royal Tenenbaum-esque bursts of exhilarating, alienating wildness, co-evolve over the course of the film, like caveman and wolf. Atari grooms Chief, shampoos his hair, reinforces his good behavior with treats, and Chief plays fetch with the boy, and snarls at threats to him.

Their mutual character development is the moral core of a film which follows the recently political direction of Anderson’s work: The dogs of Megasaki have been afflicted by Snout Fever and banished to Trash Island by Mayor Kobayashi, scion of a dynastic family of industrialist rulers prone to suspiciously undemocratic elections and assassinations. The cat-fancying Kobayashi has scapegoated Megasaki’s dogs as a ploy to consolidate his power; the place of their banishment is an ecological disaster zone representing decades of wasteful industrial capitalism and animal testing—and the dog deportation is, we eventually learn, prelude to a final solution. But, as the citizens of Megasaki follow the story of the runaway Atari, who is also the ward of the mayor, and his lost dog, a social justice movement develops.

Chairman Mao famously spoke out against “the imperialists and their running dogs,” but in Isle of Dogs—and in contrast to the betrayed promise of Mao’s Chinese Revolution—the canines represent an authentic populist socialist ethos, one whose scratchings at the kitchen door of history have only grown more urgent in these ominous times. “From each according to his ability, to each according to his needs” isn’t just a way of conceptualizing the bonds of brotherly love and selflessness that tie a dog to the child who fills his bowl: It’s also a quote by Karl Marx.

In Isle of Dogs, as in life, cats represent the aloof, the self-interested, and the unaccountable. In contrast to the authoritarian capitalist Kobayashi, though, the dogs are pack animals. Rex, King, Boss, and Duke (Ed Norton, Bob Balaban, Bill Murray, and Jeff Goldblum) vote on everything, even if the process is frequently, comically belabored, like the General Assemblies at Occupy Wall Street.

These dogs are proletariats, unlike the fat cat Kobayashi. They have jobs: They are baseball mascots, dog-food commercial actors, or guard dogs. Nutmeg (Scarlett Johansson) is a show dog, but, she says, that doesn’t define her—a nod to the estrangement of labor from the commodities it produces, as seminally identified by Marx in the Economic and Philosophical Manuscripts of 1844. The trek across Trash Island takes Rex, King, Boss, and Duke through frightening abandoned factories suggesting the impending obsolescence of unskilled workers; and, they and Chief fight packs of robotic dogs developed by Kobayashi’s scientists. (Isle of Dogs is appropriately skeptical of the benefits automation will have for the many, so long as it’s still controlled by the few.) When Chief joins his fellows in the fight, it’s an important moment for him as for all union members: a realization that he can show solidarity without sacrificing his independence.

Dogs, unlike cats, require exercise, and, in Isle of Dogs, democracy is vitiated through direct action. Kobayashi holds sway over the citizens of Megasaki through mass rallies, broadcast on state television with the illusion of extra time given to his token opposition; the dog lovers use as an organ the alternative press. Print media in the form of a student newspaper remains a vital bulwark of resistance, particularly the articles of American exchange student Tracy Walker (Greta Gerwig). Like Atari, she has been taken in by a family not her own, and when Kobayashi threatens to revoke her visa, it’s the natural extension of an individualistic society which has already turned its back on the unfortunates massing just off its shores. The student activists disrupt speeches and hold up pictures of their dogs—Tracy’s sign for her beloved Nutmeg, which she forces into the frame whenever a camera is nearby, is a pointed echo of the #SayHerName campaign, leveraging the recognition of individual causes into mass mobilization and an awareness of the plight of all such victims of state violence. (Again, the bourgeois cat finds itself on the wrong side of history: Why bother to Say the Name of something that doesn’t come when you call?)

In the spirit of self-criticism, some issues with Isle of Dogs must be acknowledged: In its references to Hokusai, haiku, sumo wrestling, and on and on and on, the film sometimes seems to be filling in every square of a Japanese bingo card. And the prominence of the American Tracy in the resistance, at the expense of her unsubtitled-Japanese-speaking schoolmates, furthers the impression of a gawking tourism edging into appropriation. So, in the tradition of Castro and so many others, it at times champions an overly masculine movement with a compromised relationship to out-groups. To stamp out these reactionary tendencies, some re-education is required—perhaps a rolled-up newspaper to the nose? Only then can we achieve a fully intersectional praxis. Remember: All dogs go the workers’ paradise.