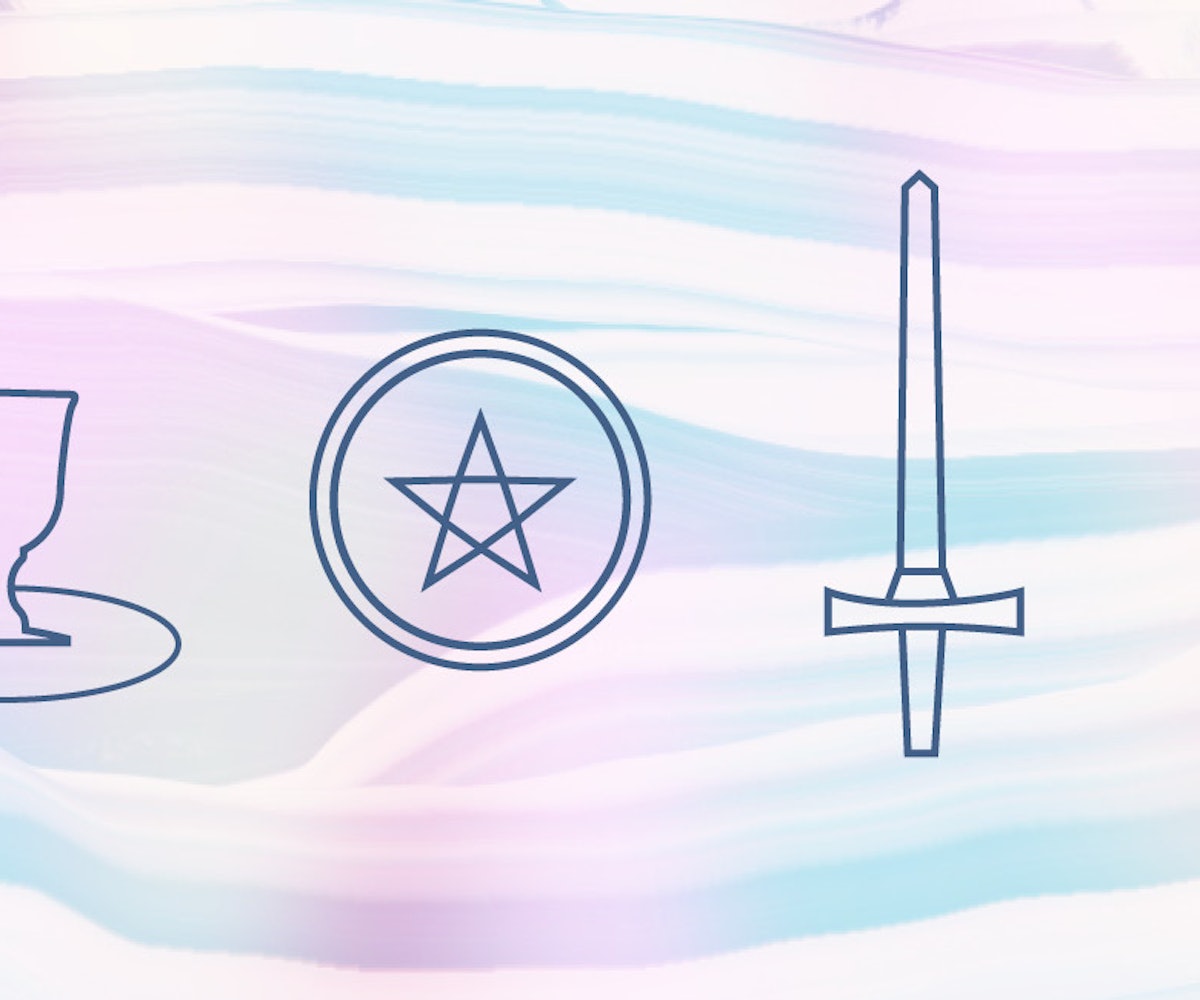 For those who have been waiting, this the follow-up guide to the Major Arcana and Zodiac. Unlike the Major Arcana, there are no singular cards that are attributed to one sign. Rather, the elements of the zodiac are divided amongst the suites of the Tarot. Despite the generality, understanding the corresponding attributes between certain signs and the Minor Arcana can be extremely helpful when receiving a Tarot reading or offering a Tarot reading to others. Just like certain Scorpios will always find the Death card in their Tarot reading and certain Geminis will often find the Lovers showing up, it’s common to experience an abundance of cards from a certain suite in your reading that correspond to your zodiac element. Because when we receive Tarot reading, we use all the cards, and because each of us has a natal chart that reflects the whole zodiac, I encourage you to read each section and keep this information in mind next time you do a reading. Our current systems of divination are ancient and inextricably linked and, just like the elements, they wouldn’t exist without one another.

The water signs of the zodiac are Pisces, Cancer, and Scorpio. In the Minor Arcana, these signs are represented by the suite of Cups. There are 14 cards in each suite which, in this case, run from the Two of Cups to the Ten of Cups, have four face cards, and one ace. The face cards are traditionally represented as a Page, Knight, Queen, and King (although many contemporary decks will vary their interpretation and naming to include non-binary and non-colonial representations). And, it is these cards Tarot readers often interpret as a person in the querent’s life. For instance, it’s not unusual to have the appearance of a Queen of Cups signify a Pisces, Cancer, or Scorpio woman who is integral to the reading in some way. The suite of Cups is associated with the qualities most often attributed to water signs, such as emotional receptivity, relational fluidity, intuition, and psychic ability. These qualities lend an emotional depth and perception to experiences of grief, friendship, heartache, and erotic connection. For example, the Three of Cups in a reading will signify strong friendship, building of community, creative collaboration, and reciprocity from those in your chosen circle. On the other hand, the Five of Cups in a reading signifies a person who is full of regret, someone in mourning, someone who can’t perceive the blessings and offering before them because their vision is obscured by the ghost of what feels lost and irretrievable. It is also often the case that water sign dominants tend to find a lot more Cups in their Tarot reading than the other signs—although this is less of a rule and more of an affirmation—since water signs are often drawn toward emotional labor and psychic development. Of note is the correlation between the Tarots’ suite of Cups and a playing card deck’s suite of Hearts (the symbolism is not lost here)—it is said that playing cards are derived from the Tarot and, as such, can be used, in a pinch, for divination in much the same way.

The fire signs of the zodiac are Aries, Leo, and Sagittarius. These signs are associated with the Wands (or Rods) of the Tarot. The element of fire is linked to inspiration and generative creativity, primal energy and ambition, passion and sexuality, and, as such, the suite of Wands represents much of the same themes of creative drive in one’s daily life. For example, the Six of Wands in a Tarot reading is likely an indication that the querent has had recent success in their endeavors and achieved some sort of recognition or reward for their efforts. It is a card that validates the seeker’s creative pursuits and encourages them to further harness their ambitions. The Ten of Wands, on the other hand, may indicate someone who has taken on too much responsibility and, at this point of their venture, must decide what is vital toward their thriving and what must be shed or delegated to others in their community/team. Because face cards are often associated with people in a querent’s life or the querent themselves, when the King of Wands appears in a Tarot reading, he is said to represent an authoritative (king) fire sign (Wands) in the querent’s life. In a deck of cards, the Wands are represented by the suite of Clubs.

In the Tarot, the suite of Pentacles (or Coins) is associated with the Earth signs of the zodiac: Taurus, Virgo, and Capricorn. These signs represent qualities of groundedness, sensuality, fortitude, service, and material manifestation. In the corresponding suite of Pentacles, these qualities are much the same, and the cards take on the different aspects of building and sustaining one’s environment—especially in relation to wealth, physical health, realization of plans, and foundation building. The suit of Pentacles deals of Earthly matters, that which grounds us, supports us, and keeps us afloat. And, because the Tarot is a tool for both divination and reflection, these cards can point us to the places within ourselves where we stand to grow. Take, for instance, the Four of Pentacles. This card will often indicate a person stable in their position, a person who feels that they have secured a respectable reputation and acquired an admirable skill set. In a way, this card is validating and reassuring. And, yet, finding this card in a reading can also indicate a person who put too much weight on material matters and exists within a model of scarcity—afraid to venture beyond their comfort zone for fear of destabilization or failure. For this person, their need for security might get in the way of their ability to experience the manifold sensualities of an expansive approach to life. As with the other elements and suites, a face card featuring the suite of Pentacles, such as the Page of Pentacles, often indicates a Virgo, Taurus, or Capricorn in the life of the querent. In a playing card deck, one can use the suite of Diamonds as a representative for the suite of Pentacles.

The air signs of the zodiac are Gemini, Libra, and Aquarius; they correspond with the suite of Swords in the Tarot, which is also the suite of Spades in a deck of regular playing cards. Air signs are known for their skilled communication, commitment to learning, transmission of ideas and information, community building through common interest and visions, the keeping and carrying of stories. In the Tarot, these qualities and themes manifest in the querent’s ability to uphold contracts, settle disputes, stay meditatively present, use reflection as a tool toward growth, correctly perceive and respond to their social circumstances. The Swords suite can be particularly challenging in any reading. For instance, the Three of Swords signals a possible betrayal or separation. The Three of Swords is a consequence card and, like other cards in the suite of Swords, serves as learning opportunity. The querent can use the Three of Swords as a meditation on loss and what is and isn’t inevitable. The question is posed: If we expect to suffer, do we suffer less? Similarly, the Nine of Swords is a card that indicates depression, anxiety, and angst. It is depicted as nine swords mounted behind a weeping figure in bed who cannot rest. The card asks the seeker to recognize the swords as decorative, mounted, and in possession of the figure. They are symbolic objects which no longer pose an active threat. Rather, the figure weeps at their symbolism and the fact of their being. The card asks the querent to recognize in what ways we create our own realities by attaching ourselves to stories of what could be rather than what is. The Swords suite seeks to understand rather than react, much like Aquarius, it is the wind that carries the wave from shore to shore. In a Tarot reading, a face card from the suite of Swords is often indicative of a Libra, Gemini, or Aquarius in the querent’s life.