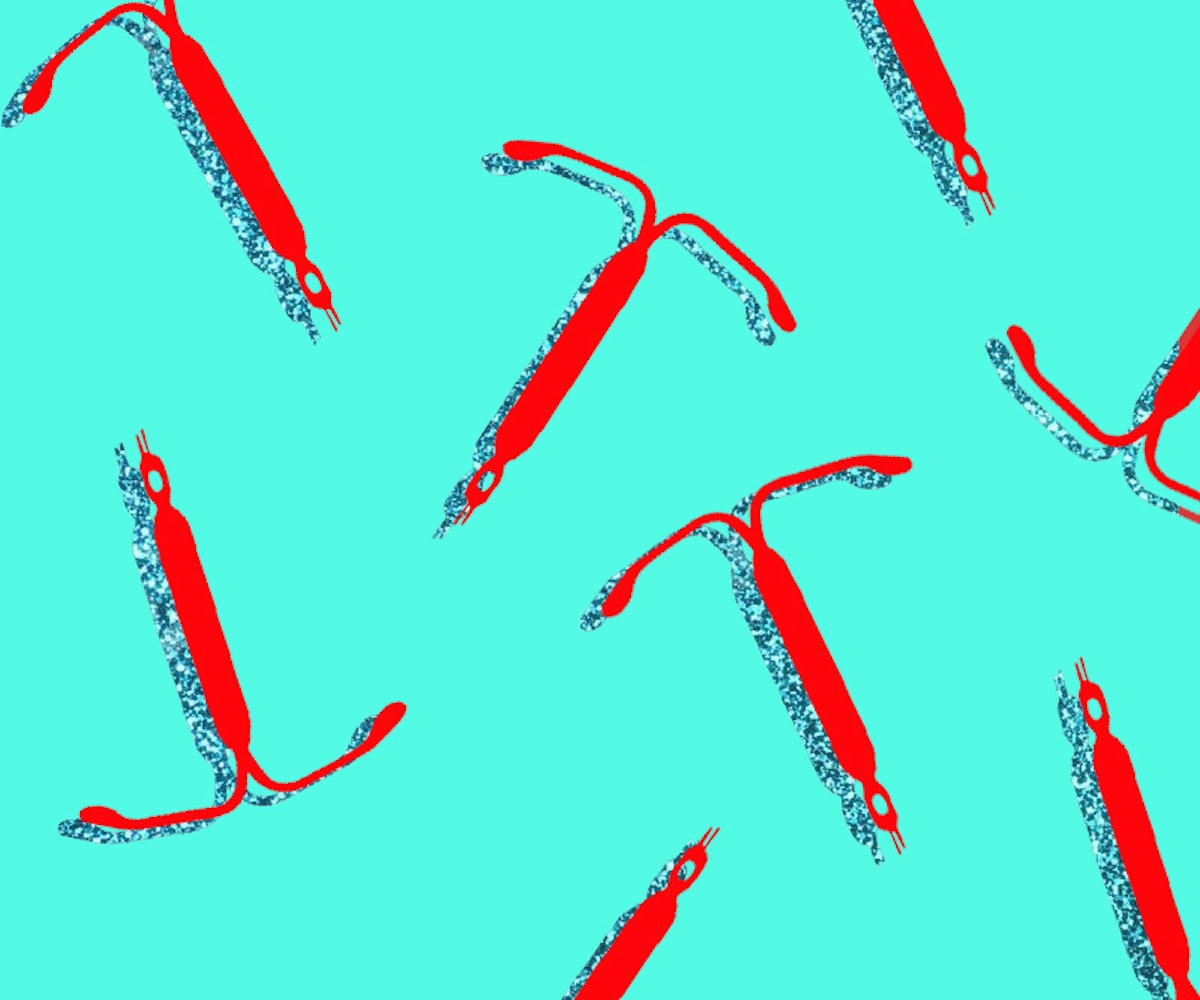 IUDs are a lot like CrossFit: if you've got a friend with one, you've probably heard all about it. But there’s more to those three letters than most people want to talk about—so I will.

IUDs stand for Intrauterine Devices—that’s medical lingo for "in your uterus," which is right where it’s going. IUDs can come with or without hormones; it’s all about personal preference. “Women often choose the copper [non-hormonal] IUD because they want to avoid hormones, although there is nothing wrong with hormones,” says Jeffrey F. Peipert, MD, Ph.D., professor and chair of the Indiana University School of Medicine Department of Obstetrics & Gynecology. “The copper IUD is approved for 10 years of use, but it can be removed at any time. Periods are typically regular in timing with the copper IUD, but some women do bleed heavier.” If you experience a heavier flow or painful cramping on a regular basis with your period, a hormonal IUD might be your best bet. “Women choose the hormonal IUD for its non-contraceptive health benefits. They reduce menstrual bleeding and decrease cramping. Periods are typically lighter or irregular with the hormonal IUD,” says Dr. Peipert.

I’ve been described in passing as a “hurricane of a person;” I’m useless at remembering anything. I mean, I’ve even managed to forget to shave my armpits for the past month (I’m not even trying to make a political statement), so the idea of me balancing my future health on my responsibility and planning capabilities is laughable. About two and a half years ago, I went to my trusty little clinic in Bushwick in Brooklyn, New York, to talk with my doctor. I knew I wasn’t interested in pills, but all of the shots and implants sounded too invasive for my liking too. When she introduced me to IUD, I knew I had found the one for me; the hormonal IUD sounded like the best BOGO deal I had ever heard of. Between not having to worry about re-upping for five years and having no more periods, as well as a speedy recovery, I was ready to dive in. Less than a week later, I was spread-eagle on top of an exam table in a paper skirt.

As for what to expect when you’re expecting an IUD: You’ll want to take some over-the-counter pain medicine before you head to your doctor. Sure the procedure itself will take less than five minutes, but once they pop that little baby blaster in, your cervix will start to wonder what’s going on and try its damnedest to push it out with some severe cramping that feels pretty much like contractions. Dr. Peipert confirms: “This is normal and common. This should not raise concern. Ibuprofen or other NSAIDs [non-steroidal anti-inflammatory drugs] may help. Women experiencing severe pain, fever, or other symptoms should consult with their doctor, though.” So, just sit back, relax, and bask in the joys of having a uterus. If you went with the Mirena, like I did, then these will be your last cramps for years to come. I mean, I don’t even remember what cramps feel like. Okay, I’ll stop bragging. Once you’re done at the doctor, you’re going to want to Uber home, FaceTime your best friend, and binge-watch America’s Next Top Model like you deserve.

Sure the first few days after insertion will look a lot like that hallway scene from The Shining, but as time goes on, the spotting will become less and less until you’re a period-less kween who can wear all the white that you want (just in time for summer, too). “This typically lasts for days or weeks; it is highly variable,” says Dr. Peipert. In the meantime, you can just let that super pack of pregnancy tests from Costco expire, and start telling all your girlfriends what they’re missing out on.