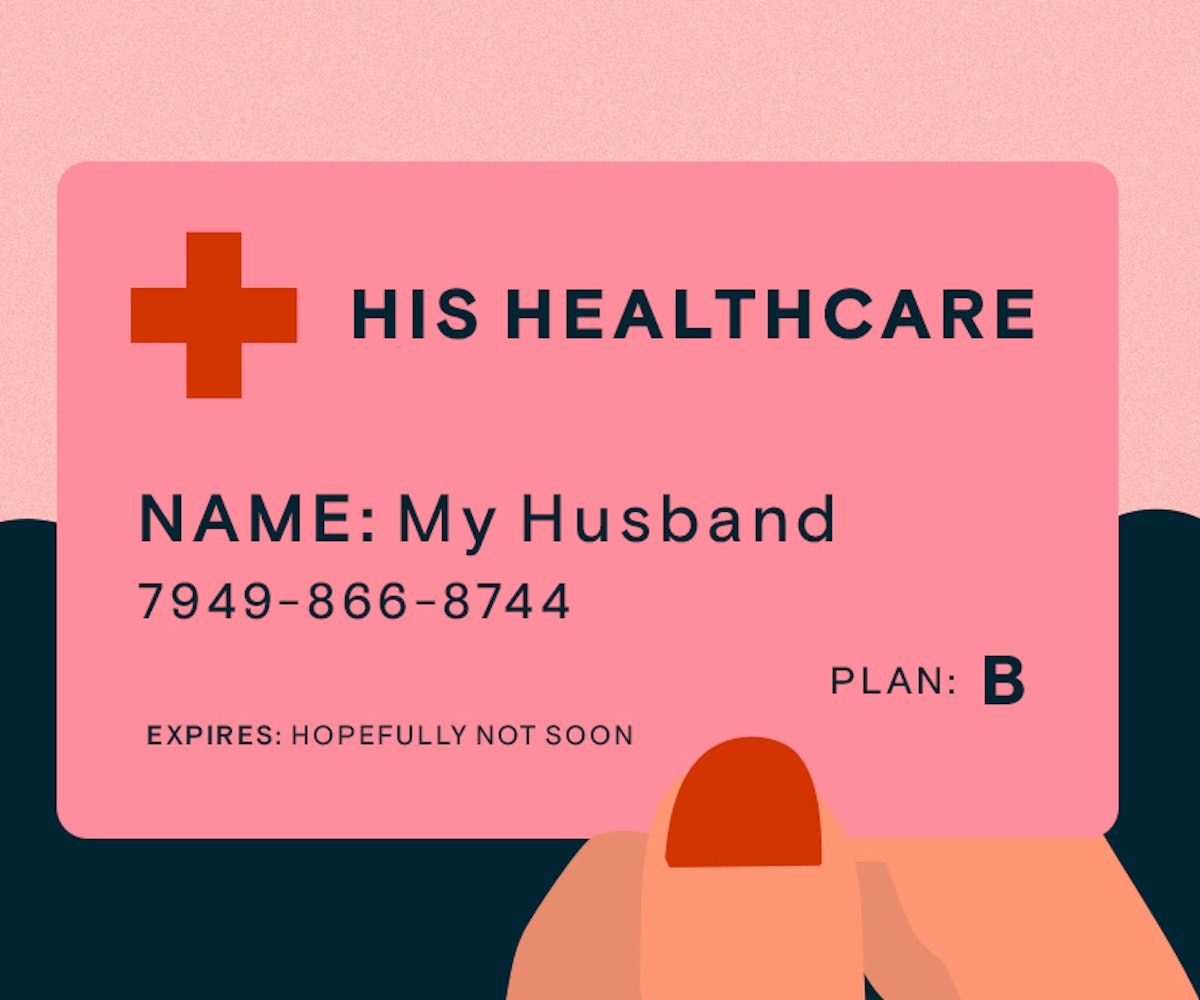 When we got married last year, I didn’t consider taking my husband’s last name for a second, but I sure did take him up on his superior health insurance plan. I was finally free! For the first time in my adult life, I was able to ditch the corporate world and become a freelancer, exhilarated by the idea of having more time to read and write and much less time to spend in meetings. But when my new benefits card showed up in the mail, I was in for an ugly surprise. My card did not have my own name on it, there was only my husband’s. I was the wife—just the wife. With horror, I realized I had committed my own worst cardinal sin: I had given away my control.

Control is such an easy metaphor. I was diagnosed with Type 1 diabetes when I was nine years old, and it would take me decades to understand that the parlance of diabetes relies heavily on moral judgments as descriptors of health. If you can manage your disease without “cheating” too much, if you can “be good” at eating well and making sure that your blood sugar was “normal,” then you could be “in control.” In other words, having your diabetes under control was not just the healthy choice, it was a sign of virtue. The fear of losing control always loomed in my consciousness, making me risk-averse and uneasy to break routines. When my blood sugar was out of control, I not only felt terrible physically, but I also felt 10,000 sheet cakes worth of guilt.

Diabetes is a numbers game with many variables. I try to predict exactly the right amount of insulin I’ll need to metabolize the food I ingest, no more, no less. The worst thing that could possibly happen is that my blood sugars fall outside the acceptable numerical range: too low, and I could be in danger of dying immediately; too high, and I could be in for a lifetime full of long-term complications from blindness to nerve damage. So I painstakingly try to estimate the amount of food I will consume and inject the corresponding dose of insulin. No matter that so many other factors are at play in determining which way my blood sugar swings, from hormones or stress to different recipes making similar foods react in my body totally differently.

I calculate with vigilance, but the margin for error is still big. No diabetic can escape the misery of highs and lows. Still, after a childhood of relying on my parents to help me manage my diabetes, I became fiercely independent. I relished having the lead role in making important decisions about my health, and being able to care for myself in every way I needed. I took pride in living alone in New York City for 10 years, even though a condition to my living situation was a bit obsessive itself: I had to post to my blog by 10am every weekday morning as a way to signal to my anxious father that a low blood sugar hadn’t wiped me out in the middle of the night and that I was alive and at work. Ever since my 22nd birthday I’d been working steady full-time jobs, the kind with inflexible hours and team-building exercises but much-needed medical benefits that made it all worthwhile. I took my insurance card and argued and advocated for myself with an endless string of health care providers and prescription delivery services in a way that you can only do when someone on the other end of the customer helpline is impeding you from getting drugs you need in order to live.

There was also the matter of my OCD. I consider my later-in-life diagnosis of Obsessive Compulsive Disorder to be a side effect of living with a chronic illness: I’m an overthinker by nature, and my disease gives me enough fodder on which to endlessly fixate. With all the numbers running through my head it only makes sense that, in addition to my insulin, my mental health became a part of my medical and prescription regimen that I managed, well, obsessively.

When you have a chronic illness, going without health insurance is not an option. When you’re a Type 1 non-millionaire with OCD, taking time to “find yourself” or “fuck the man” is a luxury too dear to sacrifice over a steady nine-to-five. But by getting married, I would finally have the privilege to do exactly that. Together, my husband and I talked about my career aspirations, and we decided that, because I could now be covered on his health insurance, I should take a little time to enjoy no longer being beholden to the corporate grind.

But then I received my health card, with only my husband’s name on it, and I had an identity crisis. When I immediately called the insurance company (an experience as familiar to anyone with Type 1 diabetes as getting one’s morning cup of coffee), they couldn’t find me in their system. I didn’t exist until I was able to give them my husband’s social security number. All mail related to treating my illness would be addressed to him. What could I do with my newfound freedom when my identity was virtually erased from the management of my disease? Being an “independent” married woman was starting to feel disempowering in unexpected ways. Had I done feminism wrong? My name had been replaced by my husband’s—literally.

And so again I learn that it’s a question of parlance. Right now I’m officially my husband’s “dependent,” but dammit, I’m also Maris Kreizman, a writer and critic and aspiring novelist. And I will be proud of it, because I can no longer bear the weight of 10,000 sheet cakes of guilt. If I can see my own name in bylines, then I can let my husband have a spot in my wallet. I always knew that marriage would create new ways to grow and also new ways to compromise, but for me, it’s also about relinquishing some small amount of my control to my husband, and trusting that he’s on my team.