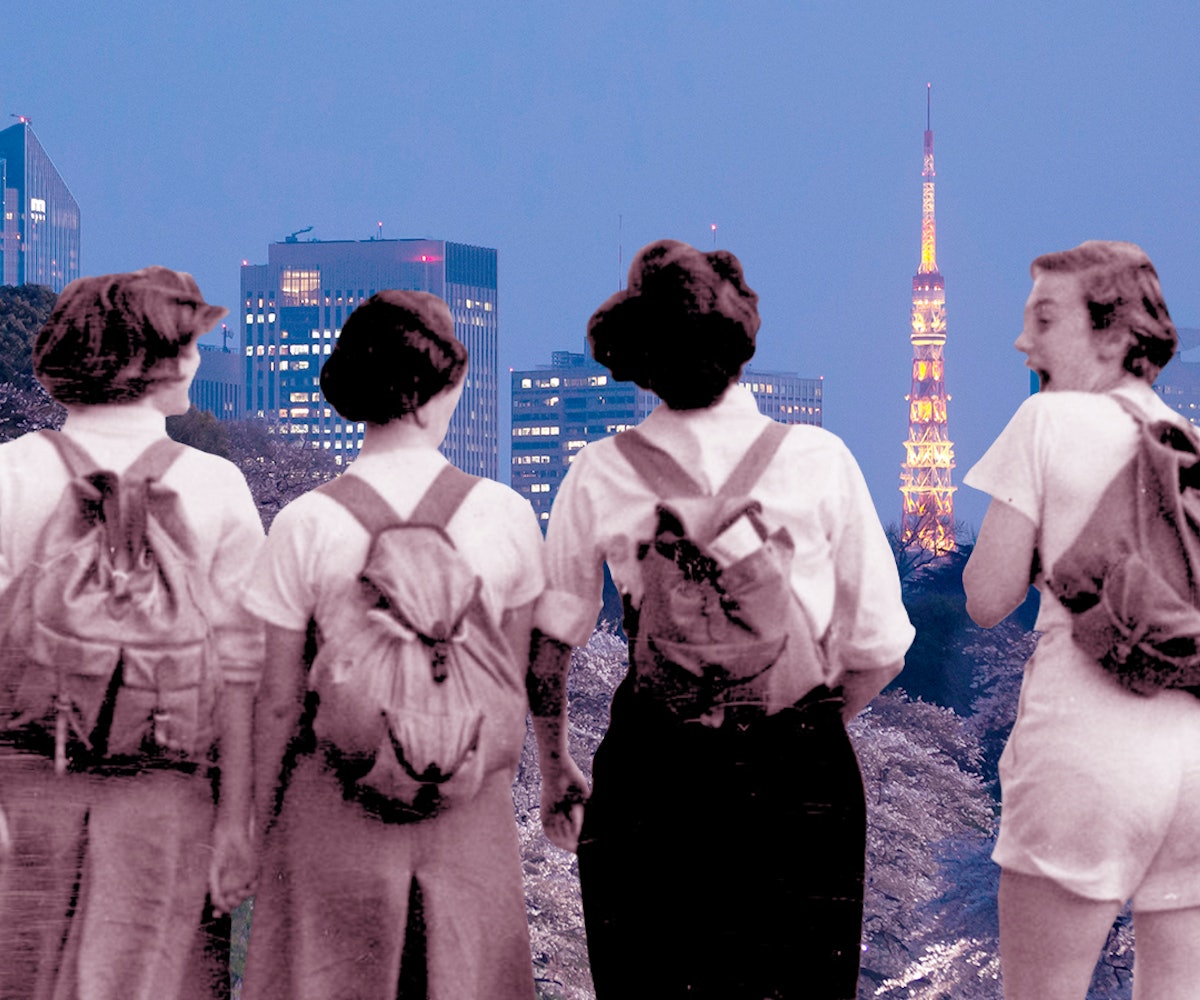 One of the most gratifying purchases I made in the entirety of 2016 was a nondescript beige bra for which I giddily forked ¥1400 (or about $13 USD) on the ground floor of bustling, balmy Kyoto Station in Japan. There was nothing inherently special about the bra itself—it was a completely unassuming, no-frills, wholly utilitarian undergarment, with nary an embellishment or even an underwire—but the moment it became mine, I hoofed it to the station’s nearest public bathroom, peeled off my sweaty, filthy Wacoal minimizer, and swapped in this unsullied, dry, gloriously fresh replacement. I felt like I’d been baptized.

I was in the midst of traveling through Japan with nothing but a backpack, and I’d packed accordingly—that is to say, hardly at all. That September, the weather seemed to vacillate between only two options: torrential downpours and the kind of oppressive humidity that feels like being tightly swaddled in a hot, wet packing blanket. Throughout all of this, I’d cycled through approximately four outfits during hikes to mountaintop temples, strolls through Harajuku, long bike rides in the valley of the Japanese Alps, and up-close hangouts with snow monkeys. We were on the move nearly every day, which meant my past strategy of sink-laundering and air-drying wouldn’t fly. By the time we arrived in Kyoto via train, every last item in my pack had been drenched in rain, perspired through, air-dried to a wrinkly, sweat-encrusted crisp, and resoaked more than once. Needless to say, I felt disgusting.

I’m not a style blogger by any stretch of the imagination, nor do I regularly chill in interesting door frames wearing flowy Reformation jumpsuits. But social media, compounded with the fact that I married a photographer, has added a flicker of self-consciousness to my own philosophy toward travel documentation; in short, the pictures are inevitable, so I might as well try to look halfway decent in them. In Japan, saddled with a backpack and consistently damp the entire duration of the trip, that seemingly simple objective was quickly left behind (along with the pair of heels I ditched in a Tokyo hotel room on day three, because when you carry your luggage on your back, priorities change quickly).

Instead, I was left to contend with the sensation of schlepping around one of the most fashion-forward places in the world while wearing clothing that I'd either sweated through three times already or that I wore simply out of necessity as my options dwindled. (I distinctly recall visiting Nara’s sacred temple complex, Todai-ji, in the middle of a 90-degree day wearing the one clean outfit I had left: a black turtleneck leotard and miniskirt. It was a combo I'd normally wear out to a bar. To stand in the presence of a towering Buddha or feed wafers to the town’s sacred deer? Not so much.)

For the first half of the trip, I felt sloppy, uncomfortable in my own skin, and, most of all, conspicuously, noticeably not cute. And then, a barely perceptible shift started to take root. I sort of stopped caring.

Having fewer options allowed me to just suit up in whatever ensemble was least filthy and actually get to the vacationing part, rather than starting each day by staring down a giant suitcase stuffed with an entire Madewell sale rack’s worth of options. Did I emerge from my trip with IG-worthy proof of my ability to adventure while looking effortlessly, breezily stylish? Nah. Did I feel deeply envious of the Tokyo women I saw gliding through the streets of Ginza in impeccable, airy ensembles? Oh, hell yeah. But once it became clear that me looking cute was a nonstarter, my own vanity was eliminated from the equation. And that tends to uncomplicate things really fast.

Last year, a male Conde Nast Traveller editor groused about how social media influencers, and their quest for that perfect IG selfie, are tainting the purity and wonder of travel; rather than taking in natural beauty and letting the awe wash over them, tourists now choose to insert themselves into the landscape, skipping over the whole “feeling amazed” part of travel and instead using the grandeur of the natural world as a mere photo shoot backdrop. For the record: I don’t think, as he claimed, that Instagram is “ruining travel,” or that influencers are “spoiling the view for the rest of us” (it’s the Grand Canyon! There’s room for everyone, my dude! A “beautiful little pixie in a designer hat” isn’t blocking your view, probably!). But speaking as someone who doesn’t exactly leap at the opportunity to be photographed when traveling, I find myself occasionally asking my partner to be complicit in an Instagram husband dynamic. I mean, find yourself lounging supine on a beach on the Amalfi coast or standing on the summit of a mountain you just climbed and try to suppress the urge to document yourself there. That sort of journey is a narrative anyone would want to include themselves in.

But, when you’re lumbering through the winding alleyways of Kyoto wearing workout attire and aching for a laundromat, that dynamic shifts a little bit. Or, at least, it did for me.

Feeling like a poorly dressed ogre on vacation isn’t ideal, and I’ll be the first to admit it isn’t really that hard to pack smarter—but, to be honest, I don’t think I really want a suitcase that runneth over with cute clothes on my next trip. Not just because eliminating the paradox of choice frees up extra brain space and time that might otherwise be wasted on fretting over what to wear, but because it sort of forced me out of front-facing camera mode: to take it in, to feel that once-in-a-lifetime awe fully, to turn my gaze outward, and, yes, perhaps to feel a little more humble about my place in the world, instead of seeing each incredible place as an Instagram playground.

Though, next time around, I’ll probably bring a couple more clean bras.