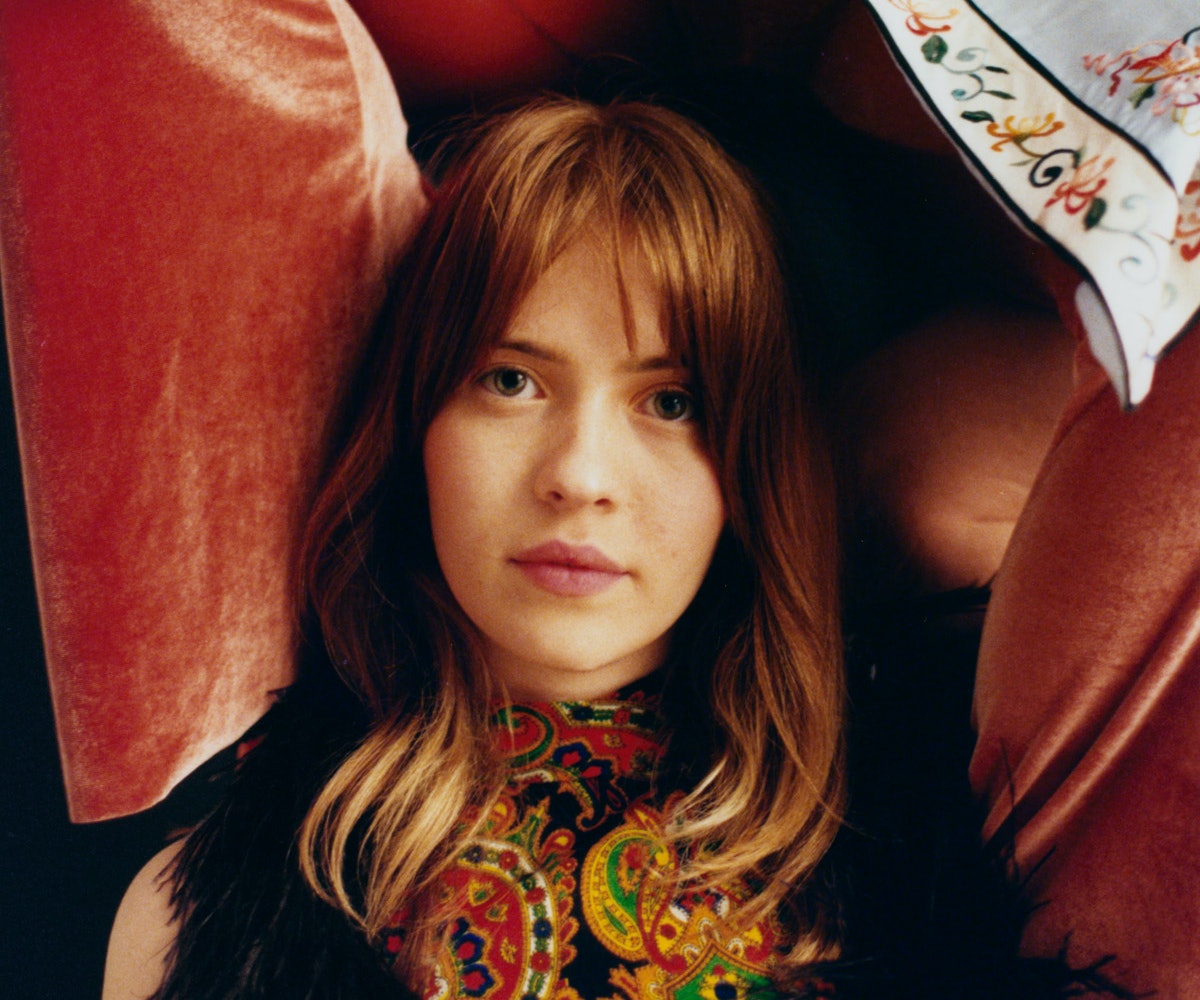 The first hot day of summer sparks flashbacks of licking popsicles, soaking up the sun rays, and trying to keep cool at the pool. Who better to inaugurate the impending change of seasons than wiissa? Comprised of Vanessa Hollander and Wilson Philippe, the nostalgia-inducing photography duo creates vibrant photos and films that call to mind picture-perfect summer days. When we first interviewed the duo a few years back, they shared their perspectives on each other. This time, we're learning more about their creative process as well as their latest work.

On top of their already impressive archive of music videos, wiissa recently released a short film titled Midnight Ramblers. The fictional documentary-style video revolves around the idea of groupies, showcasing how they influenced fashion and inspired music.

Read the whole convo and watch Midnight Ramblers, below.

How did you both get started in photography?Vanessa Hollander: I think it’s something we always both loved growing up. I know I’d always steal my parents' cameras. Even with videos, I used to steal my dad’s VHS camera and just do fun stuff with my friends, like film stupid little videos and fake little photo shoots. Wilson and I met when we were 14 and 15; I think that’s when we started to like photography and video more and started to take photos and videos of each other. Once we started doing that, we moved on to doing that with our friends and just put on little photo shoots and made our dream worlds together. From there it developed more and more.

Wilson Philippe: We just shot each other a lot.

VH: It all happened pretty naturally.

WP: And then it just spiraled down to what it is now.

So you’ve been collaborating together since you started then?VH: Yeah, basically. It’s funny because there isn’t really a specific time that we started doing it more seriously either. Ever since we took it seriously, we’ve been together so we’ve never really had any sort of career in photography or video without each other.

WP: I guess now you could say we’re professional photographers, but it just happened so gradually we didn’t even see it happening.

What’s your process like when you’re starting a project?VH: A project all starts with one photo, or song, or verse in a song—something very small that will spark it. Then from there, it’s just using that feeling to inspire a shoot and finding all the reference images; really planning the feeling that we’re going for, for a shoot. From there, Wilson’s better with the logistics.

WP: We’ll have a good concept and then [we tackle] the logistical side—like hiring stylists or models, finding a location, figuring out what kind of camera I want to use, and what kind of film. Then we just do it.

VH: A lot of the casting, we actually just do from Instagram. For casting, we look for someone who fits the feeling of the shoot, and then the shooting process is actually the shortest part of it all. And that’s more fun than the planning. Then, after we shoot it, we go through a pretty long process of developing the photos; we scan the photos and get the perfect texture in all of them.

Where do you find your inspiration?WP: We get it mostly from images we find on the Internet, and not from specific artists. We have like banks of folders of images on the computer that are reference inspiration photos.

VH: The Internet is such a close part of our lives.

How did you develop your aesthetic?VH: Everyone says that we’re very '70s, and when people started saying that, I didn’t even really know what that meant. It was never on purpose. Our aesthetic also developed slowly and naturally. It was from the clothing that I wore—I’ve always loved bell bottoms—that we used to style ourselves and our friends. Otherwise, our aesthetic is really inspired by where we grew up. We’re both from Miami, Florida, and I think just being surrounded by the sea and sun has made our work very colorful.

Do you have any favorite stylists you work with, when you don’t do it yourself?VH: For Midnight Ramblers, we worked with an amazing stylist named Amanda Lee Shirreffs, who is so fun to work with. She's actually is in the film herself, too, because she came over to our apartment to talk about it a bit, and she started telling me about her groupie story. And she has amazing style, too. She was really fun to work with. And then we work with another stylist who works in L.A., Chloe Chippendale who owns Immaculate Clothing, a lot, too.

What cameras do you use?WP: When we’re doing photography, we usually use a Nikon FM3A, which is a regular 35mm SLR camera, and we shoot on Super 8. I don’t know. We’re always changing. The cameras always break, and we get new ones. But it’s usually like a Braun-Nizo S48. That sounds very technical. And then we shoot a lot on Polaroid. I have a Polaroid 600SE camera, but unfortunately, no one makes the film for it anymore.

VH: It’s our favorite, too.

WP: I don’t know what we’re going to do. I guess we’re just going to have to deal with losing our favorite format.

WP: I can go out and buy like a thousand packs of film, but every time I’d shoot, I’d be too stressed out that I’m wasting it and it’s one of the last ones. It’s not worth it.

Why do you like to work with film rather than digital?VH: For us, it’s mostly just because of aesthetic reasons. Wilson actually bought me my first film camera when I turned 16, and once we got a little back from that camera, we were like, "Okay, this is it. We’re never using digital again." I think film is more fitting for us because it has a more imperfect and nostalgic quality that is a lot of what we’re trying to get at with our work.

WP: And I spend a lot less time dealing with postproduction if it’s film. In digital photos, the color balance is always off, and it takes forever to get it right, whereas, on film, it’s usually pretty close to what we want.

The last time we interviewed you was back in October of 2014. What’s been new since then?VH: We were actually living in L.A. for a bit at that point, and honestly, I think, that’s when things in our life really picked up. Since then, I feel like a lot has changed and we’ve grown so much. We ended up moving back to New York. We’re both finishing up school right now, and I think we’re probably moving back to Miami next year. That idea probably wasn’t even in our head at that point. And since then, we’ve done so many more music videos. We were a lot more photo-based then.

WP: We’re just picking up experiences as we go along, and just learning incrementally.

Midnight Ramblers is your most recent work.Why did you pick groupies as your inspiration?VH: I’ve had kind of a groupie obsession for a while now, which is weird. I feel like I’m a groupie for groupies. Throughout high school, music’s always been such a big part of my and Wilson’s life, and I have a few favorite bands that I was really obsessed over. I remember everyone at school just calling me a groupie because I loved their music so much, and I didn’t really understand what they meant by it. I was like, “What? Don’t groupies sleep with the musicians? I’ve never even met a musician.” So I started thinking about why people are called groupies just for being serious music fans, and then I was thought about how even if I really was a groupie, it's not a bad thing.

I had a really cool English teacher my senior year of high school who showed us Almost Famous in class, and that was the moment where I was like, “Oh my gosh, groupies are so cool, and they’re so underrated and ignored and everyone thinks that they’re exploited and desperate, but they’re actually really badass women who are helping the music and who are stars in their own right. They’re stylists, artists, musicians themselves.” I think my experiences, experiences from movies, a few groupie memoirs I’ve read, and also my friends’ experiences really inspired the film. A lot of our favorite style icons from the '60s and '70s were actually groupies, so I think it was kind of our tribute to the women who inspired music and also set some legacy in fashion.

The video has a feminist vibe to it, especially from the quote, “We’re not getting ready for them. We’re getting ready for us.” Was that intentional?VH: Yeah, for me, I consider myself a feminist, and Wilson does too, and all the girls in the film do too. We kind of wanted to explore the more feminist side of being a groupie—just doing what you want to do. I think a lot of people view groupies as exploited, and I think it was us trying to show how empowering it was for these women. And it is for these women today, too. So I think that also came pretty naturally because that was just our views on it.

There’s a big emphasis on girls being in groupies. Do you think all groupies are always female?

VH: I don’t think there are many male groupies sleeping with men musicians that I know of. That would be awesome. There should be more. But a lot of the stories that I’ve read are about women. I think being a groupie is about really loving the music and wanting to get close to the band.

What do you think a modern groupie is?VH: I think it’s a little bit harder to be a groupie today, just because there're so many more restrictions security-wise to get to your favorite band. Like in a lot of these memoirs that I was reading, it was so easy for them to just walk backstage to see their favorite musician and talk to them. But now there're so many different barriers preventing you from getting backstage. That’s why a few modern groupies are a bit more pushy in their message of getting back there.

I noticed that most of the girls in the film have different groupie names. How did they come up with those? VH: We were really inspired by the Girls Together Outrageously, which is a group of groupies from the '60s and their band; Pamela Des Barres was one of them. They all had their own names for each other and "Miss" before their first name. And then there were groupies from the '70s like Lori Lightning—Lori Maddox was her real name. We worked with all the girls to develop their names. Sometimes, they would come up with their own. They’re all pretty inspired by concrete things. Lula Costel was inspired by this Brazilian musician I love, Gal Costa; Suzy Stardust after Ziggy Stardust; Lori Lightning and Lou Lightning; Mandy May, my friend Amanda and her boyfriend just made themselves. They all kind of came about naturally.

Do you have groupie names for yourselves?VH: It's a weird joke we have. We always pretend that Wilson has a band, and he like makes up fake songs for me. And he has one that he sings sometimes called Lady Lightening, so I think that’s mine. But Wilson doesn’t have one yet. He needs a groupie name.