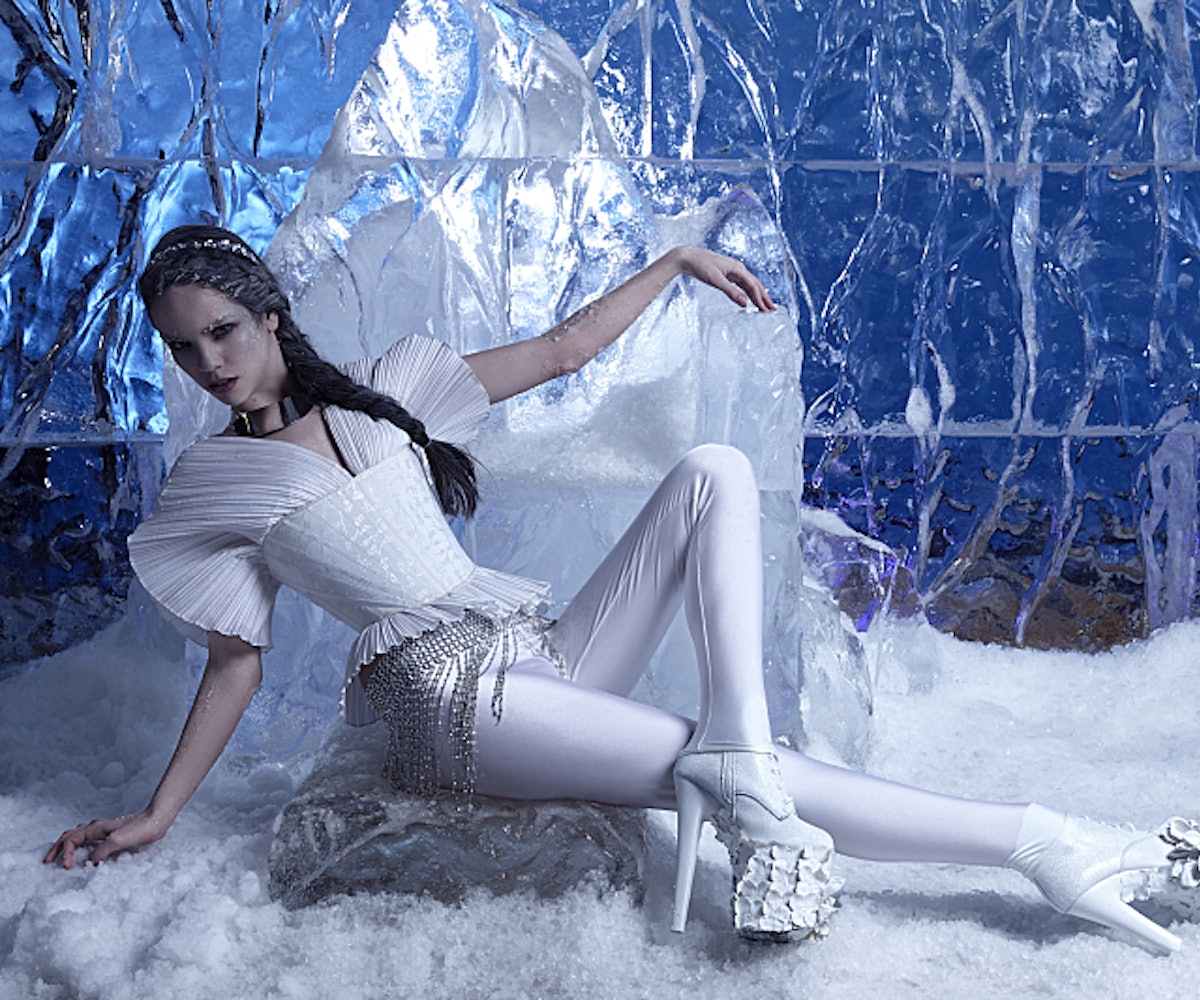 Grab your tissues and popcorn because this episode reminded me of a scene from a Nicholas Sparks movie! Emotions, drama, and tears were everywhere this episode. This was one of my favorite episodes so far...and you might be surprised as to why.

Blah, blah, blah, Queen Lenox won best photo last week and we have the privilege of staring into her piercing eyes for an entire week. We are not worthy. Once we stop gawking at her beauty we see that Mirjana and Denzel cannot keep their hands off each other. Surprise? Not at all. They haven’t left each other’s side this whole time we have been in the house—and let me just tell you that it is very annoying. I thought this was a modeling competition, not a dating show.

Our challenge for this week involved scripts, kissing, and a whole lot of acting, especially for me. Playing a straight character is not a walk in the park for this guy, as you can obviously see. (If you can rewind to Episode One when I wore six-inch heels.) I was paired up with the Ice Queen Kari and I do have to say that we had an absolute blast doing this challenge. We opened the script and just started laughing at the fact that our two blonde heads had to lock lips. I mean, she’s gorgeous...but she’s not Matthew. We quickly got our kiss over with and started going through lines.

We could hear and see everyone practicing and it was a hoot watching these crazy folks act. Some people were so committed to this I couldn’t even handle it. Then there was Kari and me laughing and having a good 'ole time. We are no actors, but Denzel and Shei, wow they were into it! Did you see their kiss? Commitment. Mirjana and Keith were probably my favorite to watch, just messing up words and mispronouncing them. I couldn’t help but laugh. Lenox as we all know has this switch in her head that she turns on when cameras are around and it was on full force during this challenge. Adam surprised me with his acting. I didn’t see him as a front contender in the challenge but after about thirty minutes of him practicing, he had it down to a T and even brought his own character to it. I was impressed! Raelia, oh Raelia, she was killing those weird words, right? I had to pause the episode because I thought I was dying of laughter. She never ceases to make me proud! Ultimately, Denzel won this one, and I have to hand it to him, he killed it and made sure we had no chance at winning this one.

What did you just say? Did my ears deceive me? I over heard a conversation between Denzel and Keith as they were talking about how they don't want me to win the competition because Denzel doesn't think a man should wear heels (and six-inch patent leather ones at that). Immediately after I heard that, I struted my teary-eyed self down the stairs to find Raelia. I honestly have never been so hurt in my life. The thing that stung the most is that it was from someone that I had grown to care about in the house. It is not so much as to what was said it was more as to who said it. It hurts more when you hear things that your friends say about you and even though this is a competition, these housemates are like my family. The comments put me back in a place that I never want to go again. Being bullied, being made fun of, crying myself to sleep at night. That may sound dramatic but it is the truth of what my life was like years ago. I have worked very hard to grow in confidence and let the world see me for me and in one moment, it all came crashing down. It is important for all of us to learn from this situation. Don’t be afraid to be yourself. You will have haters for the rest of your life, but don’t let that discourage you from being who you are and sharing that with the world. We are all beautiful—no matter if you wear heels or penny loafers. I had one moment of forgetting this fact, and I hope you never have a moment where you forget how amazing you are. I was blessed to have Kari, Mirjana, and Raelia with me after it happened, building me back up. Adam was the one who surprised me the most. He showed me who he really is that night, which is an amazing human being full of compassion. It was an emotional and trying evening but with all things said and done, I became a much stronger person from it.

The craze of “Frozen” took over Top Model during our photo shoot. We had Elsa shooting us with icicles left and right as we tried our best not to get a frost bite. On this photo shoot, the three that stood out were Lenox, Adam, and Ben. Oh wait, Ben’s gone!  Maybe that was me dreaming that he was there.

Lenox once again delivered an epic shot while Adam showed us that he has potential for the first time in my opinion. Keith, Raelia, and Kari struggled during this shoot and I found their pictures to be the three worst. Keith looked just plain dead while Raelia couldn’t get her angles right. She is still my boo and I know she can do better! I think Kari gave up before this shoot even started. She has been dubbed the Ice Queen with her new makeover and a lot was expected from her during this shoot. Unfortunately, she had minimal clothes on and the cold was getting to her more so than anyone else. Even though I liked her photo, it was not my absolute favorite. Mirjana did a good job as well as Shei, but I think they can do better in the coming weeks. Matthew didn’t breathe icy life into his shot for me and left me a little disappointed. He looked great, but it was just boring and not the best I had seen him during this competition. Last but not least, we had Denzel. What were you crawling towards? Looks like you got kicked out of a woman’s car after she found out what you said to me on the show. Just teasing! Not a huge fan of the shot but it’s the first time your beard looked real to me. Which is a plus? I believe that with the level of intensity of this shoot provided us all with many struggles.  But only the strong will survive, so we will have to wait and see who has what it takes.

Oh snap! Cat fight! Raelia and Mirjana are going at it on the bus. What do all of us do? Sprint to the bus to see what’s going on, only to find the most hilarious cat fight taking place about who is going to win and how you are not my competition. I swear, every single one of us was laughing our butts off during this and even hours later we couldn’t stop laughing. It was just an unnecessary conflict about nothing. Classic cat fight. I could watch this scene from the episode over and over again until my insides hurt from laughing so hard!

Click, click, click, are those six-inch patent leather heels I hear? You heard right darling, ain’t nobody going to talk behind my back and me not stand up for who I am. First one up? Me and my heels. That was the first time that Denzel and I had spoken since the turmoil. It was the best feeling to have everyone supporting me and also the three judges standing up for me. To hear Tyra and Kelly have my back made my day and meant more than they will ever know. This industry is run by women and always will be. To say derogatory comments directed at gay men, as well as women, is just unacceptable if you want to be successful in this business. The situation is the exact same if I was to say something about him and he would have reacted in a similar (probably less tears) fashion. So many important lessons can be learned from that night, including standing up for who you are and not caring what others think. It is your life and you can be and do whatever you want, if you are scared of how others will react, then you will never find happiness.

Oh, and Kari went home. Really hard to see her leave us but someone had to go and I’m just happy it wasn’t my boo Raelia. Kari we will miss you so much in the house!

You are all probably wondering if Denzel and I are on speaking terms. Well, yes, we are. We have had many heart to heart conversations since then talking about life and he has become one of my very good friends. I preach that you should not fight hate with hate so be above the situation and don’t respond with hate. I love me some Denzel and you should also.

Tune in next week for an all new episode of America’s Next Top Model Cycle 21 on Friday October 10th at 9/8c on the CW Network. Kelly Cutrone isn’t an easy person to please and you shall see why. Also, we will be finding out the results of our DNA testing. You don’t want to miss it. In the meantime, be sure to follow me on Twitter and Instagram, as well as ANTM on Twitter and Instagram.  Until next time, bootchers and toochers.