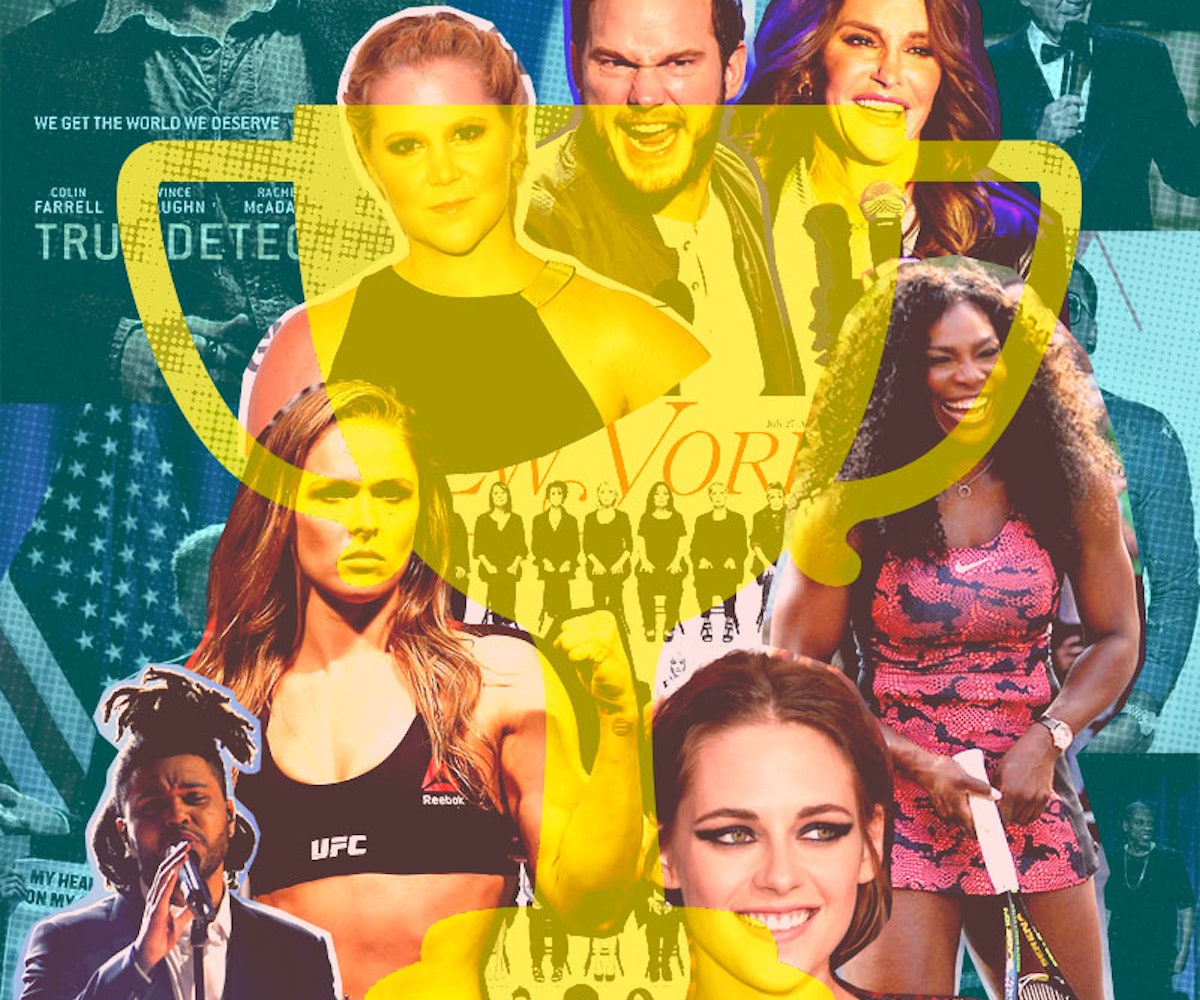 With the summer coming to a close, it’s time to turn off the propane, drain your last Shandy, and come inside. Your dark ruler Lord Internet has been waiting patiently for your return. And as his dutiful servants, we’re here to catch you up on who won and who lost the summer. Welcome back pretties. We’ve been expecting you.

First, there was the cover. Then, there was the speech. Now, there’s the future. And if Caitlyn Jenner’s message of tolerance, equality, and acceptance is being heard as loudly as we think it is, then that future is a bright one.

A few years ago, Amy Schumer was the kid at the back of the class with her hand raised, trying to get everyone’s attention. After three seasons of her Peabody Award-winning Comedy Central show Inside Amy Schumer established her as one of the most important feminist voices in Hollywood—watch her “Last F*ckable Day” sketch to see what we mean—Schumer jumped to the front of the class. And with the success of this summer's Trainwreck, Schumer is now a full blown movie star, and we’re all paying attention.

It was near impossible to turn on the radio without hearing “I Can’t Feel My Face,” The Weeknd’s propulsive hit single that snatched the title of “Song of The Summer” from out of nowhere. Once best known for being the enigmatic, press-shy Drake acolyte and hook-man, the Toronto transplant had as many as three songs in the Billboard top ten this summer, prompting The New York Times to wonder if The Weeknd can “turn himself into the biggest pop star in the world?” With the upcoming release of his hugely anticipated sophomore album, Beauty Behind The Madness, we’re about to find out.

Hollywood is still very much a boy’s clu —both behind and in front of the camera—but all it takes is one look at the top-grossing films of the summer to see that the gender gap is shrinking. Cinderella (starring Lily James and Cate Blanchett), Spy (starring Melissa McCarthy), Trainwreck (starring Amy Schumer), Mad Max: Fury Road (starring Charlize Theron), and Insurgent (starring Shailene Woodley) were all bona fide hits, and with the upcoming Hunger Games finale poised to become the biggest movie of the year, the female-led paradigm shift in Hollywood shows no signs of slowing down.

This summer, Ronda Rousey was as inescapable as the armbar, her devastating signature move. In a sport ruled by men, the 28-year-old MMA fighter (and part-time swimsuit model) has emerged as its brightest star, and not just for what she does inside the Octagon (that is: dominate, annihilate, and humiliate her opponents). Rousey is an outspoken feminist badass, who can dish out truths about body image, gender roles, and self-worth with the same ease as an uppercut to the chin.

Full disclosure: When Kristen Stewart finally addressed her sexuality, she did it in the cover story of our September issue. Shameless self-promotion aside, the American Ultra star’s words—“Google me. I’m not hiding”— were as powerful as any spoken by a celebrity who’s ever had their sexuality unfairly scrutinized.

This summer, Serena steamrolled her competition en route to a sixth Wimbledon title and her 21st major overall. At 33 years old, the tennis phenom is in the midst of her greatest season yet, which can be capped off in historic fashion. If Williams wins this month’s U.S. Open, the world’s number one will be the first woman to complete the calendar Grand Slam since Steffi Graf did it in 1988, and will stake her claim as one of the greatest athletes—man or woman—ever.

Even before Jurassic World became the world-dominating hit it turned out to be, Chris Pratt was being pegged as Hollywood’s box office savior thanks to the surprise success of last summer’s superhero space opera, Guardians of The Galaxy. But after the eye-popping success of his dino reboot and the charming, self-deprecating press tour that preceded it, Pratt has become the kind of can't-miss movie star we haven’t seen since the likes of Tom Cruise and Will Smith.

Sometimes it’s easy to forget what real reporting looks and sounds like, as we sink further and further into the abyss of clickbait, hashtags, and GIFs. But every so often, a work of journalism emerges that’s so immediate and so vital, it reminds us all of the sheer power the medium can have when at its best. The New York Magazine cover story—which gave faces and voices to 35 of Bill Cosby’s accusers through interviews, videos, and photographs—was that kind of feat. A must read if ever there was one.

No one expected the second season of Nick Pizzolatto’s weirdo crime drama to live up to the first, but no one expected it to be the colossal disappointment it was, either. From the murky season premiere, to the bloated finale, Colin Farrell, Rachel McAdams, Taylor Kitsch, and Vince Vaughn never could quite escape the gigantic shadows cast by detectives Hart and Cohle. The dialogue was clunky, the performances forced, and the mystery paper-thin. Who killed Ben Caspere? Who cares.

The only upside to the story of an American dentist who travelled to Zimbabwe and killed a lion named Cecil, was the public outcry that followed. In fact, our collective rage was so deafening, that it prompted major U.S. airlines to ban the overseas shipment of hunting trophies. Meanwhile, Dr. Walter Palmer is still in hiding. We roared, and they heard us. For you, Cecil.

Of the ten highest grossing films this summer, two of them were courtesy of Marvel. Still, Avengers: Age of Ultron felt like a rushed rehash of the original, while Ant-Man failed to ignite the same mass hysteria its oddball cousin, Guardians of The Galaxy did two years ago. And then there’s Fantastic Four, which—apologies to Amy Schumer—was by far the summer’s biggest trainwreck.

The first (and maybe only) rule to starting a rap beef: Don’t pick a battle you can’t possibly win. Someone should have relayed that message to Meek Mill, who decided to poke Drake—a.k.a the biggest rapper alive—with a stick, in an apparent attempt to drum up publicity for his tepidly received new album. When Meek accused Drake of not writing his own raps, Drake released two devastating diss tracks and turned his nemesis into the Internet’s whipping boy. The lopsided feud will go down as the Twitter generation’s first real rap beef, and Meek Mill its first casualty.

As of today, noted xenophobe, misogynist, reality TV, star, casino magnate, and human catchphrase generator Donald Trump, has opened a 20 point lead on his closest rival in the race to become the Republican Party’s presidential candidate. What else is there left to say?

One morning in late March, a phalanx of famous pop stars turned their social media avatars electric blue, and the Internet freaked out accordingly. Tidal—a new streaming service from Jay Z—was coming, and the music industry would never be the same. Or something like that. From the moment that same group of mega-rich pop stars strutted out on stage in an overwrought unveiling ceremony, the supposed “Spotify killer” seemed doomed to fail, thanks to a tone deaf mission statement and lacklustre service. Now, six months after its launch, Tidal resides in the outer recesses of the app charts, and Jay Z, at least for one summer, looked  human.

Lately it feels like late night TV has undergone more changes than Kylie Jenner’s hair color. Jimmy Fallon replaced Jay Leno, and Seth Meyers replaced Jimmy Fallon. Jon Stewart, David Letterman, Craig Ferguson, and Stephen Colbert all moved on, and Larry Wilmore, James Corden and Trevor Noah got new jobs. Oh, and Colbert is coming back too. But despite all the late night musical chairs, there’s one change the genre refuses to make: Putting a woman behind the desk.

It feels wrong putting one of the most profitable and innovative companies in the world on this end of the list, but after Taylor Swift’s open letter called out Apple for its initial decision to forgo artist royalties during the three-month free trial of their new streaming service Apple Music, we didn’t really have a choice. Oh and by the way: Have you noticed anyone wearing an Apple Watch yet? Neither have we.