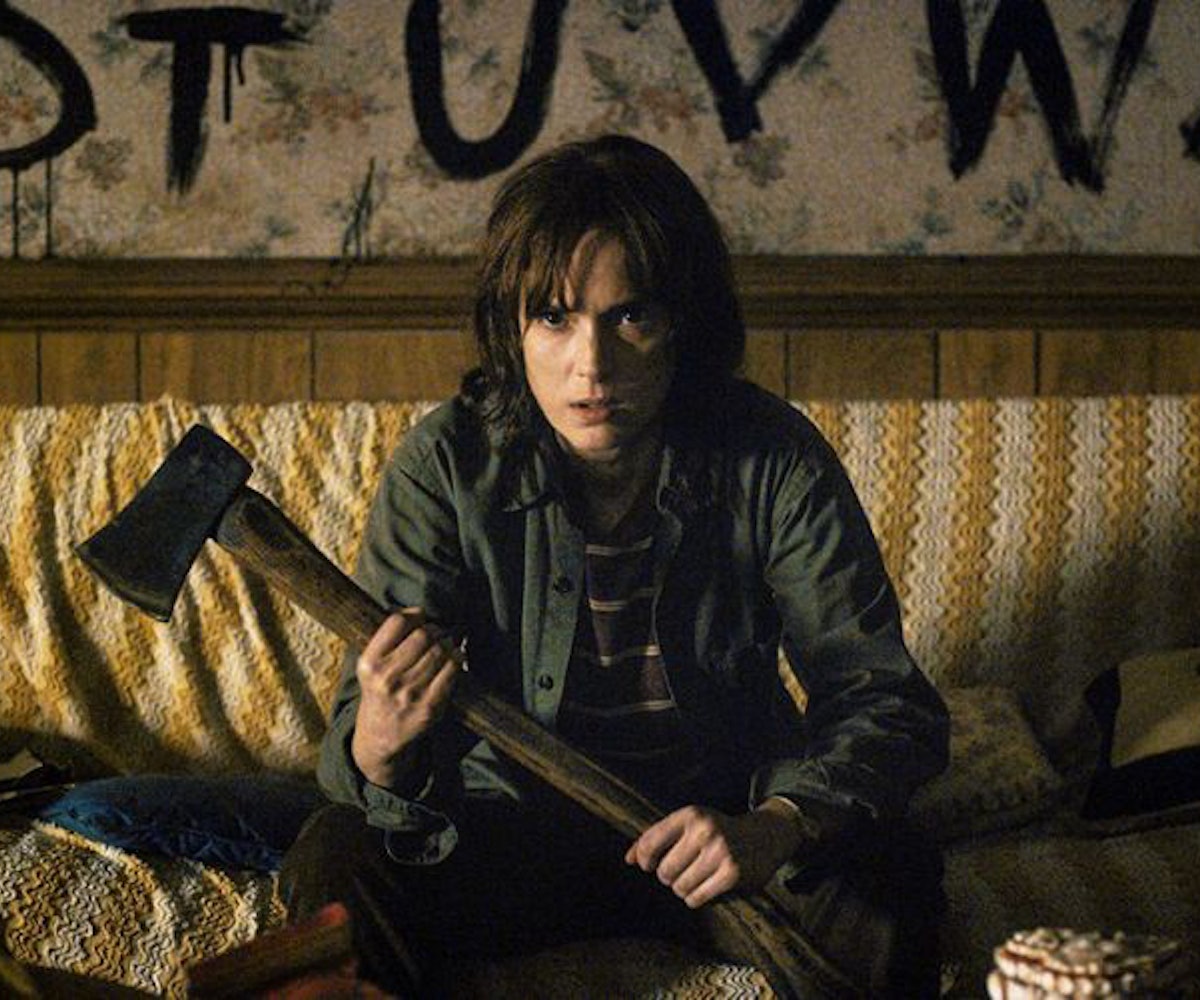 With Stranger Things, viewers have a show that can do both things audiences want from a TV series: traffic heavily in emotion-inducing nostalgia and introduce brand-new, maybe even mind-blowing, ideas. There are multiple ways that Stranger Things pulls this off (warning: spoilers ahead!); in terms of inducing nostalgia, the series takes place in the '80s, that magical time when all our favorite childhood movies (E.T., The Goonies, Beetlejuice) are set; then there's the fact that just about every beloved character archetype is realized (nerdy kids, mysterious loners, popular high school jock-jerks, dopey dads, sassy sidekicks, government bad guys in black cars); and finally there are the constant pop culture references (Alien, Firestarter, The Thing), which allow viewers to subconsciously connect the dots in case they had any remaining questions about whether or not Stranger Things traffics in capital-H horror.

But if nostalgia was the only medium through which Stranger Things communicated, it would get pretty dull pretty quickly. Instead, the show manages to subvert just about every well-worn trope by doing things like making King Jock-Jerk turn out to have a conscience after all, by turning the lone adult male hero into a traitorous snitch, and by cold-heartedly killing off many of the most awesome people. (RIP Barb. We hardly knew you and yet we truly loved you.) See? Minds blown.

But there's no better example of how Stranger Things pulls off walking the fine line of subverting nostalgia than through the casting of Winona Ryder as Joyce Byers, mother to a mysteriously missing child. The mere presence of Ryder induces a specific type of time travel; there isn't an actress working today who is more easily identified with '80s-era teen angst than Ryder. Her roles as Lydia Deetz in Beetlejuice, Veronica in Heathers, and Rina in Lucas are all emblematic of the type of outsider teen hero upon which Stranger Things relies. See Winona Ryder and you can't help but think of alienation, struggles for and subsequent abandonment of peer acceptance, and a world where it's better to live on the edges because the center cannot hold. See Winona Ryder and you know that you're watching something where the embrace of weirdness is a liberating, even gleeful thing. See Winona Ryder and you know you're home, but it just so happens that home is full of stranger and stranger things.

In other words, Winona Ryder is singularly able to make us think of the first time we ever heard Joy Division and recall every single one of the Heathers quotes we considered tattooing on our body at one point or another; in other words, Winona Ryder is, and always will be, the ultimate teen outcast. Except, of course, for when she isn't. Except for when she's the ultimate mom outcast.

The way in which Stranger Things subverts our idea of Winona Ryder as a teen outcast by making her a mom is brilliant because there is nothing less like a teen than a mom—at least on-screen. (NB: This is not to say that teens can't be moms—they can be and they sometimes are. But the whole reason we even qualify teen moms as being "teen moms" instead of just "teens" or "moms" is because when a teen becomes a mom, they abandon some of their essential teen-ness in order to embrace the diametrically opposed qualities inherent to mom-ness.) We all learn from a young age that teens are fun, and moms are not. It doesn't even matter if it's true because it's what we've been told over and over. Moms on-screen—particulary in horror films and TV series—tend to have rather thankless roles. Think of Mrs. Wheeler, Nancy and Mike's mom in Stranger Things; she's the responsible parent, the one who just wants what's best for her kids and family, has no trouble with laying down the law even though she always wants her kids to feel comfortable enough to talk with her about what ails them, and is well-meaning, but entirely oblivious to everything going on right under her nose. (Like, literally. She didn't notice she had a house guest for the duration of Eleven's stay.) There’s nothing necessarily wrong with these moms per se, there’s just nothing right about them either. Moms on-screen never seem to know what's going on around them, endlessly fixated on the mundanities of their day-to-day life.

There's little doubt that the character of Joyce Byers—loving, messy, imperfect, human—would be a great example of the wonderful complications that are involved with being a mother no matter who the actress was playing her. But the fact that it's Winona Ryder is a specific stroke of genius which makes it all the more possible for viewers to relate to the trials, the dizzying highs, and the devastating lows of being Joyce. In New York, Jen Chaney writes that Ryder brings a singular level of relatability to the screen, explaining that with Ryder "you make the leap to empathizing with her even faster. After all, you grew up at the same time as she did. You used to wish you could be her. Let’s be honest: You still kind of do." Ryder's casting serves as a type of shorthand for the audience. We immediately know that this is a character who is going to be intelligent, yes, but also damaged; it's going to be a character who does not live by the rules of the society within which she lives, one who could be an icon, but instead chooses to be an iconoclast. Just as Winona Ryder did decades ago by portraying a different kind of teen protagonist than was currently being seen in movies like Pretty in Pink or The Breakfast Club, in Stranger Things, she becomes a different kind of mom than what we're used to seeing, one who is so much more real than what we're used to seeing, one who reminds us that it's not just teenagers who can feel like they don't belong and like they need to fight against the pressures of an unfair society, but it's moms too—it's everyone, really.

In Stranger Things, Winona Ryder's presence reminds us that it's okay for us to be strange, no matter what point we're at in our lives; rather, it's not just okay to be strange, it's pretty much necessary, because as strange as we might be, the world is always stranger, and so we might as well embrace it.