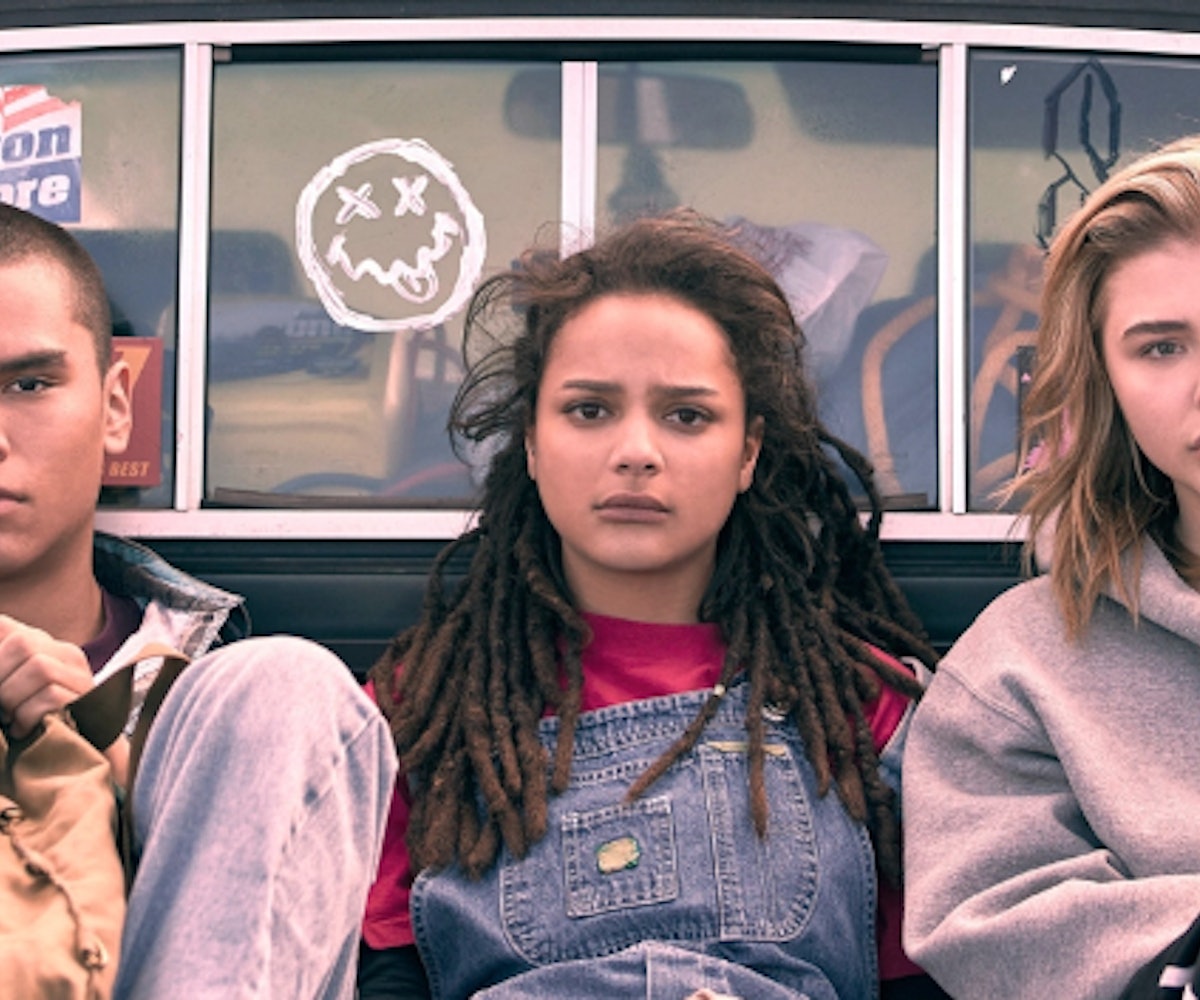 The Tribeca Film Festival has been running for close to two decades at this point, and, for much of that time, it hasn’t really formed a clear film-culture identity like those of its closest U.S. relatives: Sundance (for its early year timing and indie-buzz focus; sometimes the two fests even have some title overlap) and the New York Film Festival (for its Manhattan roots). In part this must be because the creation of the festival seemed especially reactive, more so than most; Robert De Niro spearheaded it as a post-9/11 initiative to reinvigorate New York’s way-downtown. I’ve been attending the festival regularly for five years, and while it’s had stints where it seems especially friendly to documentaries, comedy, or TV-inclusive projects, its grab-bagginess has been part of its charm.

That quality also allows Tribeca to shift its mission, shedding one identity for another as needed. I’m hoping this year’s pivot toward gender equality sticks around for a while. Though it screened fewer films than in some past years, nearly half the films at Tribeca 2018 were directed by women, a number that handily outstrips the most recent installments of Sundance and NYFF. Even the movies I saw that were directed by men tended to have a female focus, like Disobedience and Duck Butter (winner of a juried acting award for star and co-writer Alia Shawkat), two very different sorta-love stories between women. The former is dour but beautifully acted, the latter is earnest but kind of unbearable, and they’re both out in select theaters right now. But it’s this year’s crop of female filmmakers who deserve some more attention, even when the movies themselves turn out, as at so many festivals, a little mixed.

Maybe because improv is still pretty big and/or because SNL is a hometown show, Tribeca has seemed in recent years to value both broader comedies and stories about comedians a bit more than some of the other major festivals. This year had at least two: the sweet, not exactly revelatory Love, Gilda, a straightforward biographical treatment of SNL genius Gilda Radner; and All About Nina, a fictional account of a lady stand-up played by Mary Elizabeth Winstead. Winstead’s Nina Geld is a tough, leather-jacketed comic with an abusive, married boyfriend, so when she gets the opportunity to move out to Los Angeles and try out for a Saturday Night Live-style show, she takes it, both as a career in and a relationship out.

First-time feature director Eva Vives was born in Spain, and for a while, her movie has a relaxed, European sort of pacing as Nina moves into a temporary living situation with her agent’s new-age-y friend, does local stand-up gigs, and embarks on an unexpected relationship with Rafe (Common). But a dark event from Nina’s past keeps manifesting in her current relationships, until she delivers a cathartic, scary monologue about it at a stand-up booking. From there, the movie becomes a trenchant #MeToo document, as Nina deals with the fallout from speaking up about the life that’s supposed to inform her material. The movie is saying something valuable, but Vives doesn’t seem certain about how to reconcile Nina’s status as a survivor with her comedy—or even certain if she likes comedy very much.

The constant here is Winstead, proving her versatility not just in comparison to her past roles but within the same part here: Nina is by turns caustically funny, devastated, and furious, and it all feels of a piece (Winstead has decent stand-up delivery, too, even if the material feels a little screenwriter-y). She does wonders with a little scene where a mostly naked Nina workshops some new material on her own, facing her apartment window. Those small details, set apart from the movie’s supporting characters, work best; Vives spends a lot of time on the Nina-Rafe affair, plus some time going after Lorne Michaels in a roundabout sort of way.

Self-destructive behavior gets even more of a showcase in Karen Gillan’s The Party’s Just Beginning. Gillan, who plays Nebula in the current Avengers: Infinity War, stars as Liusaidh, a young Scottish woman who is spiraling from drinking excessively to hooking up with strangers to binge-eating French fries—behavior that sounds fun broken out, but looks dizzying and kind of unpleasant when mashed into a single evening. She’s living at home and just lost her best friend Alistair (Matthew Beard) to suicide; it’s possible he was despondent over his closeted boyfriend’s rejection of him. The movie feels improbably saturated with literal self-annihilation (Liusaidh harbors some suicidal thoughts herself, and strikes up an ongoing phone conversation with a man who mistakenly calls her home phone thinking it’s a suicide hotline)—until you read a little about Inverness, Scotland, Gillan’s hometown and the movie’s setting, which has intensely high suicide rates.

Just Beginning isn’t all aftermath, or at least it fills the details missing from a simple aftermath; we see Alistair in flashbacks, and in Liusaidh’s flashes of his train track-jumping suicide, and Gillan is best at putting the movie directly into her character’s headspace. The ideas feel half-formed (as does the dialogue, often amusing but rarely quite as witty as it seems to think), but Gillan still shapes them skillfully, never belaboring her cuts between Liusaidh’s miserable deli-counter days, her reckless nights, and the past that keeps rattling around her head. She seems like a natural, and hopefully, her next film will fulfill her promise behind the camera with stronger material.

That’s what happened with Desiree Akhavan, the writer-director of the indie dramedy Appropriate Behavior, which felt more like a calling card than a satisfying narrative. Her second feature, The Miseducation of Cameron Post, won the Grand Jury Prize at this year’s Sundance and screened at Tribeca. The movie stars Chloë Grace Moretz as a teenage lesbian sent to a re-programming camp, thinly disguised as a private school, and Akhavan moves through the process—from a prom night tryst to discovery to getting sent up to a new school—with great fluidity and a wonderful lack of exposition. She fills in details—of Cameron’s life, of the various kids she meets in these weird circumstances, of the mid-'90s period—quickly and quietly, with great yet unfussy sensitivity.

Strangely, the movie isn’t quite as gripping in its midsection; the nature of the school and its smiling, friendly, low-key abusiveness (embodied by John Gallagher Jr. in a sad flipside to his Short Term 12 performance) means stalling some narrative momentum as the characters squirm between a rock and a hard place. But the movie remains funny and heartfelt, and Akhavan really sticks the hell out of the landing; the movie ends with a couple of scenes that play out with the kind of grace and open-ended confidence I associate with David Gordon Green or Andrea Arnold. Appropriate Behavior felt autobiographical in both its specificity and its limitations; Miseducation feels informed by Akhavan’s experiences as a bisexual woman while widening her view. Not every good indie movie should be treated as an audition for big-budget studio pictures, but I have a feeling that Akhavan could acquit herself well in that realm.

Teenage sexuality also figures into the flat-out best movie I saw at Tribeca this year, as yet without U.S. distribution: Slut in a Good Way, a French-Canadian delight about a trio of teenage girls working at a big-box toy store, flirting and/or sleeping with the young male employees. Director Sophie Lorain is an actress and filmmaker in Quebec whose previous feature Heat Wave (her first) didn’t come out in this country. Hopefully, someone will snap up Slut in a Good Way, because despite its small scale, it plays well on a big screen. Lorain shoots in soft black-and-white and blocks her young cast beautifully. Instead of relying on back-and-forth cuts to power her dialogue scenes (and the movie, like so many sex comedies, is more talk than action), Lorain prefers to pan and pivot her camera as the characters move in and out of frame, physically following the flow of conversation. It’s the kind of staging that must be maddeningly difficult at times, yet doesn’t feel robotic or overly poised in execution—just light on its feet, like a musical. (Amusingly, a couple of dance-centric scenes are shot more static, getting laughs from the characters’ positions in the frame.) The dialogue from screenwriter Catherine Léger zings without zingers, and the young performers are all wonderfully endearing. Though Slut in a Good Way touches upon gendered double standards and is more sex-positive than not, it’s not especially au courant. It might seem slight, if it weren’t also an announcement of a major talent. And credit due: This movie premiered at Tribeca, not Sundance or NYFF. At the moment, that alone doesn’t seem like enough to achieve escape velocity from the festival circuit. But if Tribeca works to keep its newfound status as the American film festival with greatest number of female directors, that could change.