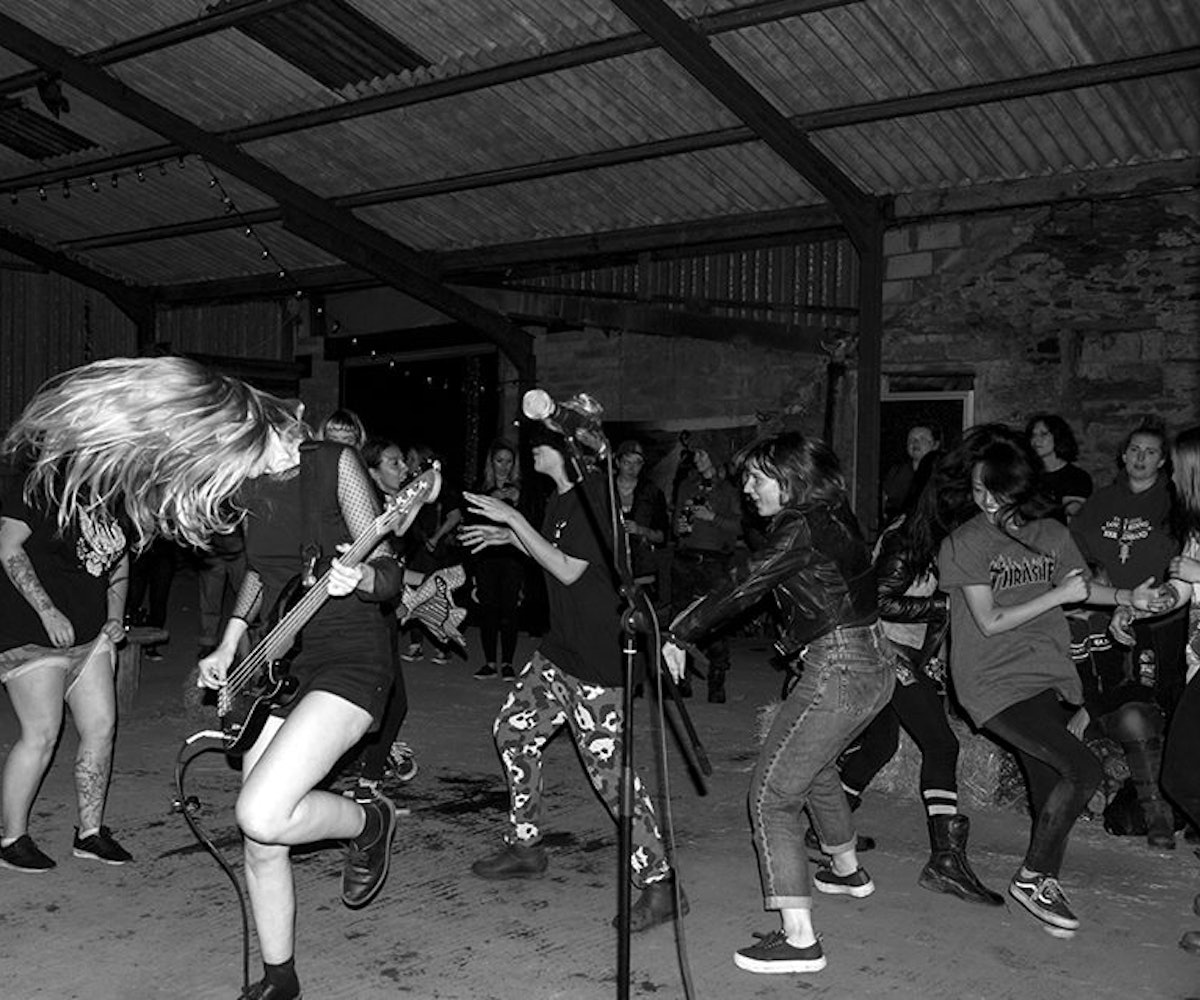 "Noise music," as a genre, holds a lot of variables. Play an experimental noise song, back to back with a noise-pop song, back to back with a noise-punk song, and you'll notice the three sound near-nothing alike. But the only thing they do have in common is a fuzzed out, loud, distorted quality—one that, although it's used by many artists, can be implemented in incredibly different ways.

The list of artists who can be categorized as noise artists is both endless and endlessly disputable, as for some it may only be one album out of four that utilizes noise techniques. But by and large, the industry has long been almost unapologetically male-dominated. Maybe it's because the only thing more terrifying than women experimenting is women experimenting and being loud about it. Since scant space has usually been made for women in these communities, we put together an international list of bands led by women who have made their own space, because, frankly, nobody needs to make it for them.

Of course, there are hundreds and hundreds of other female noise artists and musicians that didn't make this list–some of whom, I'm sure, appear to be glaring omissions to those who dedicate themselves to the genre (such is the nature of lists.) But it speaks to the fluidity of noise music that there are so many acts that can be perceived as such. It's an experimental ethos more than it is a genre; a rejection of conventionality. And we're here to celebrate it.

London-based Slowcoaches (who are releasing their next album Nothing Gives on December 2) were once described by NME as "Thee Oh Sees, but with even bigger balls." And although the comparison makes sense in terms of genre–both fall under the loose category of "garage rock"–it doesn't particularly make sense otherwise, as Slowcoaches have pulled together a sound that is much more of a callback to punk bands like X (with a tinge of pop) than it is to the post-punk bands that came after. The music is fast and loud, the vocals unwavering and aggressive, and the energy will make you want to get off your feet no matter where you are.

Dilly Dally's Sore LP begins with one of the key components of noise music–staticky fuzz. By the time vocalist Katie Monks yells "One, Two, Three, Four," you already know what to expect. Even though the first track, "Desire," is slow and longing, it doesn't lose any of the musical and vocal power behind it. The lyrics come out of Monks' mouth as a mixture between singing and a strained yell, showcasing the raw emotionality behind them. This quality is present through all of Dilly Dally's music; it can lean towards pop at times, but the truth in the emotion behind them will always shine through.

FRAU is undeniably and indisputably first and foremost a punk band. What their songs lack in length (none are longer than two minutes on their demo,) they make up for in intensity. The distortion on their tracks is so heavy you have to strain to make out the words, but with music like this, the words don't matter as much as power and force behind them.

Post-punk/no wave quartet WALL were recently named by Consequence of Sound as one of "Five Rising New York Artists You Need to Hear," and listening to their self-titled EP it's easy to understand why. The band have one of the most distinct sounds of any rock band in the city today. Their approach to noise differs from the norm–it's more toned down and ingrained, closer to a feeling than an actual pinpointable aspect to their sound. The distortion and fuzz are still there, don't worry. But not only can you understand the words to their songs–their music commands that you hear every single one.

When a band loses its vocalist, it's always a question of what they're going to do next. The vocalist, often, is the most central part of the group to the listeners, and you take a risk that the band might lose a part of their fanbase when they're replaced. But despite Alanna McArdle's departure from Joanna Gruesome for mental health reasons mid-2015, the band has stayed true to themselves and their ethos, and therefore their fans. In McArdle's place came two new vocalists, both women as well: Katy Stonestreet and Roxy Brennan. Although fans are still waiting on an LP from the new lineup, they released a single in July of this year entitled, in true Joanna Gruesome fashion, "Fucking Sick of it All." And even with the change in vocalists, no one's complaining.

Although White Lung deviated away from their noise-punk roots with their most recent release, Paradise, the band's 8-year career up through 2014's Deep Fantasy LP was defined by a deeply and politically feminist anger and aggression. Live, however, there's a mix of both their newer and older discography, for both long- and short- term fans to enjoy. About the change, frontwoman Mish Barber-Way told Rolling Stone, "I feel like I've moved past that time in my life, but to sing it is this weird cathartic thing where I feel powerful that I've gotten past that point in my life." White Lung may not be the same band they were a few years ago, but that doesn't mean their history has been, or can be, erased.

Putting together this list, I was worried I might've missed an important addition to it. So I contacted my friend Jonathan to get his input on any notable absences. "Ursula," he said, "I'm wearing their shirt right now." And he was right, as I would have regretted not putting the Boston-to-Philly duo on this list. Ursula are not polished, but with song titles like "refried beans" and "president garfield's spaghetti intestines," it's clear they don't intend to be. They don't need to be. This is a group that clearly, in true punk ethos, makes music for themselves more than anyone else–and their steadily growing fanbase indicates that it's working out for them.

If you don't speak Portugese, you probably won't understand what you're hearing, but you honestly don't need to. The intent of the lyrics, along with the intensity and psychedelia of the instrumentals, shine through in a way that proves the cliche: music is a universal language.

This band doesn't confine to the labels of genres, but definitely counts in this category. There's nothing we love more than a woman of color screaming her head off in the name of music, even if it's in the face of a white washed scene. Frontwoman Kayla Phillips also makes noise music as Pulsatile Tinnitus.

And finally, this list wouldn't be complete without the queen of the famed Japanoise genre: Yasuko Onuki, also known as YAKO. Together with guitarist Ichirou Agata, (aka AGATA,) she formed Melt-Banana in 1992, and the duo haven't stopped performing together since. They have released 11 albums total, and 23 EPs, not counting their endless compilation appearances, with their latest release being a 2015 split with Indonesian experimental band Senyawa. Touring almost nonstop since their inception (their nearest upcoming dates are in France and Germany,) this makes them one of the longest-lasting and hardest working bands in the noise genre, something their incredibly dedicated worldwide fanbase speaks to.