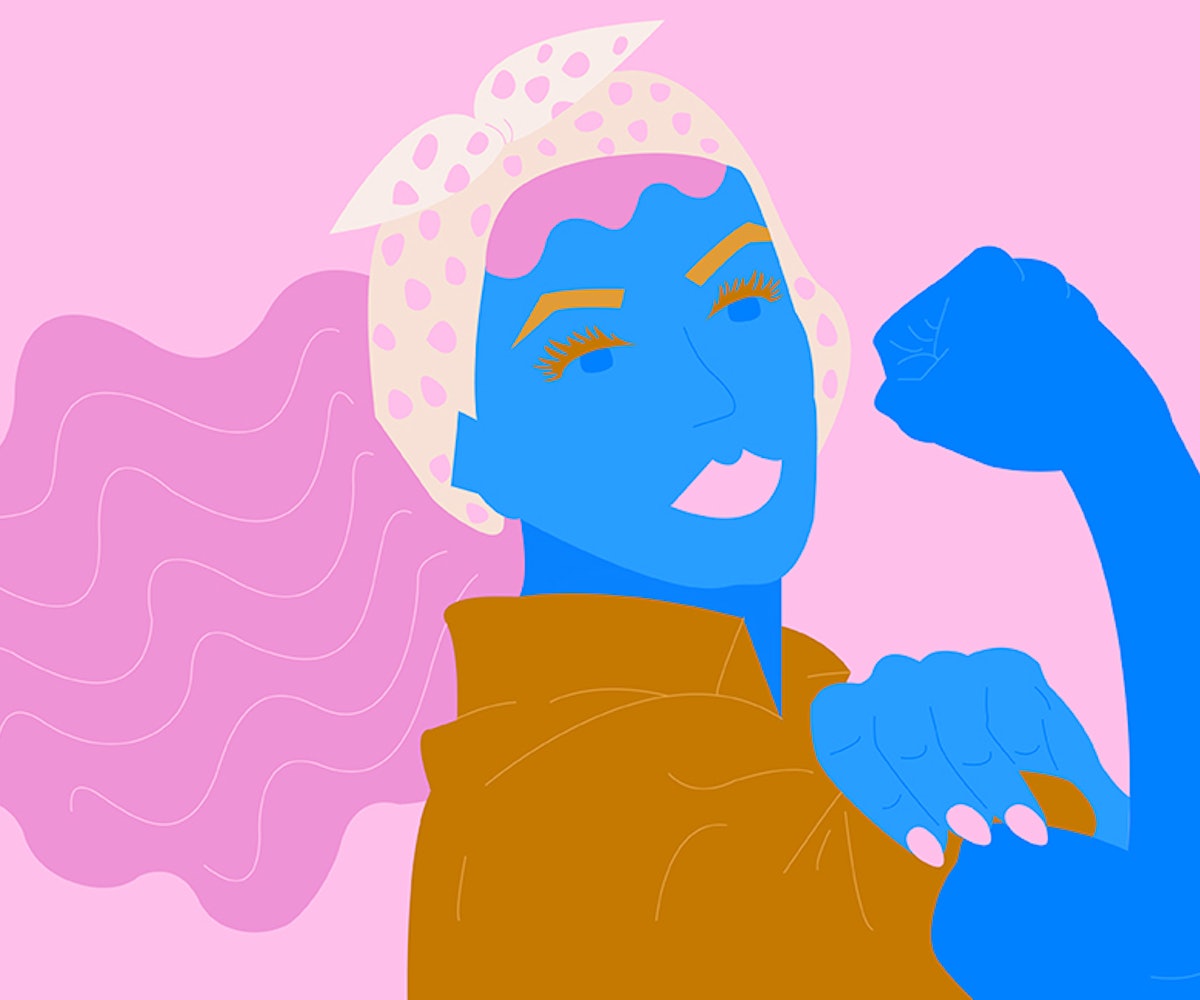 “Women are operating in a business world we did not create,” Felena Hanson, founder and CEO of Hera Hub, a female-focused coworking space that opened in San Diego in 2011, told me over the phone. Hanson said that while women are born collaborators, traditionally competitive workplaces can devalue connection and collaboration. She intentionally designed Hera Hub to operate differently. “It's not a place to network,” she explained. “It's a place to be part of a bigger movement.”

You could say that Hera Hub, one of the first female-focused coworking spaces in the country, is itself part of a bigger movement. In the past seven years, other spaces like it have cropped up all over the country: Paper Dolls in Los Angeles, RISE Collaborative Workspace in St. Louis, and The Wing, with its infamous no-men-allowed policy, which started in New York, and which has announced expansion to Washington, D.C., Los Angeles, London, Seattle, San Francisco, and Toronto, thanks to a $32 million investment from WeWork.

While The Wing’s millennial pink walls and color-coded bookshelves—featuring only women-authored books—have made huge waves in New York and on Instagram, Hanson had harnessed the appeal of coworking without tech bros in SoCal a decade ago. She ditched ping-pong tables, cubicles, and concrete floors in favor of soft lighting, open workspaces, and a collaborative community. Hera Hub did something much more radical than just offer women comfortable spaces to work sans dudes. Hanson’s coworking space, and the sites it would inspire across the country, also provided programming to help women start and run successful businesses, connect with other women like them, and build social capital.

“Having a space with a community of almost 200 members with a vast amount of social capital is where you're going to see the real impact and create the pipeline for success,” says Stacy Taubman, the founder of RISE Collaborative Workspace, which opened last year in St. Louis. She spoke with me on her drive back from Denver, where RISE may open a potential sister site.

But, as with all membership-only spaces, there is the matter of cost—and access. The Wing will set you back $250 per month, about average for these spaces (though a membership at one of the many WeWork locations in New York City could run you $450). However, attempts are made to be economically inclusive; in November, The New York Times reported that Wing co-founders Audrey Gelman and Lauren Kassan plan to offer scholarships beginning this year. This is something Taubman is working on, too. RISE offers trade memberships, as well as scholarships, via its nonprofit.

In late March, The Wing also attracted the attention of the New York Human Rights Commission, which opened an investigation into its membership policies. The Wing’s legal representation has pushed back against this characterization in the press, calling the investigation a “conversation” in The New York Times. Still in its earliest days, the investigation has raised both the ire of Wing members on social media (#IStandwithTheWing) and support from legal groups like NYCLU, the New York arm of the American Civil Liberties Union, which cites concerns about potential discrimination against gender-nonbinary and gender-nonconforming people and raises pertinent questions about how female-exclusive spaces intersect with the LGBTQ+ community. The Wing, for example, features trans women like model and actress Hari Nef in its promotional materials. Hera Hub states that, while the coworking space is “female-focused,” it is not exclusive to women (its materials don’t mention gender identity). RISE Collaborative’s membership language is phrased similarly.

Investigations notwithstanding, granting access to those who don’t otherwise easily have it is what these spaces are all about. At a foundational level, female-focused coworking spaces and social clubs address the imbalance that women experience in the workplace. And, in their best form, they can also be an intersectional endeavor to expand the reach of institutional wealth and knowledge closely safeguarded by white men.

RISE member Nicci Roach tells me how important access to women-focused spaces, with their wealth of tangible and intangible resources, is for her. “I’m a woman of color, and we have different barriers that we are fighting through,” said Roach. “I believe that our emotional side, that psychological side, gets chiseled away a little faster than those who are not of color,” she added. “If I have my mind right, and my emotions in check, I can go out and move mountains. But if that's off, and I’m not centered, then you can give me so many resources, and I can still not make it.”

With any number of obstacles in their way, it’s no wonder that entrepreneurial women want access to professional spaces of their own. Women have agitated for generations to change economic and social policies that disproportionately favor men—in fact, says Alexis Coe, in-house historian at The Wing, it’s part of the history of the social club.

“It was a space that women turned to when they were excluded,” said Coe of the first social clubs founded in New York, right after the Civil War. By the ‘20s and ‘30s, they were also the locus of reform work, including the “social welfare institutions that were nonexistent to black communities,” she added.

Our current period of backlash against systemic sexism is a stark reminder of how far we still have to go to achieve safety and equality in the workplace. The #MeToo movement has highlighted how almost every industry fails to adequately address sexual harassment, while data about the gender pay gap remains grim. White women only earned 83 percent to the male dollar in 2015, and the numbers are far worse for women of color.

Even if women blaze past these stumbling blocks, “lean in” at work, and climb the corporate ladder, they become dispirited because a system built to favor white men sets them up to fail—or stagnate. As for benefits like paid maternity leave or on-site childcare? The mandatory support for new working parents in countries like France and the U.K. is basically nonexistent in America unless you’re an elite corporate worker. (Interestingly, there’s a coworking solution for this, too—in Columbia, Missouri, Amanda Quick recently started The Hatchery, a workspace for parents that provides on-site childcare.)

While female-focused coworking spaces and networking communities are springing up in order to address the structural disadvantages women still face in business and the economy at large, they also might be able to tell us something about how to build a better, more inclusive work culture from the ground up. Unlike corporate environments, coworking spaces neutralize the idea of competition and create opportunities for collaboration, much as Hanson envisioned when she started Hera Hub. Among all the women I spoke to, the idea of collaboration was a prominent thread, the magic quality that made their respective communities different from working alone or in a traditional office place. Taubman says this atmosphere fosters “atta girl” moments that can build confidence; Hanson pins it on a working environment that invites meaningful connection.

This environment ultimately helped Nichole MacDonald, a Hera Hub member, take her handbag design from initial concept to a $2.8 million company. “I went through a business incubator with a five-week program to put together my business plan,” MacDonald said of her experiences. “I had a clearer vision of my product and used that time as a focus group.” She also met a fellow Hera Hub member and life coach—who wound up to be her very first investor. For contract workers and solo business owners, moments and connections like these can be especially powerful, and a supportive network can be the deciding factor between a good and bad year, a successful or failed business.

Social capital is crucial for women of color, the fastest growing population of business owners in America. “Those resources are not just tangible things,” said Roach, who recently left her job to work full-time on Mosaic Ceiling, a nonprofit dedicated to driving social change for women of color. “The intangible, I think, is what's really the secret ingredient to this collaborative workspace. The confidence. The pat on the back. The hugs.”

Of course, not every organization can afford collaborative flatness all the time. Businesses need decision-making structures to get things done and hold employees accountable. But a more collaborative workplace culture might look like one in which women can speak up in meetings without men talking over them, in which they are regularly acknowledged and promoted for their work. After all, you collaborate with your peers—your social equals—but you compete with someone you want to best—out of a promotion, a project, or a customer—even an idea. Add toxic gender and racial relations into the mix, and it’s no wonder work environments of all stripes grind women down.

Policy can help guide culture in the right direction, but culture only shifts when individuals in power make intentional change. Roach, a former academic administrator in charge of diversity and inclusion at her institution, saw this constantly in conversations about diversifying workplaces. There’s lots of attention paid to increasing the numbers of diverse candidates, she says, but less attention paid to building supportive relationships once those candidates arrive.

“So often, we get so lost trying to remain in compliance. Trying to check the box,” Roach told me. “But we never get to the point where we focus on the culture.”

Decision-makers must devote time and resources to intentionally changing what happens every day in the workplace. This might mean, at some point, letting men in on the lessons learned in female-focused coworking spaces. Both Hanson and Taubman stress that they’re interested in having these conversations with the male members and visitors who use their respective spaces.

“I don't believe change happens without conversation,” Taubman said. “There's a lot of men out there that are part of the solution and want to be part of the solution. They may or may not have all the tools necessary to do that, but they're just as eager to see the change as we are.”

NEXT UP
Life
Netflix Dropped A Sneak Peek Of Bridgerton Season 3
Life
Alison Roman Is Getting Her Own Cooking Show
Life
On Repeat: Vaquera’s Away Collaboration Is Brought To You By Britney Spears B-Sides
Life
Jennifer Coolidge Checks Back Into ‘The White Lotus’