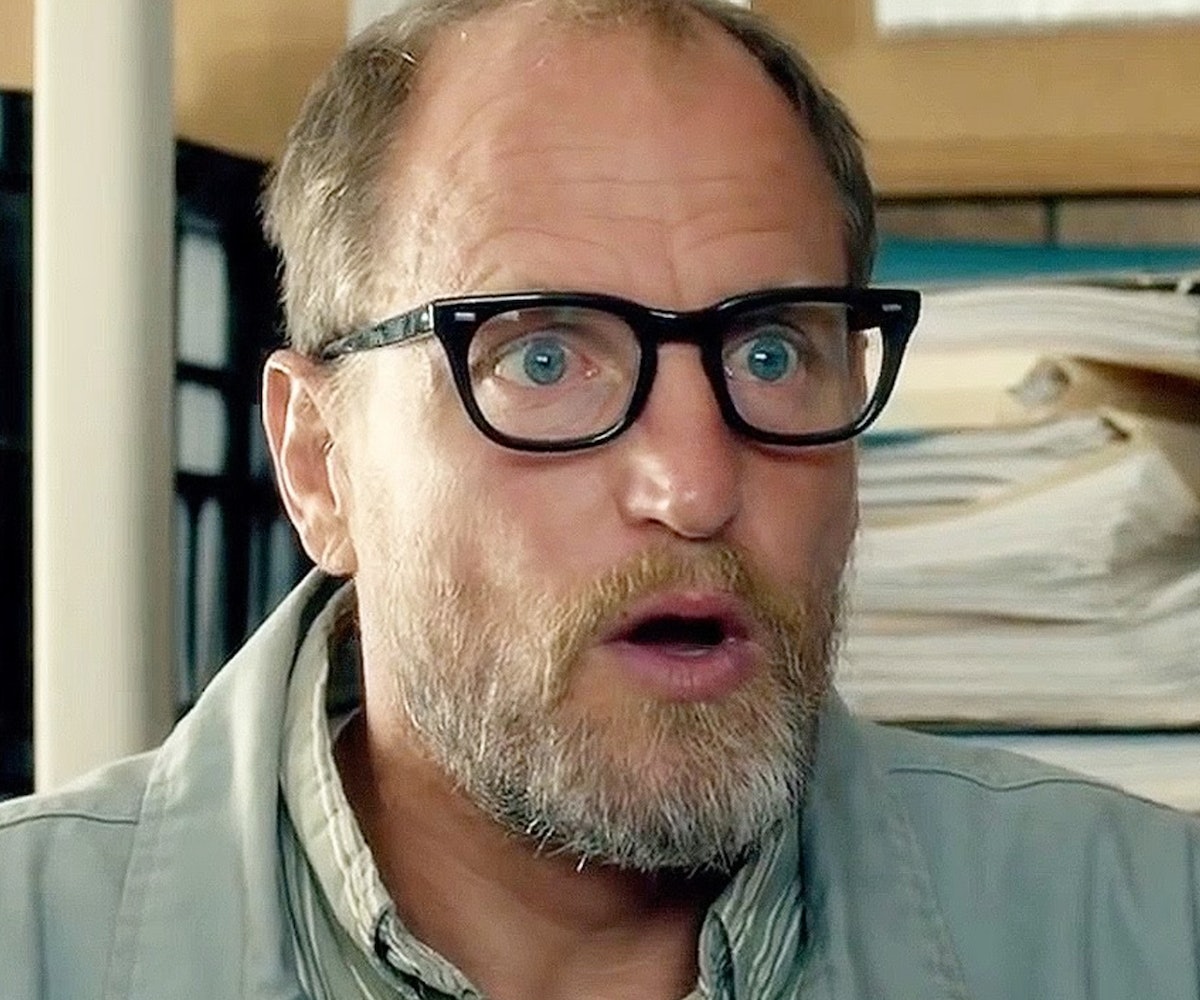 When I walk into the plush hotel room in which I have been told Woody Harrelson is waiting to speak with me, at first, I don’t see him. This is because I foolishly direct my gaze to the table and chairs by the window, and not to the king-size bed against the opposite wall, where a stocking-footed Harrelson patiently sits cross-legged on top of the covers. Not wanting to be the weird one, I kick off my shoes and tentatively join him. Over the course of our conversation, somewhere around the point where Harrelson shifts into a supine reclining position like a patient in psychoanalysis, I realize that this is no interview mind game and that the man genuinely loves laying down.

You get the sense he’d rather be on some stretch of beach, but he assures me early on that he enjoys interviews, and he conducts himself like it too. Harrelson speaks with the leisurely pace of someone who’s spent a solid portion of his lifetime waking hours stoned to the bone, but he’s perfectly lucid and intelligent as he holds court on everything from experimental theater to the shackles of compulsory politeness. He trails off on the occasional digression, but it always ends on a little nugget of post-hippie wisdom. He's a man of principle, not unlike the stubborn, aging eccentric Wilson that Harrelson portrays in the new film adaptation of Daniel Clowes' graphic novel of the same name. (Though it's hard to imagine Harrelson screaming in frustration at a bus passenger lost in his earbuds.) Put simply, he appears comfortable, and the bed probably has little to do with it.

What’d you see in the character of Wilson that you wanted to be a part of?

"Well, there was a great script. Found the original graphic novel really compelling as well. I don’t read them that much, but this one in particular got me. It’s a guy who, at first glance, doesn’t seem to have anything worth liking. He says things, and you think it’s for the sake of being offensive, but you find out he’s just got this terrible honesty. If people really said, like, what they think of an ugly dress, it’d sound impolite. I don’t lie ever, but I’m gonna say it looks lovely if you ask me about the dress. So I noticed when I was playing the character, I’d say more shit in my own life that I would have otherwise only thought. There was a little danger in playing this role—it’s incredible how many things you can say that’ll land you in hot water."

Did being a father yourself have any effect on how you approached this role, and how it interacts with the idea of parenthood?

"From the relationship on the page, it seemed pretty clear to me how to play it. And once I met Isabella, we had a good connection. It was really cool—the very first day, we were in the car driving out and improvising. I always feel for someone who’s not gonna be used to that, and she was sixteen at the time, so I’m wondering how she’ll handle it. And she’s fucking amazing. She just absolutely brought it. It was like working with Lizzy Caplan on the Now You See Me sequel, where we all knew each other from the first movie and she was new. There was nothing to worry about, she just came in swinging for the fences."

In terms of scale and scope, a production like Wilson is an entirely different operation than your next scheduled release, the new Planet of the Apes movie. Do you prefer one mode of moviemaking to the other?

"It’s all interesting stuff. I dunno if I can even tell you this, but—I’m working on the new Han Solo movie, and I was bitching because I had to work on some second unit thing, hanging off a train in a harness with a wind machine blowing me every damn way. Gotta lift the gun up to a specific height, everything’s so specific, you get the picture. I was complaining, in my own way, and the woman I was talking to said, “Get a grip, I’m in retail.” I was so glad she said that, because what right did I have to whine? I liked doing Planet of the Apes, I think it’s gonna turn out great, it’s all good. And yet, there’s something about doing a movie like this—almost an indie, Fox Searchlight’s behind it, but still—there are more scenes I feel like I can dig into. Big movies, you’ll do 40 takes of lifting up a cup, or looking to the right. This was a more nourishing experience."

You’re involved with the theatre as well, which is probably the purest distillation of what you’re describing here. For you, is working onstage a way to recharge your creative batteries?

"Yeah, though I haven’t done it as much lately. I actually wrote a script a while ago and dusted it off to reread it the other day. I was like, 'Oh my god, this is absolutely terrible.' But it’s a first draft, so I wouldn’t expect anything else. I did this movie Lost in London that was my merging of theatre and film. Shot it in real time, live-streamed it into cinemas. 14 locations, 30 actors, all live. At first I thought to myself that I’d shoot it in 99 minutes, but then I realized that’s not honest theatre because it doesn’t have that high-wire feeling. I still want to do a home release. I’m glad to have done that, though I don’t think I’d ever want to do it again as a director. Too much stress, and I don’t like stress. [Laughs] I like to be chill. You ever do theatre?"

In high school, yeah. I remember that feeling of adrenaline and terror.

"I thought so. You ever written a play?"

You know, me and my best friend wrote a 40-minute play when we were teenagers. Thinking back on it, I’m totally mortified. You ever feel self-conscious when watching your own stuff?

"Oh, yeah. I see it and think, 'Ah, I could’ve been so much better than that. I could’ve made it more real.' And way to take the focus off your thing, by the way. But yeah, you want to make it both honest and interesting, those are your two things. Because you can make it honest, but leave it boring as shit. Real life can be boring, so there’s a necessity to not stop there. People in life have little bits of character, a tic or something, that makes them interesting to watch. You can throw in touches like that to keep a character engaging.

"My sophomore year of college, I was in a play, and I wasn’t very good. I had a little part, and I felt so boring, so I talked to the lead and he told me, 'If you don’t like what you’re doing, change it. Change how you’re talking or dressing or walking.' So the night of the show came, and for my first entrance, I was supposed to enter upstage left, stare at this character, and walk off downstage. I had figured out how to get an ovation with this. The other actors said, 'What’d you do?' and I said to them, 'I dunno, but I’m doing it again tomorrow!' That was around the time I really started thinking about being an actor."

If you don’t mind talking politics—are you feeling pessimistic about where America is at right now?

"I’d say it’s business as usual, because politicians are just businessmen working for bigger businessmen. And now there’s no hiding anything—gotta get the pipelines, more money to the military-industrial complex—Traitor of the Year is not enough for these fucking guys. Everybody’s getting paid, and the people are paying for it. I don’t understand how there’s a segment of the population, a big section, that thinks they’re being represented when they’re absolutely not. Nobody’s represented unless they have a lot of money.

"I had dinner with Trump one time, Forbes thing. I remember thinking, ‘This is the most narcissistic man I’ve ever met.’ And I literally had to excuse myself from the table in the middle of dinner, go outside, and smoke a joint just to take the edge off of being around him. It was a brutal thing."

How do you keep from turning cynical or bitter when things seem to be getting worse all the time?

"Laughing. All the little jokes people make about him. The pictures of him and Putin hanging out, that stuff makes me laugh."