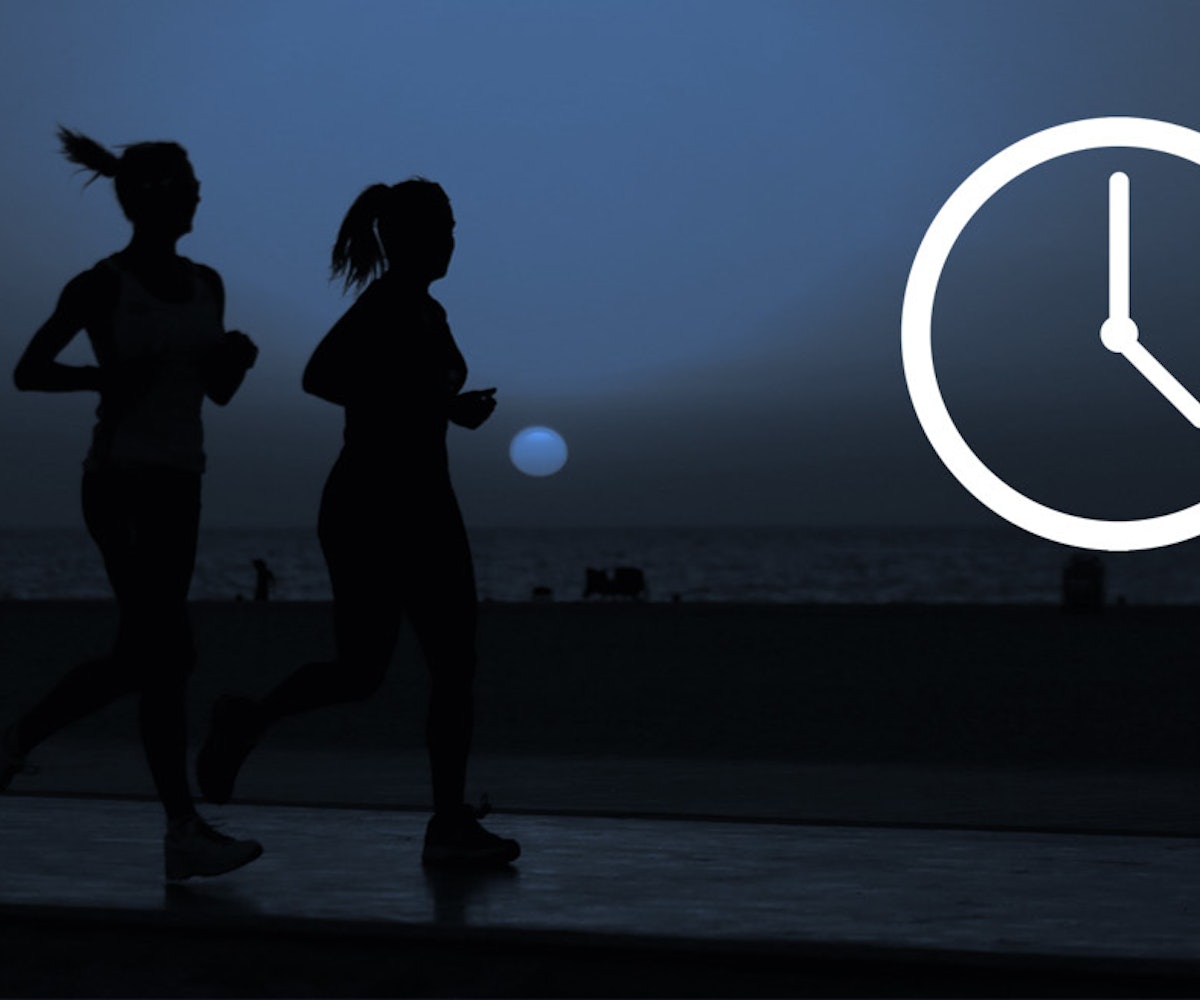 No one wants to be outside miles from home when the sun sets. It’s a spooky time to be running, and that’s not even accounting for any danger potential. (Which does exist, so stay safe!) But, with almost no daylight outside of the 9-to-5 hours when we’re usually stuck in the office, when’s a girl to get a workout in? That's the reasoning anyway, and the excuse that most people give when they abandon their workout routines come winter: It’s too dark. But—and I hate to be the one to say it—it’s also kind of a lazy excuse.

So, how do we get around it? I’ve got a few ideas.

First, the obvious: If you absolutely can’t or won’t run or ride your bike outside when it’s dark, swap your trail run for the treadmill. That’s boring and kind of the worst, but rather than trying to do your normal steady pace on the treadmill for an hour, make it fun by scaling down the time, but increasing the intensity. So rather than an hour-long slog, do 30 minutes, but every minute or two, increase your speed or up the incline for 10 to 20 seconds (or until you need to lower it). Bonus points if you can run or ride to the gym while it’s still light out, and then use public transit to get home.

Head to the Fitness Loop

Most towns have one of these, and you’ve likely seen a senior citizen or two making their way around the short circuit that has several stations that look like kiddie equipment but have goofy exercises associated with them. If you can jog or even drive to one of these parks, you can make an amazing circuit workout that will have you hitting cardio and strength training goals in under 30 minutes. Just put on a rocking playlist, do a couple minutes of warm-up jogging or walking, then pick up the pace, running between the exercises (typically things like pull-ups or dead hangs, rows, calf raises, and awkward sit-up-styled routines).

The buddy system will keep you much more accountable—when it’s dark early, it’s tempting to hop into bed or curl up on the couch rather than go to the gym or get out for a run. The "find a buddy" cliche is cliche for a reason: it really, really works. It’s hard to bunker down for a Netflix marathon when you know your best friend is spinning away at the gym. If you really do hate the idea of braving the cold for your workout, enlist a roommate or your significant other to do workout videos with you. (A subscription service or app like Sworkit or YogaGlo is great for this—and fun to do solo as well!)

Too many people make goals all about distance. Sure, a marathon sounds cool. But what about taking your 5K and making it faster, instead? Similar to the aforementioned treadmill workout, you can condense your typical hour (or even your typical 30-minute) run into something faster—and harder. Thirty seconds on, 30 seconds off is a great way to burn through a short workout and feel like you just ran a marathon, and it’s super-simple. Go hard—where you’re out of breath by the end—for 30 seconds, then go easy—jogging or walking—for 30. Repeat as needed. Make sure you do a five-minute warm-up and cool-down, though.

Run in the Dark… Safely

Honestly, when it’s dark at 4pm, it’s hard to say that’s when it’s time to call it a day. Plenty of people are still working out after dusk when the lights are going down early. If you’re not nervous about being out at night, invest in some reflective gear and a headlamp, and map out a well-lit route that makes you feel safe and comfortable and that you know super-well. Running at night does have safety issues, obviously, since you’re less visible to cars. Skip the headphones so that you can hear cars coming up behind you and carry your (well-charged) phone at all times.