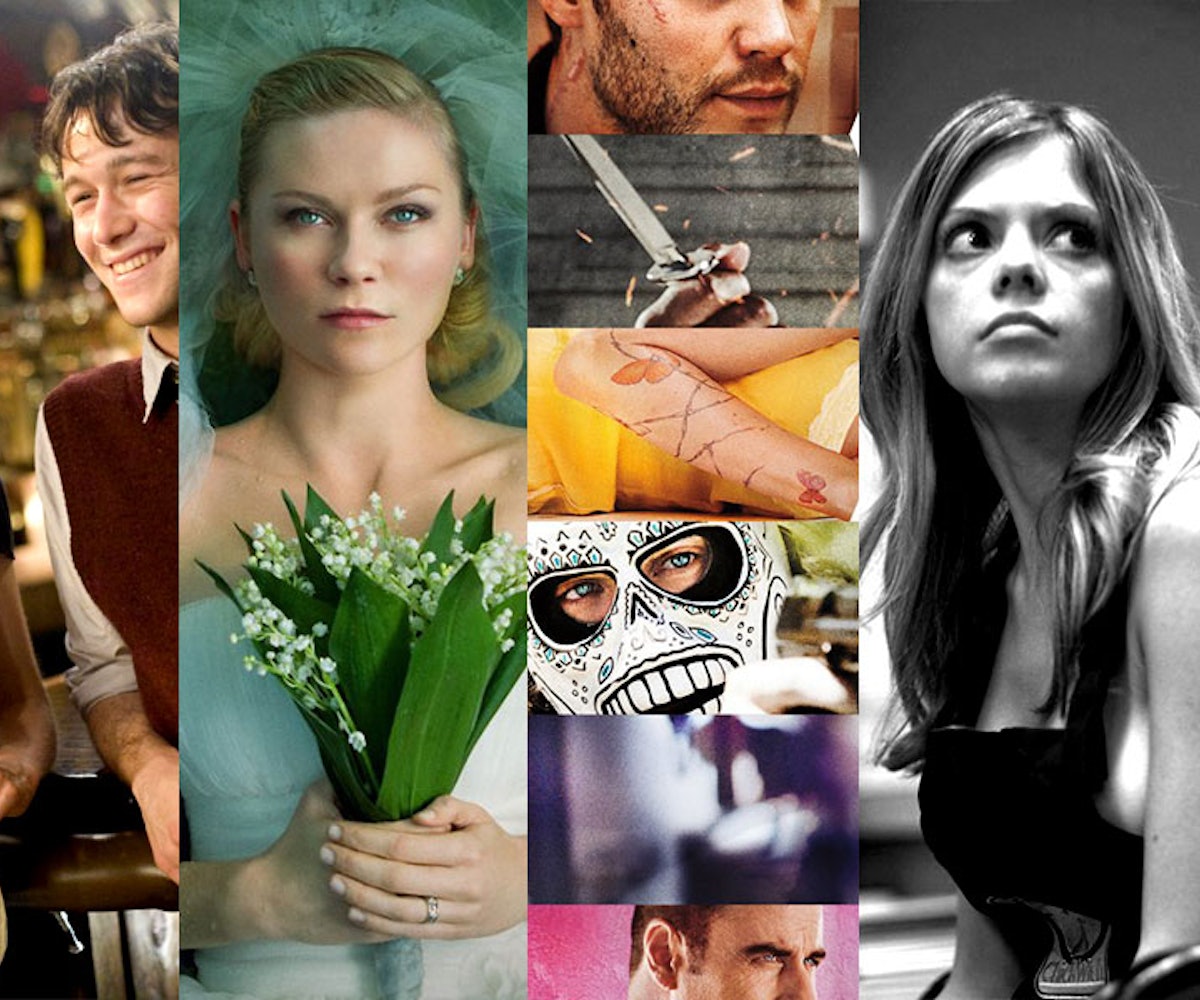 In the Seinfeld episode "The Raincoats," Newman spies Jerry making-out with his date during Schindler's List. "A more offensive spectacle I cannot recall," proclaims Newman. That is because, well, an emotionally crippling story about the Holocaust may not be the best date movie. Ahead, we talk about movies that didn't only ruin dates, but in some cases, ruined entire relationships. No, we didn't list movies that are filled with anxiety and remorse (because we all know what those movies are), but movies that came along at the wrong time, in the right way, to leave us (and our dates) reeling. Oof. Oof all around.

I was taken to the premiere of the film Compliance by a guy who worked on the movie. He failed to mention the storyline to me in advance. The docudrama, which is set in a fast food joint, follows a young cashier who ends up in a bizarre sexual-violation situation where she gets strip-searched against her will by her middle-aged female manager. It was a super uncomfortable movie, and I was cringing the entire time. People shouted at the screen and walked out of the theater when things really began to heat up. I couldn't speak for a while afterward because I was still soaking it all up.

I nearly drank a whole bottle of red wine by myself after the screening, and couldn't bear the thought of this guy coming close to me at all. He didn't follow up with me because I gave him "friend vibes" after that...

My first-ever "real love" relationship quickly fell to pieces after staying up too late in his dorm room watching Melancholia on his tiny laptop. The two-and-a-half hours crept along at a dismal pace. I could feel the spark (if there ever was one, really) between us begin to fade the closer the planet that was hurtling toward Earth got to the sad but very good looking people of the film. As Earth was annihilated, so too was any resemblance of my relationship. He broke up with me a week later over "irreconcilable differences."

I was working at the front desk of the Standard Hotel in downtown Los Angeles. In the lobby there was a Rudy's barbershop because André Balazs thinks stuff like that is hip. Three time a week a very attractive girl named Corrine (sp?) cut hair there. The wall between the lobby and the barbershop is made of glass and the cutters stand with their back[sides] to it. She would catch me occasionally looking at her in the reflection from the mirror she was facing.

I asked her out, and not knowing really anything about her, I figured I could do the least harm by going to a movie in Los Feliz and getting some grub and a drink at the diner across the street afterward.

The Los Feliz 3 is a tiny theater and the choices were meager. I love Lars Von Trier and I was going to see Melancholia at some point, but as it happens, that point should not have been my first date with an Armenian girl from Glendale who had just gone through a troubling breakup.

Immediately after the movie she pulled out an American Spirit cigarette, looked me right in the face, and asked, "Why did you take me to that movie." I said, "You didn't like it?"

Early on in a relationship, when we were all loved-up and super into each other—though, both of us were respectively going through a dark period—my date and I went to see this cool new Michelle Williams/Ryan Gosling movie that we thought might appeal to our indie sensibilities. Of course, this movie turned out to be Blue Valentine, which is an incredibly depressing indictment of relationships and the way in which people grow apart. It's a brutal movie, in which love certainly does not survive.

After the movie, we sat on the steps of the theater, quietly staring at our shoes, feeling the futility at any attempt at intimacy. Basically, we both thought, "There's no point in this, in anything, anymore," and broke up shortly thereafter.

I saw Savages with an old boyfriend and he ended things shortly after. He probably didn't understand why I loved it, or really understood my appreciation for gory movies with female drug lords and Benicio del Toro. Oh, and Taylor Kitsch made an excellent Mary Jane smuggler.

If the amount of love being distributed in your relationship is uneven, (500) Days of Summer will shine a nasty light on it. When my now ex-girlfriend went to see it without me, she texted me as soon as the credits began to roll': "We should break up." She saw herself as the Joseph Gordon-Levitt character, pining after an emotionally unavailable girlfriend. She was JGL, my ex told me, and I was Zooey Deschanel. Best compliment I've ever gotten.

The Curious Case Of Benjamin Button (2008)

When The Curious Case of Benjamin Button first came out, I was dating my second college boyfriend and we went to see it together. I must have been going through growing pains at the time, because I started bawling as soon as the film started and couldn't stop until the end. I just felt so small and useless in the grand scheme of things. (The movie's premise and tagline is: "Life can only be understood backward. It must be lived forward.") By the time we left the theater I had cried so much that my whole face was swollen, and I could barely see the street. He asked me if everything was OK, and we had a serious conversation. We parted ways not on that day but shortly after.