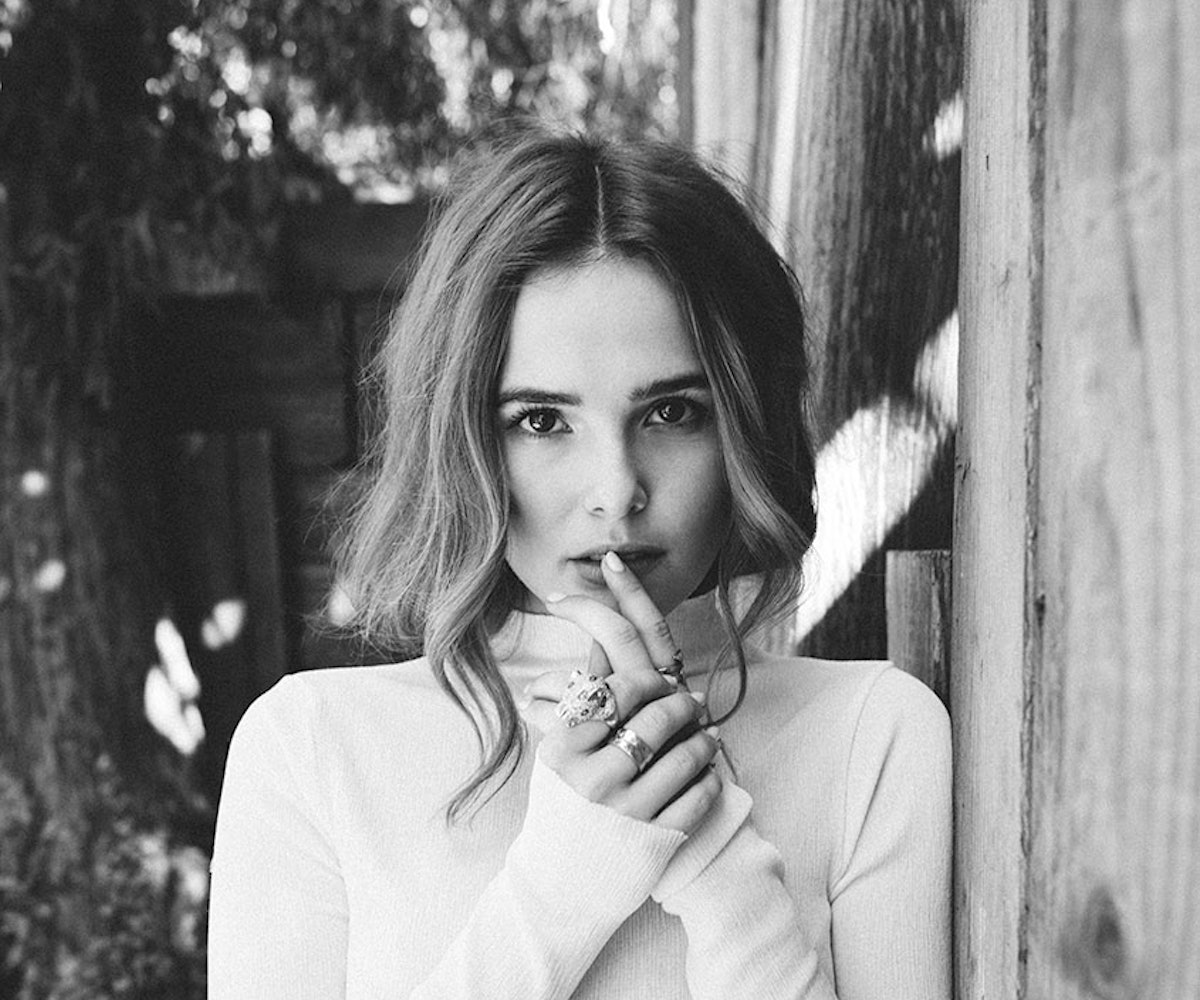 Zoey Deutch grew up on a ranch with her mom, dad, and older sister. There were dogs, cats, birds, fish, chickens, horses she rode “badly,” and even a tortoise named Tortuga. It was the idyllic life of a country girl—except that this oasis sits smack dab in the middle of Los Angeles, and her family members are all Hollywood players.

“I don’t wanna answer that! C’mon! More mom questions?” exclaims Deutch, glowering at me with smoky eyes. It’s true, I’m peppering her with questions about her mother, Lea Thompson, who has starred in tons of movies, not least of which is the all-American sci-fi comedy Back to the Future. “Not a problem,” I say. “Let’s switch gears.” I ask her about her dad, Howard Deutch, who has directed many TV shows and films, including the generational coming-of-age flick Pretty in Pink. Then I start in on her boyfriend, Avan Jogia, a former ABC Family heartthrob and star of the recent Spike miniseries Tut. She shifts in her seat and says, “I’m not falling for that trap.”

As she shouldn’t. It’s not fair to focus on her famous relations, because the 21-year-old Deutch is on the precipice of her own major moment, with roles in both massive studio pictures and critically acclaimed indie projects. There is, for example, the upcoming Richard Linklater-directed Everybody Wants Some, and the mainstream Lionsgate comedy Dirty Grandpa, in which she appears alongside Zac Efron and Robert De Niro. But it’s the movie she’s currently filming at the time of our interview that Deutch is most excited about: The Year of Spectacular Men, written by and starring her sister Madelyn, and featuring her mom, her boyfriend, and herself.

“It’s my favorite experience I’ve ever had shooting a film,” she says, grinning widely. “I’ve never laughed as much at work. There was a moment in time where it was nerve-racking—there’s definite potential to hate each other on set. You’re usually the toughest and least kind to those you love the most. But it’s going amazingly, and we’re making something super special.”

Deutch says her time playing Shadia, an environmentally conscious hippie chick, on the set of Dirty Grandpa was rewarding as well, if only because she can now say she has starred opposite Hollywood’s leading beefcake (and as his love interest, no less). “I was slightly joking,” she suggests mischievously, “but I was saying I should begin every interview with, ‘I will save you 20 minutes of your life and just tell you: Yeah, I kiss Zac Efron in Dirty Grandpa, and yes, it was fine. Yay.’”

Yet inevitable Efron-smooching interview questions still won’t top the most awkward moment of the Dirty Grandpa experience; that honor is reserved for the memory of an impromptu cast karaoke night. “It was a day after Zac Efron and I had filmed a karaoke scene in the movie, so we were like, ‘Let’s go to karaoke!’” Deutch recalls of one evening while on location in Tybee Island, Georgia. “It was me, Aubrey [Plaza], and a couple other people who happened to be comedians. They all did hilarious karaoke, and I chose ‘Listen’ from Dreamgirls. Not only did no one laugh, but it was so uncomfortable that when I came back to the table, none of them even made fun of me—which was how I knew I had really embarrassed myself. [Turns out] the point of karaoke is not to sing well, it’s to do something goofy. And I sang good in a bad way.”

Her interaction with Robert De Niro, who is notoriously tough on young actors who approach him, was notably more successful. “He was very warm and kind to me,” she says. “My great-uncle [veteran actor Robert Walden] and him both did [the Roger Corman-directed Bloody Mama from 1970] together, so that was a very weird connection, and he had all

these funny stories about my uncle being a freeloader.”

After filming Everybody Wants Some, Deutch can also add Linklater to the list of legends she has had the opportunity to work with. She recalls with admiration an insight the acclaimed director shared about this follow-up to his Oscar-nominated Boyhood, explaining that the movie actually has more in common with Dazed and Confused, his 1993 breakout cult classic. “Rick [Linklater] was calling it a spiritual sequel to Dazed and Confused,” says Deutch. “Everybody Wants Some is not necessarily a super-plot-driven film; it’s more of an experience that takes place over a couple days. I play an aspiring actress named Beverly who is into politics and music and art, and is a very passionate person, which is in juxtaposition to the lead character, a baseball player. It’s showing two sides of the spectrum—there are sports and the arts in college in Texas.”

With stardom (and the end of our conversation) impending, I ask Deutch to reflect on what drove her to become an actor, which naturally leads back to how much of an influence her parents had on her getting into the field. “They encouraged me to do whatever I wanted to do,” she says, now taking my prying in stride. “Nature versus nurture—I think it’s a little bit of both. It’s hard to say that I would be doing this if I hadn’t grown up in it, but it’s also hard to say that I wouldn’t, because I do feel that it clicks. It makes me happy.”

Top by H&M, skirt  by sea, jaguar ring by Effy Jewelry, all other rings by Melinda Maria, Cuff by Capwell + Co.