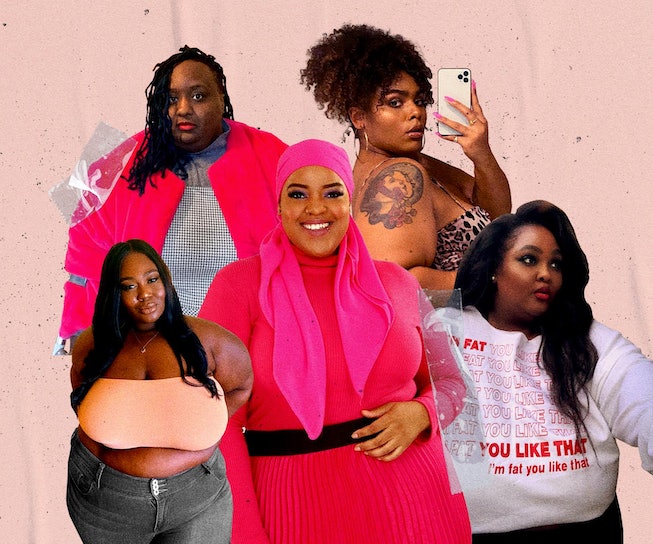 For those living in marginalized bodies, the simple fact of their existence is political. Their demeanor, voice, behavior — all of it cannot be separated from how their bodies and various intersections are policed. That’s especially true for Black women.

As the body positivity movement becomes continuously commercialized, many are speaking out to help their communities heal and progress in realistic ways. Five of these women are Kendra Austin, Leah Vernon, Saucyé West, Simone Mariposa, and Imani Barbarin.

These are their stories, and the messages they want you to know.

You’ve likely seen Kendra Austin’s tweets reposted on Instagram. Maybe you’ve seen her extraordinary modeling work for brands like Milk Makeup and Glossier. Beyond all of that is a fat, Black, biracial, queer woman trying to heal while helping others do the same.

Austin, 27, moved to New York City three years ago after “lighting my life on fire, because it very much echoed a time and a space where I was not honoring myself, and I did not believe that I was worthy of being the star in my own life.”

Originally from San Diego, Austin never quite felt like there was enough room for her, no matter where she went. Confined by her various identities rather than empowered by them, much of her adolescence was centered on trying to achieve greatness wherever possible, whether serving as line leader as a child or being voted most likely to succeed in high school. That all came crashing down in college when, for the first time, Austin could no longer escape her identity.

“People literally hated me because of the body that I was in because of my identities,” she explains. “I felt really lost and lonely, and that ultimately resulted in me losing about 130 pounds when I was 19 through an eating disorder.”

Post-college, Austin found herself in, ironically enough, Austin, Texas, working as a server. Still lost, she reminisced back to her adolescence, reminded of the little girl who would write stories, paint pictures, and thrive in her creativity. She knew that reconnecting with that soul would be the key to healing and finding happiness, so she took the leap, and has never looked back.

“I knew that I wanted to be seen for making an impact, and for helping other people see themselves. That's all I cared about.”

Upon moving to New York, Austin immersed herself in community, longing to connect with those who could relate to her various intersectionalities. Advocacy then came naturally.

Looking forward, Austin plans to continue to help herself and others around her heal their personal body relationships, allowing them to come into their own power and claim space that they’ve long believed they don’t deserve. Among the topics she continues to speak out about: the lack of conversation around biraciality, tokenizing Black voices as sources of education, and the notion that “I don't think identity politics are as important as self politics.”

“I want to exist in a world where fat, Black, queer, women have an opportunity to just simply be, and to be honored as full and complete human beings,” she says. “To be able to be seen, not in their trauma, not in their suffering, but in their glory and victory, of stepping into exactly who they are. And for that person to be cherished in growth, and not as a static human being, and not in service of a huge agenda in identity politics.”

Model and activist Leah Vernon, who now lives in New York City, hails from Detroit, where “you just didn’t see fat people winning at all.” Her battle with body dysphoria and mental illness began early on, compacted by the reigns of being Muslim, which presented “the inability to be your true self while trying to fit into the 'good Muslim girl' stereotype.”

Marginalized by these different intersections, Vernon turned to Instagram, where she quickly stumbled upon the plus-size-model hashtag. “I saw women living their best lives: Big boobs, big ass, all out, getting the bag, dressing the way they wanted to, saying what they wanted to. I’d never seen that in my life, and I needed to be a part of it.”

Vernon’s perspective on being a fat, Black, Muslim set her apart amongst the digital crowd, allowing her to carve a specific yet still relatable niche for herself within the plus-size community. Her candor on topics including white supremacy, health trolling, and “the art of not giving a f*ck,” as she puts it in a post describing her relationship to her religion, have elevated her voice to mainstream heights.

“In society today, whether Muslim or Christianity or anything else, we’ve all had these issues where we're policing woman's body and we're using religion as a means to do so,” Vernon explains. “My body, my movements, my shape, and the way I wear my hijab have all been policed by Muslims, unfortunately. And it’s very, very hard that I choose to do what I want with my own body yet still ascribed to Islam.”

Much of that is explained in Vernon’s debut book, Unashamed: Musings of a Fat, Black Muslim. In the future, she plans to continue to write books and expand on her international modeling portfolio, as well as break into TV and film to tell the stories of women like her who have yet to get their time on the big screen.

“We’re still trying to just get fat leads in shows that don’t revolve around weight loss,” she explains, “so our voice is needed. I know it's gonna be hard to break into that, but I feel like I now have the tools to do it.”

At age 14, after battling an eating disorder, a young Saucyé West took a personal stand in reclaiming her body, vowing to find pride and solace within. Now, looking back, she can’t believe how radical that decision was.

“Fat liberation is political,” West explains. “I think that the body-positive movement, which was birthed from fat liberation, has become this squeaky clean, gentrified thing that many no longer can identify with.”

West’s platform is grounded in advocating for visibly fat, Black bodies, spurring conversations that often make her feel like “an outsider” from within the community. As the leaders of the body-positive movement remain white, racially ambiguous, and on the smaller side of the size spectrum, West has dedicated her voice to fighting for the bodies that remain unrepresented.

A topic West is particularly passionate about is the separation of health and respect when it comes to fat bodies. “Everyone pretty much thinks that the Black community invented diabetes,” she explains, pointing to the inescapable health trolling that happens offline, on top of the layers of medical fatphobia. “It’s such a jacked-up narrative. My health is not your business.”

Going forward, West will continue to merge activism and fashion, fighting for bodies above a size 20 and beyond to get the time, attention, access, and respect they deserve.

“We need to visibly show fashion on these sizes and, again, not on socially acceptable bodies, but show them on bodies that look like your average customer. Don’t Photoshop us, don't mess with our bodies — show them exactly the way they are. That can be like the smallest thing that you can do to show solidarity within this movement in fashion.”

Among the first social media users back in the day, Simone Mariposa is a pioneer in the online activism space. And despite changes to the digital scene, her voice and power have only intensified over the past decade.

“I really started to love the impact that I was making on different people and inspiring them to love their bodies,” Mariposa explains, “and to also accept the changes that come when their bodies grow. Because that's a different side of body-positive work that people don't really talk.”

Mariposa often lends her voice to the conversation around fetishizing fat bodies, as well as the dense topic of health, and how it intersects with the work of body-positive activists.

“When people talk about fatness, it's still under the guise of health or lack thereof. The medical industry is not only fatphobic, but is basically anti-Black, so the presumed lack of health is still a really big issue because there’s still this idea that people like me don’t deserve all the success.”

That message has led her to becoming a doula, specifically in efforts to assist Black mothers, knowing the increased rate of complications and mortality that they face in pregnancy. “There’s this automatic assumption that Black women are high-risk birth, simply because there's an ideology that fat bodies are automatically unhealthy, instead of understanding that health is relative,” she says.

She adds, “My goal as a doula is to use my passion for confidence and instill that in my clients because we are each in charge of our own bodies. If we accept that fact, we can implement that power when it comes to dealing with any medical professional. We need to be able to speak up and explain ourselves so that we can finally be heard and listened to.”

Born with cerebral palsy from the waist down, Imani Barbarin has explored the intersection of disability, race, and size in a profound way through her advocacy.

“Fat people are treated as if they’re choosing disability, and so ableism within fatphobia is incredibly prevalent,” Barbarin says. “For me, it manifested in people telling me that if I lost weight, I would be less disabled: I would walk better, I would have better opportunities, and people would treat me nicer.”

Barbarin brings up the topic of internalized ableism, which she explains is essentially turning stereotypes around disability in on one’s self. “It can manifest itself in overextending oneself because they believe that they should be overcoming the disability, because that's what society has told us that we need to be doing with disability. It can also manifest itself in not getting the medical care and not getting a diagnosis, because they're afraid that the stigma that comes with it is more dire than disability itself.”

She pushes against that notion, rejecting the societal viewpoint that victory is “overcoming” a disability. Because Barbarin is a human, full and complete, unneeding to overcome any struggle in order to prove her worth.

This topic has become prevalent since the start of the pandemic: As resources become scarce, “it’s those with disabilities who society turns to say, ‘We don’t need these people around.’ It’s literally like we have completely forgotten that we don’t exist, even as people have joined us in ranks as many are going to be left with disabilities because of COVID.”

The frightening situation at hand has only made Barbarin’s work that much more vital and timely. And going forward, she plans to continue to spread her advocacy as far as possible.

“We can do so much better by disabled people of color. And I want people to mean it when they say that.”

NEXT UP
Entertainment
See a First Look At Marisa Abela as Amy Winehouse In "Back to Black" Biopic
Beauty
12 Lunar New Year Beauty Releases To Ring In The Year Of The Rabbit
Culture
Caroline Polachek In KNWLS & More Party Photos You Missed
Entertainment
Samia On 'Honey' & Saying The Ugly Part Out Loud
Style + Culture, delivered straight to your inbox.