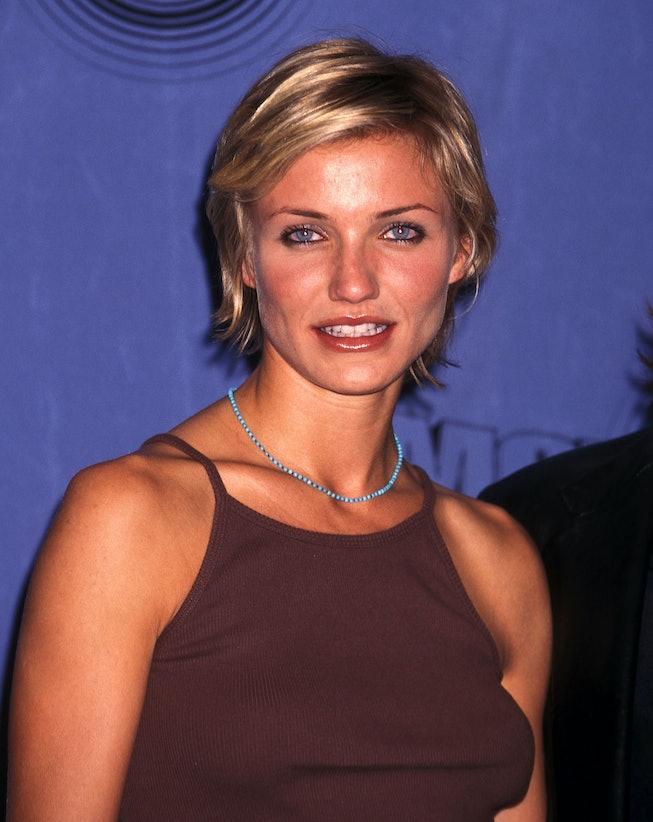 The ’90s gave us a number of hairstyles with influence spanning far beyond the original decade. Just think about, “the Rachel”, butterfly clips, and piecey bangs. However, the current revival mostly left out one of the most iconic hairstyles of the time— until now. Seen on the likes of Cameron Diaz in the mid ’90s, the “heartthrob bob” is a short, layered hairstyle that’s in between a longer, blunt bob cut and a pixie cut. It’s also a great option for those looking to grow out short hair, or if you’re transitioning out of a mullet with short layers and still want to maintain some shaggy shape.

Hairstylist Mara Roszak, who has worked with Emma Stone, Alana Haim, and Zoe Saldana, among many others, says the magic of the heartthrob bob is in its versatility. “We know the ’90’s vibes have been back for some time but this look is so nostalgic,” she told NYLON, even in a more modernized 2022 version. “I love how it walks an androgynous line,” adds Rosak. We can’t help but think it also calls to mind Shawn Hunter in Boy Meets World. “It’s such a flattering haircut,” Rosak explains, “there is a way to modify this cut to be exactly what you need and want.” She suggests centering the part and creating a more bob-like look in the front to be key characteristics to updating this shape into the haircut the summer.

Roszak displayed her own rendition of the style on her Instagram. “The 90s heartthrob haircut,” read the caption of the photo, which featured 25-year-old artist Mariah Krey with a short, choppy style, exposing the back of her neck and giving her face-framing longer pieces in a middle part. With summer around the corner, there’s no doubt this short, but on-trend, style is bound to take off, with the likes of Florence Pugh opting for a similar dramatic chop recently.

For those looking to be a heartthrob with a bob (it’s a mentality after all), Roszak recommends taking your hair texture into consideration and modifying the style accordingly. “If your hair is very curly find a shape that maybe keeps a bit of length preventing the look from looking too round,” she says. Otherwise, experimenting with a voluminous blowout or texture spray will keep your new ’do on the ’90s theme. Don’t be afraid to let the ends on the back of your neck flick out also, it’s all part of the effortlessly chic nature of the trend.

NEXT UP
Beauty
No One Does #PamCore Beauty Better Than Pamela Anderson, Herself
Beauty
Storm Reid Tries Out A Y2K Girl Band-Favorite Hair Trend
Beauty
Dua Lipa’s ’90s Updo Is Hair Inspo For Your Next Night Out
Beauty
Hailey Bieber Just Got A Margot Tenenbaum-Inspired Blunt Bob
Style + Culture, delivered straight to your inbox.