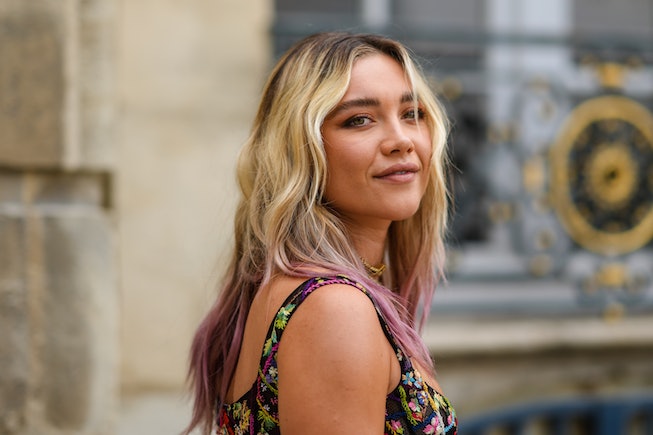 Florence Pugh has been in the mood for hair changes this year. In June, she dip dyed her hair purple (in true Y2K fashion), later she turned her blonde locks brunette for her forthcoming movie, The Wonder. This past weekend, the actress switched up her hair again in a major way, chopping it into a short pixie-mullet cut. Pugh posted the new look on Instagram with the caption “I did a thing” and #chopchopchop with a scissor emoji. The images show the star sitting on her bed with her hair wet, wispy bits in front of her face, and looking like it the cut had just occurred.

It’s safe to say that Pugh is making the short mullet really work for her. She’s even received the stamp of approval from many of her celebrity friends. “I am crying, stunning,” commented Ariana Grande on the post. Mexican actress Eiza González also said, “It’s a huge yes for me”. We have to agree.

Both the pixie cut and mullet have been having a major moment recently. RiRi herself returned to a close-cut pixie crop for the first time in over 10 years this year and, after lockdown buzzcuts, more people styling their newly grown out hair in the pixie style. Mullets have also been dubbed the “hairstyle of 2021”, with a huge recent revival seen by celebrities like Maisie Williams, Troye Sivan, and Miley Cyrus.

Pugh’s combination of both trends combines the best of both worlds, but we’re yet to see if her love of fresh hair cuts will continue and she’ll go with an even shorter pixie cut next time. In the words of Dwayne (The Rock) Johnson, who also commented on the post, “next chop you'll look like me". Either way, Pugh has proven herself so versatile in the hair department that we have no doubt she’d pull off any look.

NEXT UP
Beauty
Doja Cat Debuted A Fresh Buzz Cut On Instagram
Beauty
Sabrina Carpenter’s Beauty Evolution, From TV Teen To Pop Sensation
Beauty
Imaan Hammam Would Like To Have Her Own Hair Care Line One Day
Beauty
The Problem With “Clean Girl” Beauty