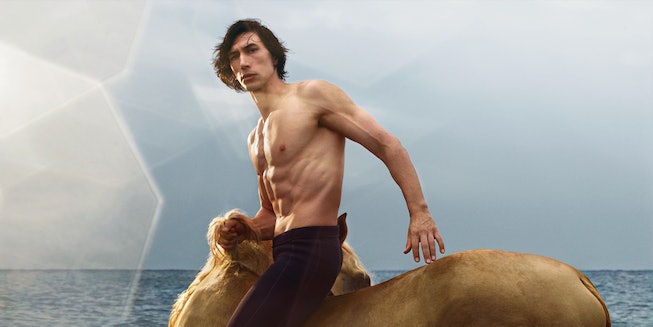 The internet has always been a divisive place if you’re discussing Adam Driver’s hotness. The Star Wars actor has often confused the masses with his unexpected sex appeal, from his unhinged breakout character in Girls, to his shirtless Star Wars scene, to that cream sweater photo with Lady Gaga.

Burberry’s new fragrance campaign, released today, has confirmed what Driver stans have always known to be true—Adam Driver is hot. Potentially even an unexpected fashion icon.

The video features Driver attempting to outrun a horse on the beach before becoming a shirtless centaur, all set the enchanting “Two Weeks” songs by FKA Twigs. Needless to say people are more than here for it and the meme potential is unparalleled (from that vein in his arm to the fact that he turns into a literal horse).

“People saying "Adam Driver isn't hot" - where's your god now????” Tweeted one fan. “If anyone asks "what's the female gaze"? The answer is: #AdamDriver's campaign for #Burberry,” wrote another.

If you’re actually interested in the fragrance (not just Driver’s rock-hard abs), Burberry Hero Eau de Toilette is available now on preorder. Riccardo Tisci’s first scent for Burberry, it’s described as fresh, luminous and bold, and an “enthralling marriage [story?] of strength and subtlety, power and compassion, athleticism and creativity.”

Shipping from August 9, in the meantime you’ll find us scrolling through more Adam-Driver-is-a-horse memes.