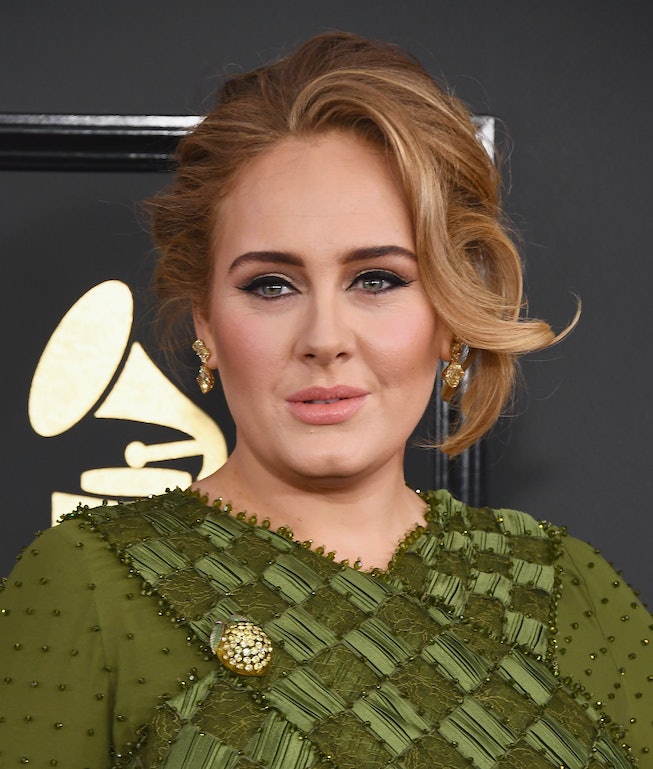 Like so many live music fans, Adele is clearly missing festival season. On Sunday, August 30, the Grammy-award winning performer paid a beauty tribute to Notting Hill Carnival, donning a festival-inspired outfit. The photo was intended to serve as Adele's way of virtually joining the annual London musical event, but her chosen look has divided the internet, as some accused Adele of cultural appropriation.

The photo in question features Adele wearing a bikini top that's imprinted with the Jamaican flag. She paired the top with tie-dye pants and a set of yellow feathers that sit on her shoulders. However, it's her chosen hairstyle that's particularly struck a chord with social media, as Adele was wearing Bantu knots.

Ebony reports that Bantu knots are believed to have originated in 1898. "Bantu knots also are known as Zulu knots because the Zulu people, a Bantu ethnic group, are the originators of the look we love and wear today," Gerilyn Hayes, NaturallyCurly branded content editor told Ebony.

Some have questioned Adele's decision to wear the hairstyle, including journalist Ernest Owens, who tweeted, "If 2020 couldn't get anymore bizarre, Adele is giving us Bantu knots and cultural appropriation that nobody asked for." Other Twitter users agreed, writing, "It is NEVER okay for yt girls to wear hairstyles like bantu knots, cornrows, or braids. idc what anybody says" and "If you spent the whole summer posting #blacklivesmatter and don't see the problem here, you were lying the whole time."

However, some have defended the singer, including Parliament member David Lammy. "This humbug totally misses the spirit of Notting Hill Carnival and the tradition of 'dress up' or 'masquerade' Adele was born and raised in Tottenham she gets it more than most. Thank you Adele. Forget the Haters," he wrote.

Others also questioned whether it was truly an instance of appropriation, tweeting, "There's absolutely NOTHING wrong with Adele wearing Bantu knots or African clothing. In fact, it's beautiful. Cultural appropriation is when she or others claim that it's theirs" and "The point of appropriation is adopting something and using it for something other than in the way its unintended to the culture or offensive to the culture." One user also pointed out Adele's possible intentions with the outfit, writing, "The Notting Hill Carnival that takes place at this time of year is a celebration of West Indies heritage in London/UK. Adele grew up in Tottenham, one of the largest Jamaican diasporas in the UK. This seems a strange thing for Americans to now get offended about."

As of Monday, August 31, Adele had not yet addressed the comments.

See the photo for yourself, below.