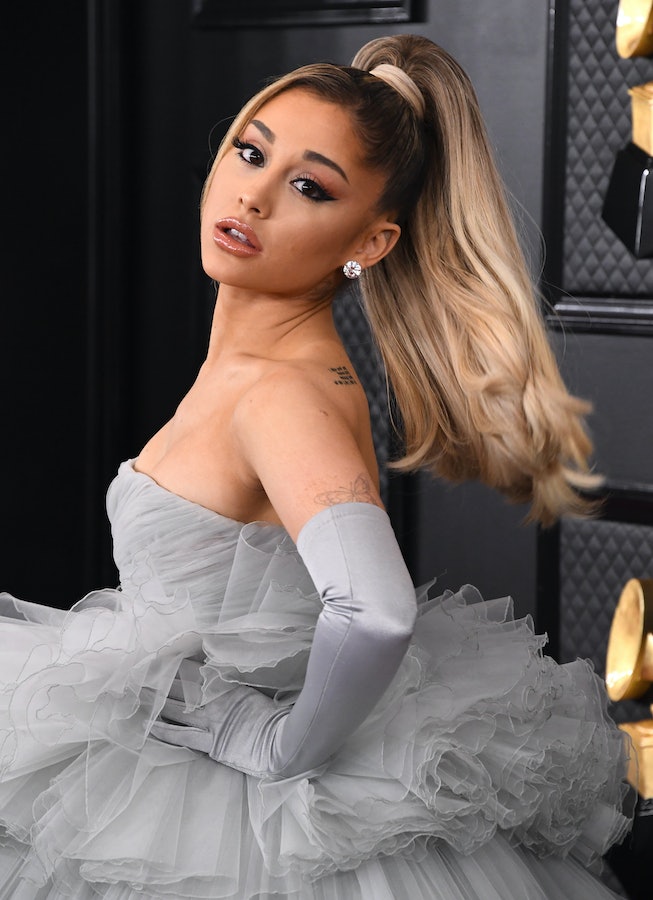 In true Ariana Grande fashion, her recent birthday festivities included a series of major transformations to her iconic hairstyle. Turning 27 over the weekend, the pop star celebrated with an elaborate Midsommar themed party. From the party's stunning flower decor to Grande's all-white outfit, the day was truly fit for a May Queen.

Throughout her birthday weekend, the "7 Rings" singer cycled through three different hairstyles, beginning her pre-birthday without her extensions. Posing for a photo with her real hair — which currently hits just above her shoulders — Grande looked to the day ahead, writing, "almost 27."

Although her hair showed no hint of the curls that once appeared in a previous natural hair photo, the shortened style was a far departure from her usual lengthy updo. However, the short style didn't last long, as the following day, Grande posed for her first birthday selfie.

In the image, she wore her hair in a long ponytail, the ends curling below her shoulders. She accessorized with lashes covered in flowers, and tagged the makeup and hair team responsible for the look, including Michael Anthony, Josh Liu, and Mimi Cuttrell.

She later changed her hair again, adding a towering hairpiece made of flowers. The elaborate accessory was situated atop her head like a headband and coordinated perfectly with miniature crowns worn by her mom and brother. Explaining the choice of outfit and hair, she wrote, "My friends and i went with a midsommar theme because help me."

Later photos featured Grande wearing a matching flower overcoat and white high heels. Beneath the floral garb, she wore a white top, which showcased her extensive collection of tattoos. She concluded the day with a note of gratitude, writing, "thankful and here and very much 27."

It's not exactly surprising that Grande chose a Midsommar -inspired celebration. Back in April, A24 held an auction featuring items from the film, and at the time, Grande had attempted to win the movie's featured dress, Bustle reported. While Grande ended up not winning the dress, it's clear from her birthday that she was able to recreate a look that was very much her own.

Follow along with the birthday girl's brief hair journey, below.

NEXT UP
Beauty
September 2022’s Best Beauty Launches Will Keep You Cozy And Cute Throughout The Fall
Beauty
The Most Viral TikTok Beauty Products of 2022
Beauty
30 Latinx-Owned Beauty Brands You Will Love
Beauty
It’s Official, Y2K Beauty Trends Still Rule The Runway