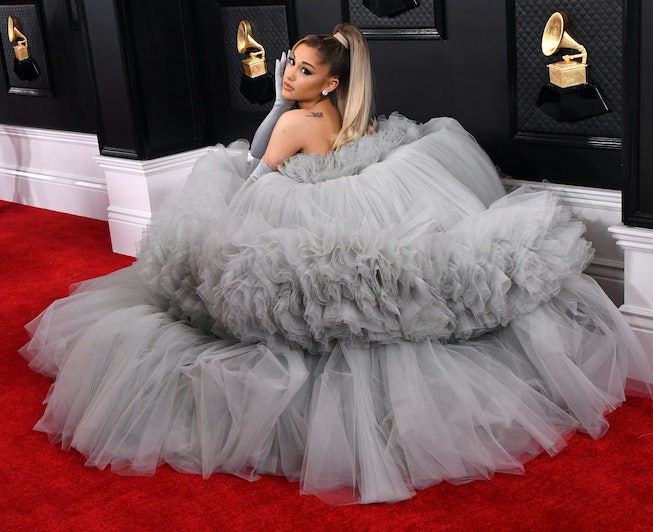 When it comes to understanding Ariana Grande, the secret to this pop star might be hidden in her ink. Since 2012, Grande has steadily added, and even covered, to her growing tattoo collection, using her body as a means of expressing all that she loves. From artwork that pays homage to Harry Potter to dainty details inspired by nature, Grande has covered much of her body in artwork, and this is your guide to her tattoos.

Although not all of her ink is permanent, many of the singer's tattoos have remained a part of her history, showing up in red carpet photos and Instagram selfies. The pieces have come to give fans a bit of backstory to the artist, revealing that she loves Pokémon, Breakfast at Tiffany's, and her past is filled with adorable family nicknames. While she hasn't outright publicly revealed her every tattoo, fans have been keeping tabs, and now you can, too.

Below, keep tabs with an updated guide to Grande's every tattoo.

In a selfie shared on May 11, 2020, Grande revealed an upper left arm tattoo that featured the word "baby" written in a scripted font. As the updated Ariana Grande fan tattoo wikipage notes, it's unclear when the tattoo was done, but this was the first time the singer shared the work with fans.

On May 4, 2020, Grande revealed a new butterfly tattoo on her upper arm. The darkened butterfly design was debuted just months after she appeared at the Grammys 2020 with her first butterfly tattoo, which is also on the same arm, Insider reports.

At the conclusion of her Sweetener World Tour, Grande commemorated the major milestone with new ink. Producer and Grande's collaborative partner, Tommy Brown, shared a picture on Instagram of Grande's tattoo, which was a shortened version of the title of her hit album, PopSugar reported.

During an August 2019 meet-up with fans, Insider reports that the fan-run Twitter account, @arianasnewsig, noted that the singer appeared to have gotten a wing tattooed inside her ear.

Quote From The Truman Show Tattoo

Grande turned to her favorite tattoo artist, Mira Mariah, to get a quote from The Truman Show inked on her back, Refinery29 reported. The quote reads, "In case I don’t see ya, Good afternoon, good evening, and good night!”

The pop star has frequently spoken of her fondness for Jim Carey, the movie's star, in the past, and this tattoo has been frequently spotted during many of Grande's appearances.

Also spotted during a run of fan meetings, Refinery 29 reports that it's unclear when Grande got these finger tattoos, which featured a set of chevron lines and an eye.

A Branch Of Leaves

Relaxing after preparing for continued touring, Grande showed off this stomach tattoo, which featured a long branch adorned with leaves.

This particular Grande tattoo came with quite a story. In January 2019, Grande shared a picture of her latest tattoo, which she had intended to be the title of song "7 Rings" in Japanese. However, as Refinery29 reported, her tattoo accidentally read shichirin, which is the name of a grill. She later attempted to fix the tattoo, but it's unclear whether she ever got the spelling correct.

Shortly after the release of Pokémon Let's Go: Eevee, Grande confirmed that she had been playing and loved the game, sharing this Eevee arm tattoo.

Revealed near the beginning of January 2019, Grande shared this arm tattoo — which read "Let's Sing" in Japanese — with her Instagram followers, Refinery29 reported.

After being named Billboard's Woman of the Year, Grande naturally celebrated by getting a new tattoo, Refinery29 reported.

Grande revealed this ink tribute to Mac Miller in December 2018. As Bustle reported, Myron is the name of Miller's dog.

In this photo, you can also see the set of what appear to be stars on Grande's foot.

In the accompanying video for Grande's single, "breathin,'" fans spotted two new tattoos — a black heart behind her right ear and the word "R.E.M." which was the name of one of her singles, Refinery 29 reported.

Grande isn't shy about showing her adoration for the art she loves, including the film Spirited Away. After sharing a few tweets related to the film in August 2018, she later posted a number of images to her Instagram Story that showed her getting a lower arm tattoo of the film's main character, Chihiro, Billboard reported.

She accompanied the Story images with a quote that further explained her adoration for the film. "Chihiro's growth into a capable individual is a core factor to the movement of Spirited Away's plot. During her adventure in the Spirit World, she matures from an easily-scared girl with a child-like personality to match her age to a hard-working, responsible, and brave young girl who has learned to put her fears aside for those she cares for," she wrote.

She might be one of the world's biggest pop stars, but Grande doesn't forget where it all started. In January 2018, she shared an Instagram Story of her "561 tattoo," which is the area code from her childhood hometown of Boca Raton, Florida.

Although the exact specifics of this thigh tattoo haven't been determined by fans, it has shown up on a number of Grande's photos.

Posing with a pup, the pop star gave a look at the black ring which surrounds one of her fingers.

Look closely and you'll see the slightest hint of Grande's lightning bolt tattoo. According to her fan wiki, the work was first spotted in 2018 when Grande shared a photo on her Instagram Story of the work.

A fan of Harry Potter, Grande got this "Luminous" tattoo inspired by a popular spell from everyone's favorite boy wizard.

Grande and friends got matching "H2GKMO" tattoos, which stands for the phrase, "Honest to God, knock me out." At the time, she and former fiancé Pete Davidson had shared matching tattoo versions of the phrase.

Grande has quite the affinity with clouds, using the emoji frequently in her social media posts and as the shape for her Cloud perfume bottle. While posing with a Starbucks cup, she gave Instagram followers a look at her tiny cloud finger tat in 2018.

Following a terrorist attack that occurred at Grande's May 22, 2017 concert in Manchester, she debuted this bee tattoo. The insect is the symbol of the city, and when Grande shared a picture of the art, which sits just behind her ear, she wrote, "forever."

Sharing this tattoo with Instagram followers in 2016, this "babydoll" tattoo was reportedly done as a tribute to Grande's Nonna, as she frequently calls her granddaughter by this nickname.

Completed in 2016, Grande reportedly got this finger tattoo on a trip with former boyfriend Mac Miller.

This was Grande's second heart tattoo. The right-hand ring finger art joins the heart she got on her foot in 2012. She later debuted a third heart, hidden behind her right ear, that was nearly hidden in the release of her video for "breathin," Refinery 29 reported.

Completed in honor of her single, "Honeymoon Avenue," Grande's honeymoon finger tattoo was spotted by fans in 2015. It's believed that around the same time, she also got an additional finger tattoo, which featured a Hebrew phrase that stands for "guarding and protecting" from "the evil eye and from envy," Insider reports.

Grande may have been hinting at the title of her future album Moonlight with this neck tattoo, Insider reports. The small crescent moon appears on the back of her neck and she first shared the tattoo with fans in 2015.

This 2015 ink, appearing on Grande's rib cage, is theorized to be a tribute to her grandfather. The word is Italian for beautiful, and according to the Ariana Grande fan tattoo wiki, her grandfather often referred to Grande as "bellissima."

Completed in 2014, Grande shared a peek of this neck tattoo on her Instagram. The phrase "mille tendresse" is French for "one thousand tresses," and as Insider reports, the quote is used in one of Grande's favorite films, Breakfast at Tiffany's.

In a 2012 video posted to her YouTube, Grande shared the process of getting her first tattoo — a heart on her foot.