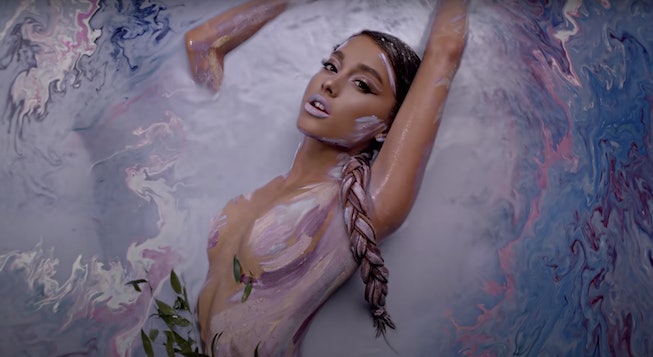 Ariana Grande just doesn’t let up. The newly married pop star has stayed busy since her honeymoon. She dropped four new live-performance music videos from her Positions album, and now, has just released her newest fragrance.

God is a Woman Eau de Parfum, titled after her 2018 hit, comes in hot as the seventh scent in Ari’s perfume line. It’s finally available after she teased the details of the launch on her instagram over six weeks ago. This is the artist's first ever naturally derived, 100% vegan and cruelty-free fragrance, making it one of her most anticipated launches yet, for more reasons than one.

The new fragrance is an enthralling combination of Mother Nature’s finest, from earthy musks to delicate fruits and flowers. The perfume opens with the light freshness of juicy pear and a healthy helping of Ambrette (which is known for being a soft, skin-like scent), which gives way to Turkish rose petals and Orris at the heart, and leaving behind a dreamy dry-down of creamy cedarwood and Madagascar vanilla. It’s what you might image Ariana Grande herself to smell like after emerging from frolicking in a magical meadow, as she is wont to do.

Although this fragrance’s naming convention similar to previous scents, titled after a song, the new perfume’s bottle is a departure from the past fragrances. Previously, her scents were housed in curved and whimsical bottles with faux fur accents and cartoon clouds. God is a Woman, however, is outfitted in a simple, yet elegant rectangular lavender glass bottle surrounded by a stone-like holder. The perfume's entire design creates an outline of what looks like a beautiful gemstone—perhaps a diamond in the rough.

Ariana Grande’s new God is a Woman Eau de Parfum comes in three sizes starting at $44 for 30mL and is available exclusively on Ulta.com and will be in stores nationwide on Sunday, August 1st.

Below, take a closer look at the new fragrance and Grande in the campaign.