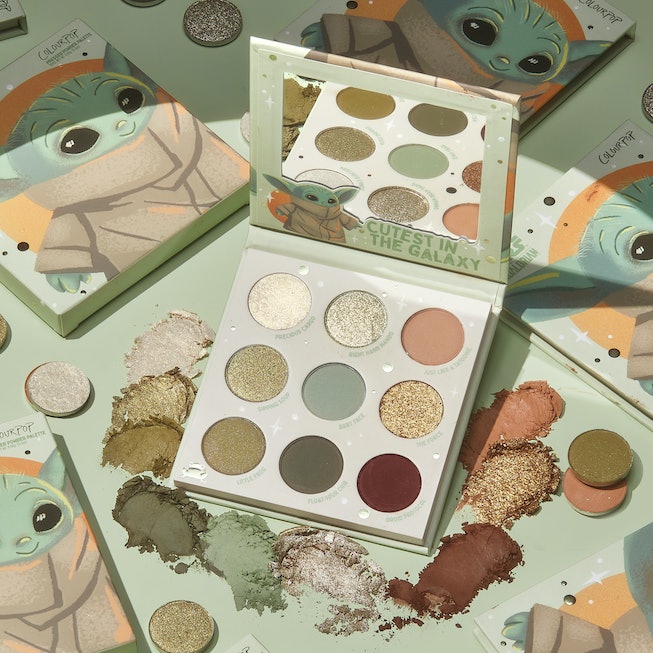 Appearing in the popular Disney+ series, The Mandalorian, Baby Yoda became a bonafide Internet celeb, appearing in countless memes and tweets. As the Star Wars-based series prepares for its October 30 return, ColourPop announced its teamed up with Disney, creating a Baby Yoda-inspired eyeshadow palette.

Arriving to ColourPop.com on October 29, The Colourpop The Mandalorian The Child palette will retail for $16, and it's the latest limited-edition collaboration from the beauty brand. Other recent pop culture-inspired collections from the brand featured Sailor Moon and Hocus Pocus.

Both the inside and outside of the palette feature illustrated versions of the character, and inside, the nine-pan palette features a mirror with Baby Yoda seated next to the phrase, "Cutest in the galaxy."

Matte and shimmer shadows are included in the palette, and along with soft green shades inspired by the character, there are multiple neutral colorings, and one striking rich brown. Colors are named for moments from the series, with hues including a pressed glitter-filled gold called The Force, a dark matte peach dubbed Just Like A Tatooine, and a subtle green named Baby Face.

Fans will have two chances to get their hands on this limited-edition launch. Along with a ColourPop.com drop on October 29, the palette will be available at Ulta on December 6.

Admire the adorable palette, below.