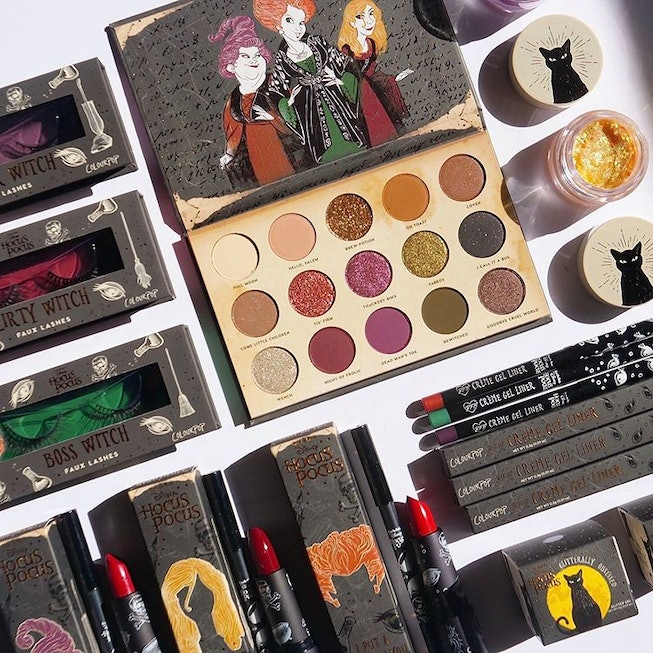 The season of all things scary has arrived, and ColourPop is getting in the Halloween spirit with its latest launch. On Wednesday, September 30, the brand will release an entire makeup collection themed around the popular Disney Halloween movie, Hocus Pocus.

Tricks and treats aren't required to get your hands on the goodies, but based on the response from social media, you'll want to act fast when it debuts at 10 a.m. PST. Teasing items featured in the collection over the weekend, ColourPop revealed every bewitching beauty item that will be available.

Along with three red-colored lipsticks, that are each packaged to pay tribute to the film's starring sisters, the collection comes with three sets of false lashes, two jars of glitter gel — one in purple and one in gold —, and three gel eyeliners. The featured item is a 15-palette, which features shades named for moments from the movie, and colors inspired by autumn.

Swatching out the palette on Instagram, ColourPop gave followers a closer look at the shades, including those that featured matte and shimmer formula. Shadow hues include a rich, sparkly gold called Brew Potion, a matte brick red named Night of Frolic, and a shimmery purple named for Thackery Binx.

This year, ColourPop has leaned heavily into makeup inspired by pop culture. After introducing a massively popular collection devoted to Sailor Moon, the brand released a Mulan-inspired line and a Candy Land-inspired collection.

Get the official Instagram sneak peek of the launch, below.