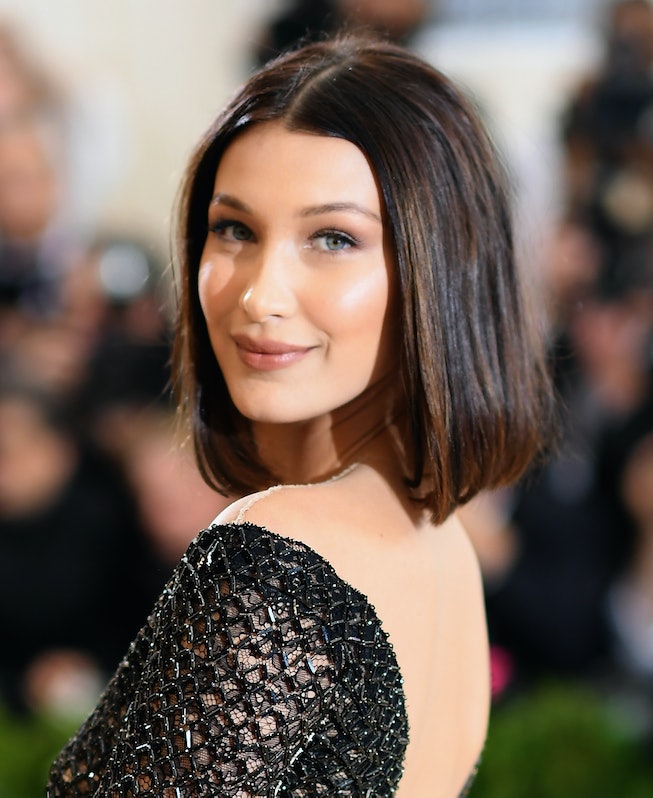 The world of beauty has a new icon to emulate, as Bella Hadid has given her stamp of approval to a Rugrats-inspired hairstyle. After recently debuting a collection of chunky orange highlights, the model took her '90s-esque beauty routine one step further, and revealed an updo with major Rugrats vibes.

Sharing a mirror selfie on Monday, January 4, Hadid pointed out how her hair resembled the very unique look sported by Chuckie Finster of Rugrats. For her glam version of Chuckie's hair, she started with a pulled back ponytail.

However, in lieu of a traditional ponytail style, pieces of her hair were pulled apart and slightly curled. The style gave the appearance of separate tendrils, each going its own which way. Although she wasn't wearing purple glasses or a space-inspired top, she likened the look to the Rugrat, and followed up her selfie with a picture of Chuckie.

Hadid didn't share whether the style might be featured in an upcoming photoshoot, or was just for fun, but her comparison to the cartoon had Instagram commenters sharing their approval. Zoë Kravitz gave the style "so much yes," while Indya Moore replied with a simple "OMG." The picture also received a double tap from Billie Eilish, Paris Jackson, and Chloe x Halle.

Hair experts didn't predict a resurgence of Rugrats-style when it came to possible 2021 trends, but with the year only just beginning, it might be time to consider a beauty routine inspired by your favorite animation.

See the Rugrats-inspired style for yourself, below.