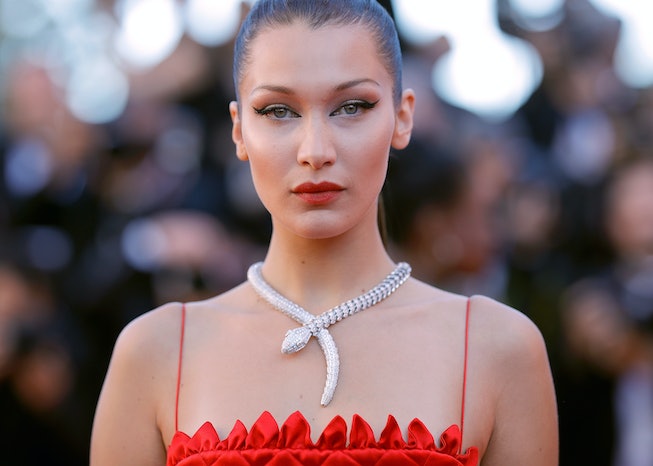 Bella Hadid is closing out the year with a fun change in her hair. The once DIY stylist appears to have gotten the help of a hair professional, and after previously wearing multiple iterations of bangs, she's resumed playing with color. During a New York City outing on Tuesday, December 22, the model was spotted with bright orange highlights.

Initially hinting at the change with a closeup selfie on her Instagram Story, the color was more apparent in outdoor lighting. According to her Instagram tag, she worked with Evanie Frausto on the new color.

Based on photos of her new look, it appears that this dye job relied on '90s-inspired chunky highlights. Her hair was pulled up in additional photos, but the color wraps around much of her head, and is particularly noticeable (and chunky) near the front of her hair. Hadid and Frausto had previously worked on a similar orange coloring for a recent photoshoot, but this look is bolder, and features thicker swatches of orange.

This isn't the first time that Hadid has embraced highlights. Earlier this year, she added touches of honey gold to her hair, livening up her dark brunette coloring with light pops of color.

It remains to be seen whether this coloring is permanent or temporary, but Hadid is already getting a jump on an expected hair color trend for 2021. Her face-framing pieces are a spin on block coloring, and as always, fantasy coloring will remain a popular option in the new year.

See the orange look, below.