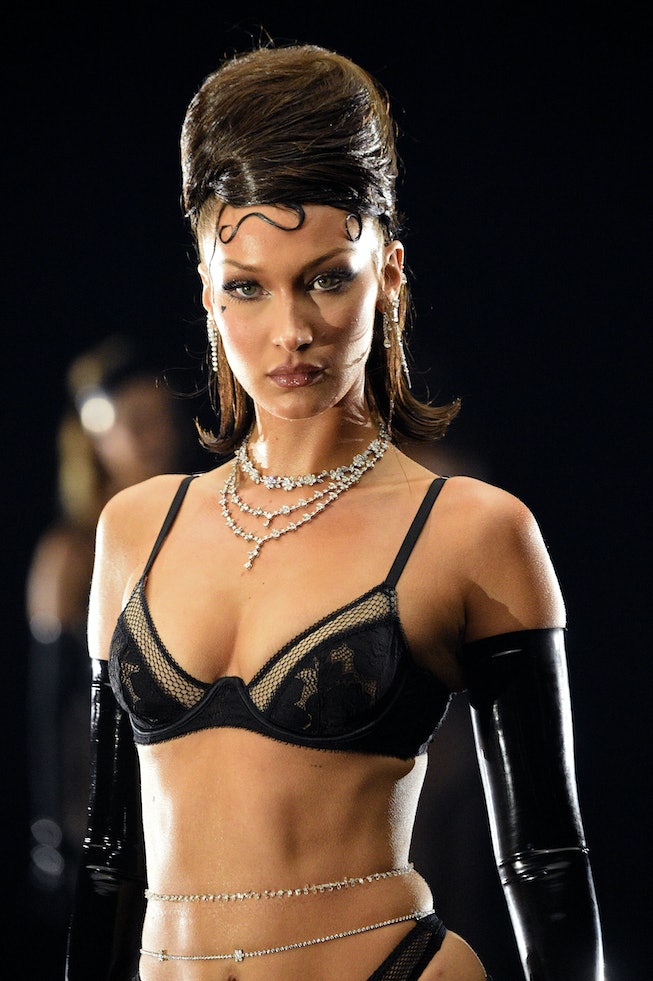 After months of donning dark brunette hair, Bella Hadid took a hair coloring cue from this season of golden hues. On Tuesday, October 6, the model was spotted leaving a New York City salon, and there's no mistaking that she added light, golden brown honey highlights to her hair.

Wearing her hair down and far past her shoulders, Hadid took on a very '00s-inspired style, which included a deep middle part, chunky highlights, and subtle waves. The look was completed by Jessica Gillin, stylist and Jenna Perry, colorist, both of Jenna Perry Hair Studio.

She did share a blurry image of the style, presumably after the dye job was complete, but she kept the focus on an import message, captioning the picture, "I'm a voter." Despite the out of focus nature of the selfie, you could still make out the seamless hair color transition from chocolate brown to honeyed brown.

Her new October look is the latest in a series of continued hair changes for the model. Recently sporting an impressive bouffant for the Savage x Fenty show, Hadid previously tried acting as her own hairstylist. Sharing the complete haircutting process on Instagram, the model had trimmed her own bangs during quarantine, and she later extended the same styling courtesy to a friend. Her role as temporary stylist didn't last long though, as her return to work was marked with a selfie of her curly hair.

Take a look at her highlighted hair, below.

NEXT UP
Beauty
Bella Hadid’s Clip-less Updo Is Going Viral On TikTok
Beauty
The Best Beauty Looks From The 2023 Grammy Awards
Beauty
No One Does #PamCore Beauty Better Than Pamela Anderson, Herself
Beauty
Dua Lipa’s ’90s Updo Is Hair Inspo For Your Next Night Out
Style + Culture, delivered straight to your inbox.