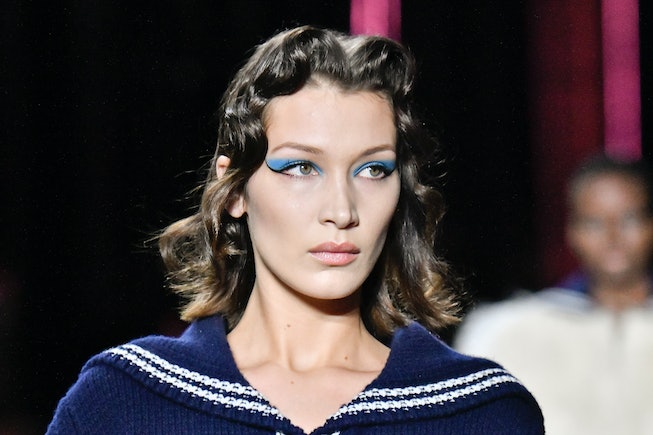 As social distancing continues on, Bella Hadid took on the role of personal hairstylist, and gave herself some new bangs. She announced her temporary tenure as DIY stylist on Sunday, April 19, sharing a selfie with the caption, “I cut my bangs.” And while many hairstylists have warned against a DIY chop, it turns out that Hadid might be kind of an expert at giving herself some new fringe.

Along with a selfie that was taken post-chop, Hadid later shared the new ways in which she could wear her hair. In addition to an updo with straight, forward bangs, she parted the fringe to one side and posed in a very model-esque fashion to showcase the new trim.

The success of her own trim was apparently enough for Hadid to consider cutting the hair of others she’s social distancing with. A short time later, she shared a Story of her snapping a friend’s hair, and she asked followers to vote on whether they’d trust Hadid with their hair.

Although her trim is a permanent change, Hadid previously had some beauty fun with TikTok followers. Earlier in April, she used a filter to envision a future with gray hair, and while the change was only virtual, she certainly pulled it off.

Recently, more and more celebrities have turned to DIY hair changes. Grappling with the new normal of social distancing, stars like Rosaliá, Ariana Grande, Kylie Jenner, Dua Lipa, and Bretman Rock have all unveiled coloring and styling changes via their social media.

If Hadid’s trim has you contemplating a similar change, hair styling experts previously shared their advice with NYLON. In addition to ensuring that you have the right tools, it’s also important to be mindful of your face shape and the type of bangs you envision having.

If you are feeling ready to make the change, get some hair inspiration via Hadid's selfies posted to Instagram, below.