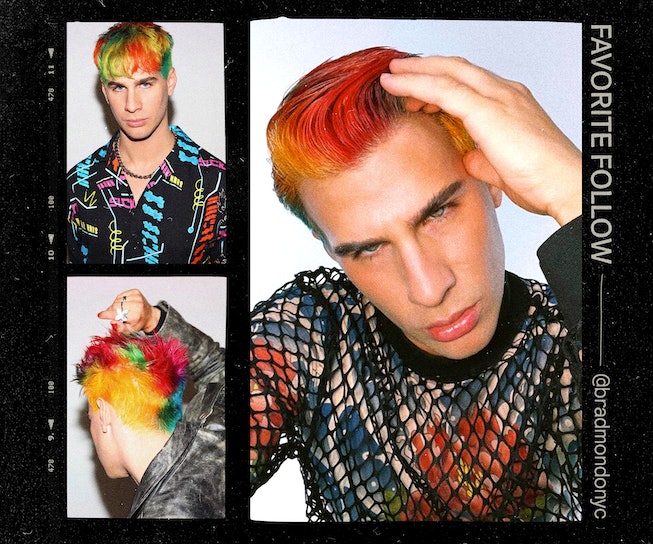 If you, like everyone else, tried cutting or coloring your hair at home for the first time over the past 20 months, you’re already familiar with Brad Mondo, the hair educator extraordinaire of YouTube. His videos can teach you how to cut your own bangs, restyle a wig, or wave your hair with a flatiron, but he is best known for his “Hairdresser Reacts” series, in which he watches and comments on DIY hair transformations. As he watches the home videos, he lovingly and lightheartedly offers support, empathy, and advice from behind his laptop. It’s a shame that the aspiring hairstylists can’t hear him in real time. Although, as his fame has grown, it seems more people are trying to make Mondo proud by following his advice. Whether they pay close enough attention to get a good outcome is another story.

Mondo’s father was a hairdresser, so it seemed predetermined that he would become one as well, even though his rebellious spirit tried to convince him otherwise. He dabbled with different ways of expressing his creativity before coming to terms with his destiny. “I think when I had to make a decision I thought, ‘I don't want to go to college, I'm a creative person, I just want to go into the workforce immediately’.” He knew where he wanted to go, but not necessarily how to get there. “I had very big dreams. Hair was definitely my passion, but I also wanted to be a YouTuber so badly. I didn't originally know I could combine the two. I didn't see the path yet.” Four years later, things have shaken out well. “Then I ended up creating the path and it worked out,” he reflects.

Once he hit his stride on YouTubeNow, Mondo observed that he has had a major influence on DIY hair videos: “There's not as many people posting hair fails... I have to dig to find anybody messing up their hair,” he says. Many times, mid-video he will get a shoutout: “They're like, ‘I followed Brad Mondo's tutorial, I'm now going to try to do it myself,’ and often they get a good result.” Perhaps he’s saving the world one potentially traumatizing hair transformation at a time.

Below, he discusses his hairdresser roots, the joy of hair color, and translating YouTube fame into his product lines, XMONDO Hair and XMONDO Color.

On His Hairstylist DNA

“I grew up in my father's salon. At first, I didn't want anything to do with the hair industry because I wanted to rebel against what my father wanted. I tried out all different creative fields at a very young age. I did photography, video, drawing, jewelry making, fashion — I wanted to try it all. But I kept coming back to hair.

“I worked at the salon growing up. I snuck into all the classes, and got into the whole hair scene. It was just so fascinating to me, going to the hair shows, meeting people, and traveling. I caved and realized, this is exactly what I want to do. I'm going to stop trying to go against it.”

“I had very big dreams. Hair was definitely my passion, but I also wanted to be a YouTuber so badly. I didn't originally know I could combine the two. I didn't see the path yet. Then I ended up creating the path and it worked out. I've been doing YouTube since around my freshman year of high school. It was a lot skits and stuff in the very beginning, and then I took a long break to focus on just doing hair and then I started posting tutorials about hair. After that, I took a break and went on a long trip to Asia where I vlogged everything I did. I was really trying to find my thing. My mom just kept pushing me to post on YouTube, she knew how passionate I was about it.

“One day I sat down and I started recording a reaction video to this girl ruining her hair and I thought nothing of it, really, but I thought it was an interesting concept to share my professional opinion about somebody damaging their hair. I had no idea it was going to get so big overnight. I remember the night after I posted it, I woke up to like 200,000 views. I had only like 5,000 followers, I couldn't wrap my head around it. But I knew, this was my chance, so I kept posting like crazy, I posted like five days a week and from then on it just grew.”

“From the beginning, I didn't want people to watch these videos and feel bad about themselves after they see me react to their hair problems. I know how personal hair is to everybody. Some hairstylists are like that, and they'll just tell you, ‘This looks terrible, we should cut your hair off.’ I'm just not like that. As my videos became more popular, that was even more important to me because the videos are getting millions of views, I don't want this poor girl or guy to feel like I was picking on them. I definitely developed the series over time. I wanted it to be more educational combined with the entertainment of pure reaction videos.

“I always try to keep it positive, even if I don't agree with something that somebody does with their hair, I try to give my professional opinion on it, and also always mention if it makes you happy, then that's all that matters. If it's fine with you, then it's fine with me. It's not that serious, hair grows back, and that's the mentality I've always had.”

On His Favorite Hair Makeover

“I really loved Charli D'Amelio's makeover. It was so exciting to see so many kids try to do it to their own hair after I did it. That whole makeover happened so quickly and we didn't even have a plan going into it. Charli said, ‘Just do whatever you want,’ and I was like, ‘Seriously? Okay!’ So we did that pink look and it became very iconic. I like when people try out my looks and try to recreate things, that's the most exciting part.”

On His Favorite Hair Color

“I think it was the rainbow, tie-dye hair moment. It was blues and purples and pinks and greens. I never thought in my life I would have rainbow hair. I wasn’t against it, but I didn’t think I was the person who would ever have something this bright. My whole life, I have had brown and blonde hair, so having colorful hair only became big for me when I came out with my color line. If I'm going to sell color, I might as well be using it. I just became this colorful highlighter of a person. I felt like it brought a lot of joy to my life, having so much color on my body. It really changes everything. It makes you want to wear brighter clothing. It makes you want to wear brighter makeup and exaggerate your whole look. Even the interior design of my home has become a lot more colorful. I feel like the longer I embrace colorful hair, the less afraid I am to do whatever I want for my entire life.”

“I always knew you could build anything off of a following on YouTube, and I was always very passionate about creating products. I knew that if I could gain the followers and I could share my knowledge about hair with the world and I could create something even bigger. Not even that long ago, so many different product lines all blended together and looked the same. It was all just white women with blonde hair in every single ad. I was over it. I always had in the back of my mind to create something that's very much me. Queer and edgy and interesting and for people that look like me and my friends.

“It was important to me to have amazing formulas that were innovative and to make things that I felt weren't on the market. My personal favorite is the Hydraglow shampoo and conditioner, which I use every time I wash my hair. It's the perfect balance of hydration without making hair oily or weighing it down. I love the blue color, too — I'm just such a sucker for pretty products. The WaveTech Wave Foam is our top selling product, it's the product that put us on the map for so many people. It gives you beautiful wavy hair without any kind of crunch. It'll also make sure it lasts multiple days on end, with no frizz. People are obsessed with it.”

On His Own Influence

“I definitely noticed an extreme decrease of hair fails over time. When I started doing these reaction videos, they were so many. There were big YouTubers doing their own hair and just completely demolishing it; you don't really see that anymore. Now it's mostly people trying to do it themselves and doing it successfully, which has made my job a little harder because I have to dig to find anybody messing up their hair. Often they're like, ‘I followed Brad Mondo's tutorial, I'm now going to try to do it myself,’ and often they get a good result. So, I guess I've helped people not damage their hair.

“When taking your hair into your own hands, the most important thing is to watch the video and listen, and then try it on yourself. Don't skip around, it's all important. That's the mistake I see the most.”

On Changing His Perspective

“I changed my point of view since the beginning of my channel. I very much pushed, ‘Go to the salon, go to the salon.’ I realized later that people who aren't going to salons are probably never going to a salon and that's okay. My point of view has changed. If you're okay with the possibility of something going wrong, you don't have to go to a salon, it's not a big deal. It's a very fun process doing your own hair. Even before I was a hairdresser, I was experimenting on everybody and it was just so much fun, so I don't blame people for wanting to do it themselves. I don't think you need to go to a salon unless you want it perfectly done.

“I do think that is so important to experiment with your hair and just try something new. People get really nervous about stepping out of the box, but once you do, it's not as big of a deal as you think. If you want to dye your hair pink or if you want to cut some bangs, do it. If you regret it, then you just grow them out. Just changing up your hair can really give you a new outlook on life.”